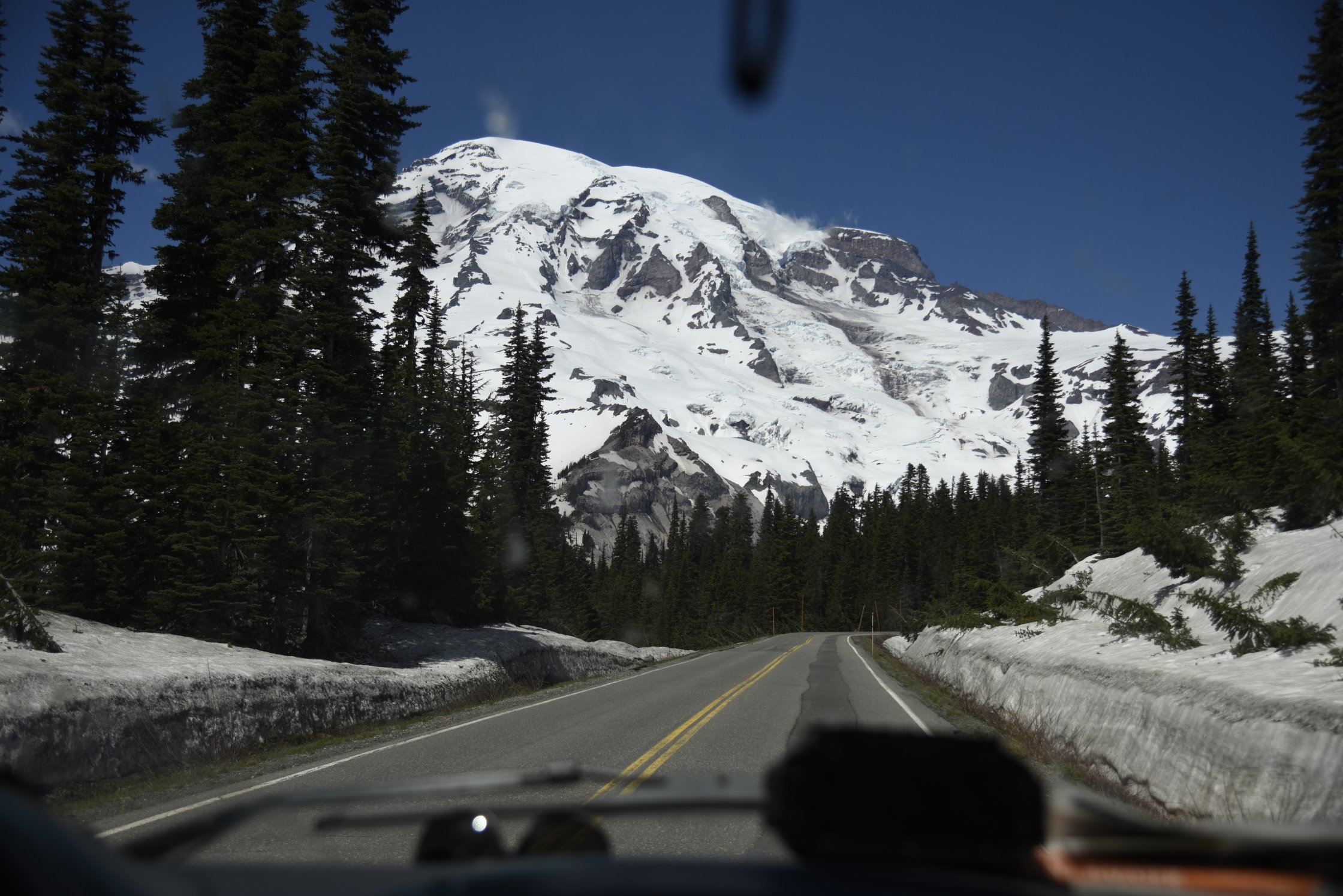 Mount Rainier is possibly the greatest ski mountain in North America with possible descent routes off of almost every aspect and face, from cutting edge ski mountaineering routes to mellow glacier skiing with runs up to 10,000 feet in length possible. It’s got it all and something for everybody. The Fuhrer Finger has become one of the classic and most often skied routes on the mountain due to its accessibility and the south facing aspect which improves stability in the spring when it warms up as well as offering up good corn snow potential. The route is a fantastic line that shares the same massive dome on the upper section off the summit as almost every other line, but then it gets technical in navigating crevasses and reaching the ridge that defines it at about 13,000 feet. The steepest section is getting off of the ridge at about 12,000 feet to the southeast where the slope reaches 50 degrees for only a few hundred feet and then mellows out before reaching the couloir at around 11,000 feet. There are some couloir variations, which can be nice to find different aspects for better snow. Past the couloir there still remains many thousands of feet of melow rolling terrain that can be carried all the way down the Nisqually Glacier Gorge to the Paradise Road Bridge, or one can cut out of the valley and bump back up to Paradise.

Park and get a permit at Paradise Ranger Station. There are two main ways to ski the Fuhrer Finger. One is to climb directly up the line itself and then ski back down, this can be helpful in figuring out the snowpack and route. Or, one can climb up to Camp Muir, then ascend the disappointment cleaver route. This is a much more frequently traveled route so the trailbreaking can be much less of a burden and route finding is very straightforward. However, it can be harder to navigate the route from the top down and one needs to be sure of conditions and aware of crevasses. For both routes start at Paradise and head up the Skyline Trail towards panorama point, the Fuhrer Finger route then heads to the northwest down onto the Nisqually Glacier, crossing it and up to the Wilson Glacier where one can camp among the rocks and safely out of reach of avalanche and rockfall hazard. The route continues towards the couloir in the rocks to the right of the Wilson Headwall. Stay on the ridge from here until around the 13,000 foot level at which point the glacier engulfs the rock and becomes completely glaciated to the summit. If going the Camp Muir route just follow the stand rout toe Camp Muir, camp light and carry up and over to descend the Fuhrer Finger.

The great thing about this line is it’s entirely visible from the road on the drive in and from the parking lot at the trailhead. It’s easy to get a good look at the entire route before committing to it. 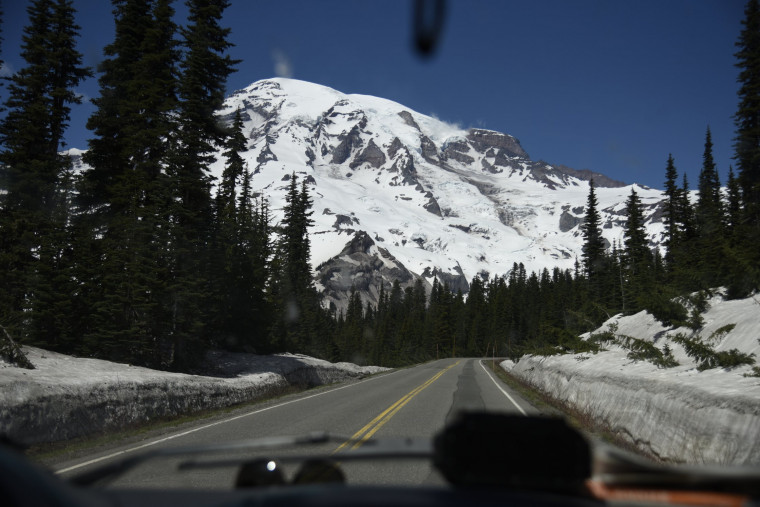 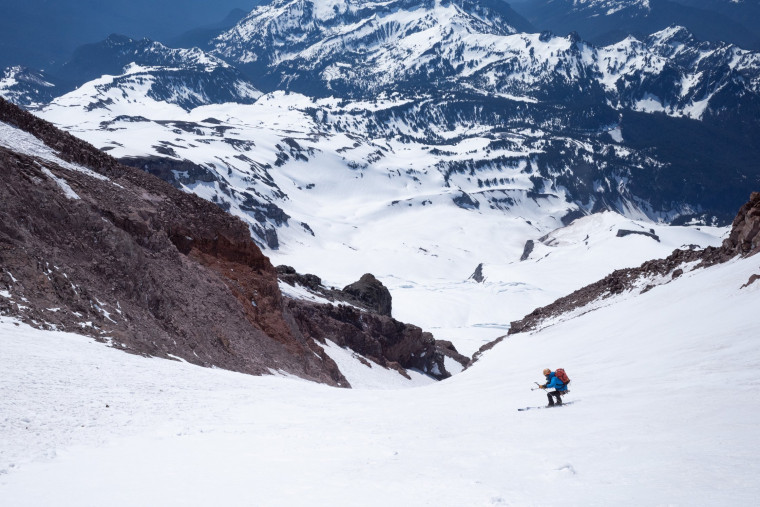 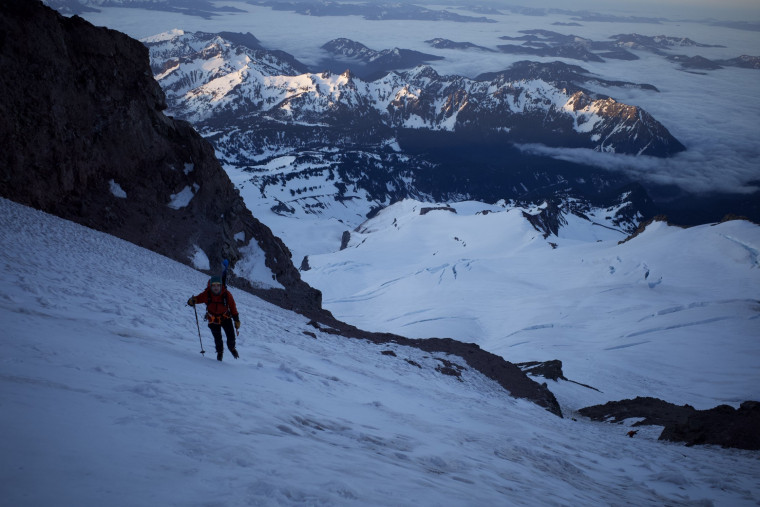 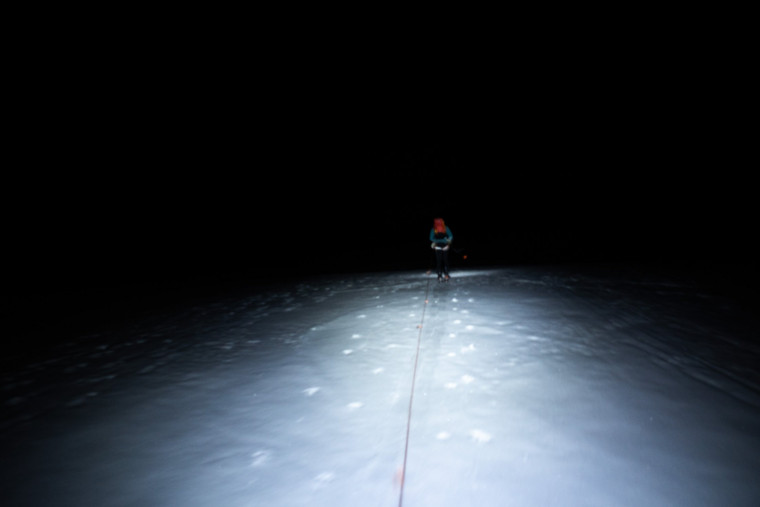 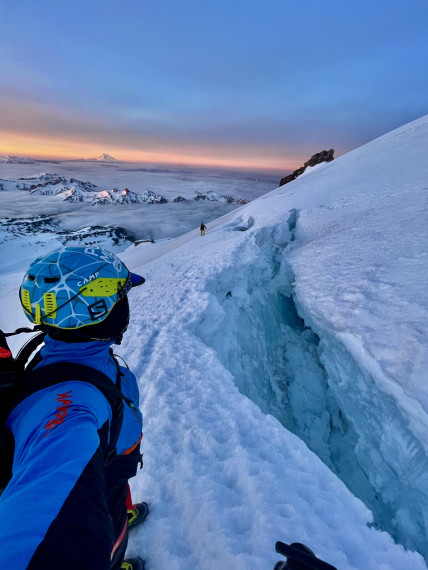 Yeeting myself over the sometimes optional shrund