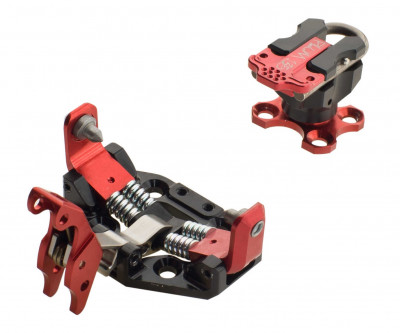 Plum, the French tech binding specialist, makes it a habit of putting weights in the names of their race bindings. The Race 135, as you can probably guess, weighs roughly 135 grams (4.8 ounces), making it the lightest of the company's offerings. Lightweight does not mean weak, however, as Plum has developed a reputation in Europe for making durable bindings that are machined with amazing precision. Constructed with Fortal® aluminum, Ertacetal® high strength plastic, and in the case of the Race 135, a titanium rear fork, these race bindings are engineered to withstand the abuse of everyday touring.

Plum recommends these bindings for experienced skiers that weigh less than 75 kilograms (165 pounds). For skiers over that threshold, they recommend the Race 145 binding which has a steel rear fork instead of the lighter titanium one found on the 135. Note that titanium forks typically experience more wear than steel but can be replaced as necessary.

Five Stars for the lightest option – by just a little bit – among Plum’s three different race bindings. This brief review focuses only on what distinguishes the 135 from the 145, so see my review of that “baseline” model for more details on the common features.

The only difference in the 135 from the 145 is the substitution of a titanium U-shaped spring for the steel version in the 145. The weight savings per foot are accurately portrayed in the model names.

Titanium is also softer, so somewhere after around 100,000’ vertical you’ll start to notice some notching. Depending on your weight, probably somewhere between around 200,000’ and 300,000’ vertical the notching might lead to a noticeably “rattly” feel while skiing, and eventually the notches will cause the pins to become hook-like so as to interfere with lateral release.

Fortunately you don’t have to worry about breakage, since the greater strength of titanium (as opposed to steel) will compensate for the notched metal until you retire the pins for either the rattling or the compromised release. And replacing the U spring entails only about a minute or so of work: punch out the retainer pin, slide out the old spring, slide in a new spring, and reinsert the retainer pin.
Comment on this review:

Do the separate ski crampon attachments fit B&D ski crampons?
Answer from Jonathan S
In summary, yes, they should fit.

In more detail, although all Dynafit, Plum, ATK/Sportiva/Hagan, and Trab bindings are supposed to be compatible with all Dynafit, ATK/Sportiva/Hagan, and B&D ski crampons, sometimes a little bit of filing/grinding is necessary.
(And the elongated baseplate of the Vertical ST/FT and the final generation Comfort requires a larger cutout.)
But the crampon clasp on Dynafit LTR, Speed SL, and Plum 134/145/165/185 is so basic, with some degree of bendability, that it is very tolerant of any slight deviations among crampons. (I think the Trab clasp is identical, but I’ve never used those bindings.)
Answer this question: