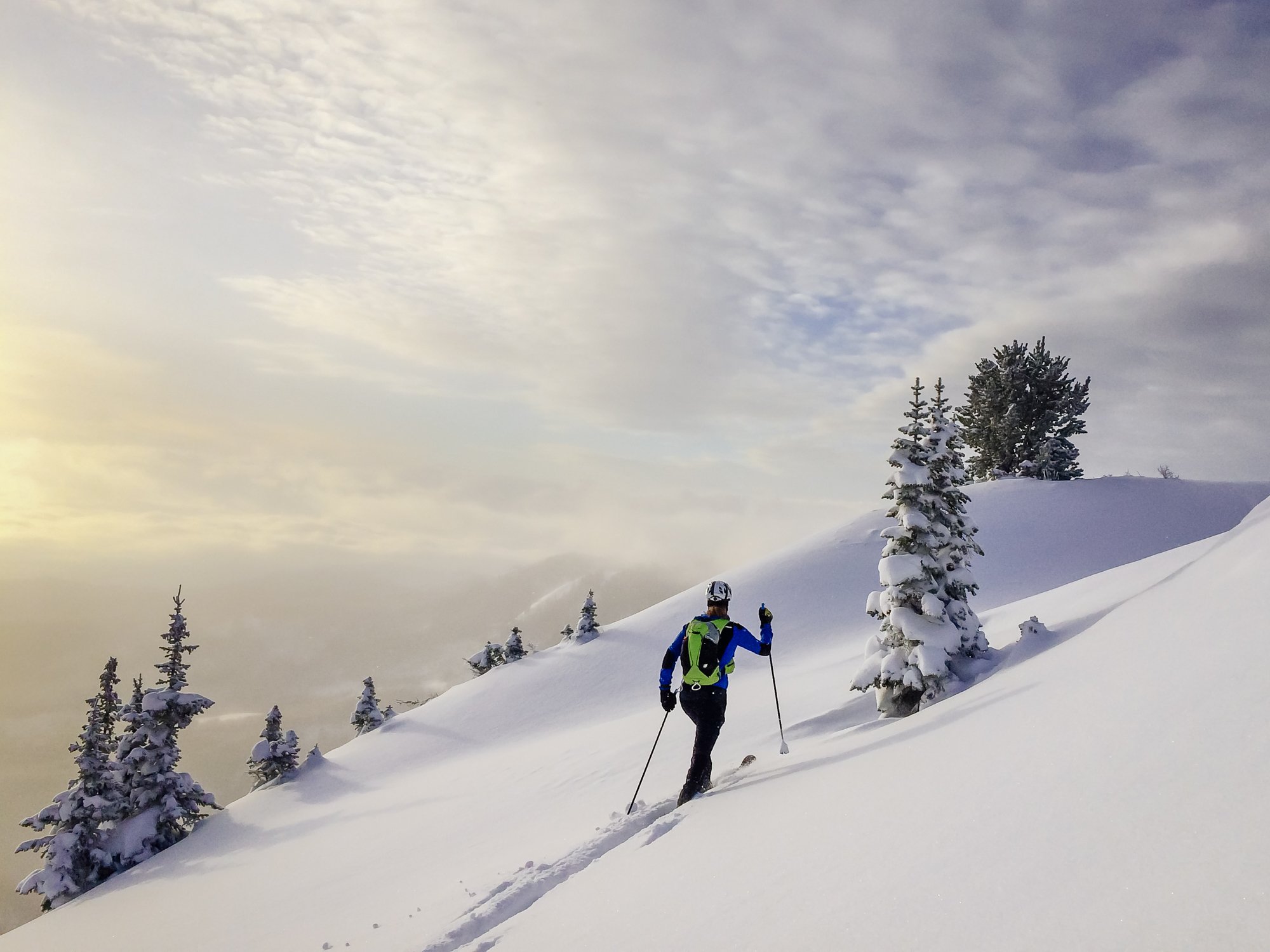 Let us guess, you spent one too many seasons drooling over fresh out-of-bounds lines from the (dis)comfort of a chairlift before deciding to do something about it. Us too. We applaud you for finally committing and getting the gear (and avy education) that’ll allow you to access the goods.

Now that chairlifts are in the rearview mirror, recognize that your uphill to downhill time ratio just got a big overhaul. Unless you have the uphill skills of Kilian Jornet and the downhill speed of a snowshoer in waist deep powder, you’ll most likely be spending around 90% of your ski day on uptracks. With that in mind, it’s important to take care of our ascending pathways of skiing bliss, especially since they’ll be shared with so many others.

And because it’s not part of the Avy 1 curriculum (yet?), we’ve taken it upon ourselves to compile a list of loose guidelines that will help you kickstart (kickturn?) your skinning career with good habits.

1. Trailbreaking is an art form. A beautiful track navigates micro terrain features, stays as safe as possible, minimizes excessive switchbacks, preserves the ski line, and avoids unnecessary obstacles. It takes many years to master but start your apprenticeship on day one by learning from others, analyzing skintracks, and envisioning where you’d put a skintrack in various scenarios.

2. Bootpacks and skin tracks are never the same thing. In other words, no booting in the skintrack! A swiss-cheesed skinner is annoying at best and terrifying at worst. If you must boot where others have skinned, do it adjacent to the track. For those tempted to break this rule, it’s worth noting that a skin track rarely provides better footing than the snow next to it. While booting, if the goal is to ascend, it’s best to go straight up!

3. Keep the uptrack pristine. It’s not always possible to avoid skiing on top of the booter or skinner (i.e. couloir skiing), but try! It may be your last run of the day, but that’s no reason to mess up the skinner for others.

4. If trailbreaking, aim for the Goldilocks approach. Not too steep, not too mellow - juuuuuust right.

5. Share the workload. The difference in effort between making a trail and following a trail is huge when the snow is deeper than a few inches. Within your group, this means trading off the task (unless someone wants to be superhero of the day.)

6. Trailbreaker’s rights. If your group catches up to the trailbreaking party near the top of a line you both are planning to ski, offer to concede fresh tracks and let them drop first.

7. Cool it on the Phish. Due to the inherent danger of backcountry travel, playing music out loud can limit the ability of everyone to communicate safely and hear warning sounds, such as whoomphs. Safety aside, it might be very annoying for others who seek the backcountry for solitude and to commune with nature. Best bet is to save the tunes for post tour libations.

8. Be conscientious of other parties in the area. Communicate with them whenever you’re within earshot so you can have an idea of where they’re headed and could potentially be at all times. Performing ski cuts, dropping cornices, and just skiing above people is both dangerous and rude.

9. If others behind you are faster than you, step aside and let them pass.

10. No peeing on the skintrack. You’d think this one would be obvious, but it’s disappointing how often folks desecrate the sacred skintrack. Either that or someone in the Wasatch has a leaky lemon lime Gatorade bottle. No matter where you end up peeing, cover it up with snow, AKA “flushing.”

Bonus tip: If you dig a snow pit on the way up, please fill it back in.

Seasoned tourers and beginners alike, what do you think - anything we should add or clarify?

A good list of things to consider. Once a trail is broken, it's often not worthwhile to make small changes to improve it although I sometimes can't resist. Most important is to look ahead and plan your route as you climb. I really hate going flat, then steep, then flat again, etc. When climbing in low visibility, it can be difficult to get it right so I try to be generous and rationalize that this must be the reason the uptrack is so erratic.
Hi Gord, thanks for trying to give the benefit of the doubt! I try to do the same...maybe the snowpack was different that day, e.g.
Another tip for old experienced trail breakers; when a newer younger skier takes over, don't ride their butt about every move, (unless you're about to cross a big avy slope or something). That way they'll build confidence, learn from their mistakes and might even ask your opinion occasionally. You can always have a route-finding debrief later.
Reply to this comment:

Post Reply
This may just be important to me, and no one else, but I think many trail breakers neglect widening their stance a bit to put all the follower's tracks about 4" apart. Like an xc track on a groomed trail. Widen not to Idaho senator standards perhaps, but a bit. If your boots are scraping each other, that's too narrow.
Reply to this comment:

This is a long overdue set of rules and guidelines.

Post Reply
I’ve started to question conventional wisdom on filling in snow pits... thoughts from others?

Leave a relatively small disturbance with a fresh face that’s reusable for other tourers? Or make a bigger (yes perhaps more shallow) disturbance by digging more to “fill yours in?”

Note: I don’t know anyone who has ever been snow snaked by skiing over an unfilled pit (or even heard of someone who has)
Ive come around in the trees and had to jump over a pit, landing uncomfortably on the upslope. I think if a human could fall in, just take some snow off the uphill side so it is easier to see and less dramatic of a drop. If its a little hand pit next to skinner, sure leave it for others to see.
Reply to this comment: 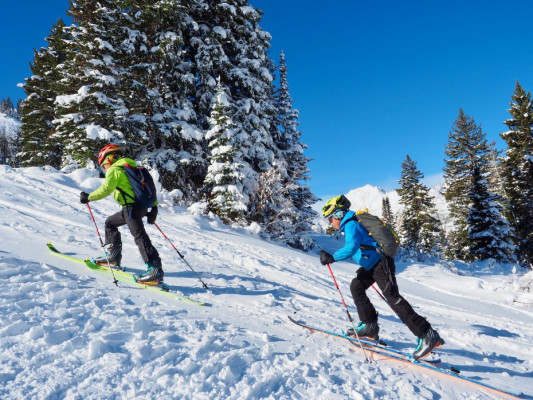 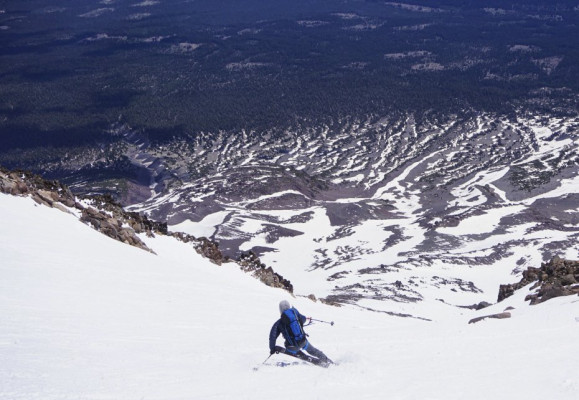