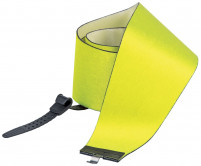 At the suggestion of my orthopedist, after he removed several drums of fluid from my left knee, high impact activities should be eliminated to help preserve the integrity of the joint. A full suspension mountain bike could be substituted for trail running and parkour is definitely out. However, I am pretty sure he said alpine touring would be okay as long as it did not include hucking cliffs. At least that what I heard and with that in mind, all my alpine gear is on it's way to the apres vie and is being replaced with touring gear.

The referenced AT kit along with a Fischer Hannibal, which has yet to be skied, has been my go to gear to for early season tours. The tours have been preseason at Alta Collins with one short tour up Summer Road. The Summer Road tour to above the Albion chair was on opening day and completed to do some recon work for the lift riders in my ski group.

The change of equipment to lighter, softer flex boots and much lighter, narrower skis has presented some challenges for me with regards to the down part. At 88 mm under foot, this is the narrowest ski I have ever taken off piste.

The up part with this gear as opposed to my heavier gear is much less physically demanding and my speed has increased which encourages me to tour more, farther out and take redos.

The fast part of the tour (down) forced me to rethink my approach to turning. I enjoy turning and the more turns the funner. The wider skis (+100mm to 118mm) I have been on are quite forgiving, rather enjoyable and it seems they almost turn by themselves.

I found skiing this ski with weight slightly forward in cut up light or heavy snow and centered in untracked seems to work well. Hmmm, isn't this how we are supposed to ski? I guess I was expecting something different for some unknown reason. On groomed and firm surfaces I had no problem getting the ski up and keeping it on edge without the tails washing out. (The knees did not care for this little exercise). In all cases, down the fall line is the direction in which this ski has not disappointed.

To summarize, this is a ski that is helping me have more fun. It encourages me to take more and longer tours as well as redo lines. It takes no effort to turn, holds an edge and is stable skiing down the fall line without riding it like a rented mule.
Comment on this review:

I have about 70k of vertical on a pair of these - between these and my skimo race skis, the rest of the quiver is not feeling much love frankly. I am 5'9", 150lbs, and ski the 170cm mounted with ski trab race bindings. I typically ski these with PDGs. On the ups, these guys deliver the goods in terms of competitive weight and nice balance point. On the downs, Fischer's ski building experience really comes through - for such a light ski, they are damp and feel solid and trustworthy while the low swing weight makes them playful in all the right ways.

These are not deep snow skis obviously and they are overwhelmed by deep heavy slop. But if the deep stuff is light, the lightweight for the uphill may be worth the trade for lack of slarviness on the downs. For for any day 6" or less, these guys rule. And obviously for long spring days in the saddle, I would not choose anything else. I did a week in the Selkirks over variable conditions (ice in the mornings, sun baked glaciers, boot deep blower on north faces), doing about 10K a day and these were the ticket.

Note that if you are trying to save some cash, you can pick up Pomoca-made K2 branded skins pre-cut for K2 skis that almost match these exactly - but I would skip it - the skins appear to be Pomoca's lowest grade (maybe made by interns on Friday afternoons?) and are basically garbage. Skip the temptation and give these babies the skins they deserve.
Comment on this review:

I really liked this ski. A couple of springs ago, spent many days skiing Mt. Sopris here in Carbondale on the Transalp 88, and found this ski pretty bombproof. Great uphill, and handled the steeps very well. Great edgehold. Damp. Good at moderate speeds.
Comment on this review:

Honestly, not my favourite ski. For the mellow meadow skipper, I can see it being enjoyable, but in multiple days skiing these boards I couldn't shake the feeling that I was going to fold or break them if I pressured the tip at all. In variable, chopped or heavy snow, I would certainly reach for something else. They do tour well. The balance point is comfortably located and the weight is competitive, but in the weight category I can think of quite a few skis I would rather be on. I'd even take a couple hundred gram penalty for something that skied better. That said, I do have a background in alpine racing and a more aggressive style on light gear than many, so feel free to take my review with a grain of salt.
Comment on this review: