The Hagan Chimera series of skis is known for its solid yet lightweight construction. The latest member with the most unique name, the Chimera Y-Flow, is a worthy contender for a true one-ski quiver for backcountry skiing and mountaineering. Incredibly light for its size, the Y-Flow is designed for skiers who want to ski a lot of vertical in varying conditions. With a mid-fat 87mm waist and a wide 300mm rockered shovel, the ski can handle aggressive powder lines. But with a relatively narrow 100mm flat tail, the "Y" will also give you confidence in tight quarters and suboptimal conditions. In either case, its light weight and skiability will entice you to lather, rinse, and most importantly, repeat. 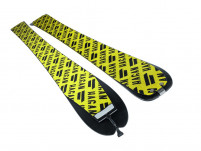 Hi, great review of the ski. What was your height and weight when you were skiing this ski.

Thanks
Answer from Jonathan S
5'8" & 145 lb -- although note that if you click on my name, you'll see my complete profile including other background info (relevant or otherwise)
Answer this question:

Overall: A caveated Five Stars for a very lightweight ski that floats far above its 87mm waist. The two caveats are that I haven’t skied it in very firm conditions (since I used it almost exclusively for backcountry powder), and that some skiers might not like the narrow tail (although it is being stiffened up somewhat for the 2014-15 season).

Background on product familiarity: I used the 2013-14 version in a 173cm for almost 44,000 feet of earned vertical, plus a couple long runs back through the resort at end of some days. Mounted with Hagan ZR bindings, driven by Dynafit EVO boots. My previous backcountry powder setup was the Dynafit Manaslu (92mm waist in my 169cm length), mounted with Dynafit Vertical ST and then Plum Guide bindings, driven by the Dynafit DyNA and TLT5 Performance boots.

First, the first impressions out of the box: When I first saw the specs, something about that shovel convinced me that it could float above and/or plow through much more than would be expected from its 87mm waist, and that the relatively narrow tail would be immune to hooking up.
Up close, although graphics can be deceiving, the physical reality further reinforced the spec impressions. (And hence the name, with the “Y” indicating a pronounced pintail shape, and the bracketed “wai” to encourage Euros to pronounce the letter the same way that we do. For the 2014-15 season, the Y-Flow is joined by three other Y models, one skinner, two fatter, with the same pronounced pintail, although not to the same extent as the Y-Flow.)

Mounting position is a little further back than what I usually prefer, but makes sense given the significant tip rocker combined with a flat tail. (Note that some very early preproduction samples had the position incorrectly marked because of a graphics layup mistake.)

Mounting is a little on the soft side. I got away without helicoils during the season, although will probably have to resort to them for next season to be on the safe side. (Given that Hagan inserts such a bomber metal mounting plate into its race skis, I don’t understand what it isn’t inserted into all of their models.)

The tip is nicely notched for setting up climbing skins as with race skis.

Second impressions, in use: I love this setup! I felt like I was touring around this season with only a set of highly maneuverable wide rockered shovels driven by a pair of carbon fiber upper cuffs on my ski boots. Everything else was just along for the ride at a nearly negligible weight penalty.

Conditions included lots of untrack powder, plus some cut-up powder, skier-packed powder, mank, crust, groomers, and moguls. The broad rockered shovel either floated over or plowed through everything. I never took them out in firm conditions, not out of any lack of confidence, but only because I had other skis for that. However, returning through the resort a couple times on some low-angle groomers, the ski went into a true carve very nicely in response to only moderate angulation.

The narrow tail released very predictably in heavier conditions, without hooking up at all. However, it can jet out from underneath if your fore-aft balance isn’t good. I first experienced this when skiing defensively in the back seat on a very steep slope with about a foot of fresh over a base of just a couple inches of older firmer snow that was barely covering various active land mines. As the pitch moderated, and as my confidence improved on subsequent laps (whether wisely or otherwise!) the effect went away.

The other time was when I was returning back through the resort after over 9,000’ of skinning and for some reason (which I still don’t understand) I sought out a steep tight mogul field. Whenever the moguls threw me into the back seat more than my fried thighs could resist, the jetting effect was noticeable – almost kind of fun in a way, since I never fell, but if you’re not well balanced, this might happen too often. (A certain blogger who quietly panned this ski is always shown passively noodling in the backset, so his dislike makes sense.)

For 2014-15 this effect might be mitigated by a stiffer tail, though the narrow dimensions will stay the same. And I expect that even with a stiffer tail, the ski will still be incredibly quick in tight confines. I had originally been a little wary of moving up 4cm in length from my previous setup for this kind of skiing. But my wariness was misplaced: in additional to being highly maneuverable in unconsolidated snow, I was able to pop off quick turns on consolidated snow in an aptly named “Chute” lead-in to a backcountry ski trail where previously I had often engaged in various forms of survival skiing.

Third impressions, for long-term durability: No problems so far, although haven’t been subject to any abuse yet.
Comment on this review: