The new X-Race skins from La Sportiva feature an exclusive speed weave and factory wax that is designed for high-level competitions. The 100% mohair skins have simple bungee tip attachments that are fast to apply and peel. Designed for the RSR and Syborg skis, the skins are parallel cut so will fit any race ski. The X-Races feature Kohla’s 4-layer laminate construction that keeps water off the glue and hair attached to the skins. And with La Sportiva’s signature color and logo, the new skins not only are fast but look fast.

Overall: Four Stars for a race skin with typical (in a good way) race-style tip attachment system, the usual plush, and strong glue. Laminate is a bit on the stiffer and thicker end of the spectrum, which allows for clean rips (despite the strong glue), although adds a few fractional ounces per foot. As for the missing star: on my pair the tip attachments did *not* come preattached, which seems to undermine the purpose of buying a complete skin rather than separate roll length + attachments. Furthermore, the supplied rivets didn’t work out well for me. Still easy to set up with a Speedy Stitcher Sewing Awl, but if you’re challenged by anything mechanical or just want skins that already set up to go, then look elsewhere.

Background on product familiarity: I’ve used a pair of the 2015-16 skins for four training outings to break them in, so a little over 23,000’ vertical so far. For comparison, I’ve also used a dozen or so other pairs of mohair race skins, including Atomic, CAMP, Dynafit, and Trab, plus assorted black skins of uncertain lineage.

First, the first impressions out of the box: Fairly generic overall for a race skin. Dimensions are stated at 60mm, which I like for our usual relatively mellow race course skintracks out East. A lot of extra length is included, so I’ve started out at nearly full length on a 160cm ski, and will cut them back significantly once I inevitably trash the glue on the tails. Glue was insanely tacky on the first outing, even complicating handling at transitions. Tip attachments (once sewn or riveted on) allow for easy length adjustment.

Second impressions, in use: Nice clean rips. Glue tack diminished noticeably after the first couple outings, although that meant it went from overly tacky to just plain strong. Glide seems typical. Grip is typical or perhaps is even more so, but always so hard to judge, especially across varying snow conditions and terrain.

Third impressions, for long-term durability: All race skins are essentially disposable. But the tip hardware seems strong, and the thicker laminate will help prevent the wrong kind of rips. 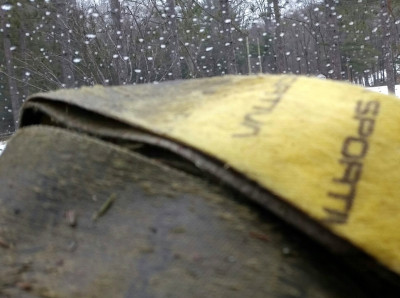 These skins have taken a lot of vertical and a lot of abuse this season.
Example in the attached picture: the skin at the top is close to the original color (portion near the tip that doesn't rub against the snow), and the skin below that is after a short training outing (at a ski resort closed for the day, on account of the rain that you can see up above on my car windshield).
After another training session in more normal snow, the skin was more or less clean again.
I've had to quickly restore the glue tack a few times using release/parchment paper, iron, and rolling pin.
But I have not had to add any additional new glue.
So definitely a workhorse skin!
Comment on this review:

Hello
When will these skins be back in stock? Will you be having a cyber sale over Thanksgiving? Thank you
Answer from Trace Leches
Hey Nicole, we just got our inventory caught up and there is one available, get it quick! We don't have any plans for a cyber sale, though we may do something in our storefront which will likely maintain normal hours and be closed Thursday.
Answer this question:

Hi, what's the width of these skins?
Answer from jbo
Hi Rob, these are 60mm wide.
Answer this question:

What do you recommend for a replacement skin? I like the rubber tip attachment.
Answer from jbo
Hi Gordon, best bet is to buy a Dynafit speedskin for a bigger ski (Cho or wider), cut off the tails and trim. You can add a Pomoca tail clip or similar if you want tail attachments.
Answer this question: