Truth be told, it wasn’t until my late teens that I discovered the joys of telemark skiing. While slogging up a hill in snowshoes for early season turns one November, my friends happily skinned past me. They had been encouraging me to free the heel for a while and this was the final straw. That afternoon I went into Steamboat Springs, where I was living at the time, and bought a tele set up. Ever since then, it’s been my downhill turn of choice.

My father, upon hearing the news of my recent conversion, began telling me stories of skinning up Vail to lap the open, untracked powder runs in true tele skiing fashion. Back then, telemark skiing was the most efficient way to explore out of bounds. In fact, it’s what really started the backcountry skiing revolution in the ’70s. Free heels and a pair of skins enabled passionate skiers to enjoy the backcountry, so long as they had the patience and persistence to learn tele turns.

Since that golden era of backcountry exploration, alpine touring (AT) gear has been continually refined to be lighter and better performing. This has opened up the mountains to an ever-expanding number of outdoor enthusiasts. As a result, the backcountry has also become more crowded. So much so, that it’s now hard to find a parking spot at trailheads in the Wasatch.

I’d always thought that building enough strength and stamina would allow me to travel in the mountains without any compromises. Any incompetence in the mountains was a reflection of me, not my gear. However, when truly assessing the situation, it has become painfully clear that “modern” tele gear, specifically the boots, is far from cutting edge. Their excess weight and inefficient “walk” mode resembles a decades-old AT boot.

So, last year - my 10th season of enjoying the tele turn - it was time. I finally decided to, what felt like, sell my soul for a pair of Dynafit boots and tech bindings. With my eyes on bigger objectives and higher consequences, I locked my oh-so-free heels down.

Even still, I had a difficult time grabbing my new AT gear in lieu of my tele setup. Flat-foot skiing just didn’t make for the same effortless face shots. I was discouraged and the thought of enjoying fresh snow in a new fashion was a difficult transition mentally. Physically though, it was a game changer.

The more I took my AT gear out, the more I realized how much tele gear had held me back on those big days. Before, I was often exhausted by the weight of my laborious telemark equipment and would feel less motivated to tackle more intimidating lines. Now I found myself enjoying every part of the day - not just the down. I was more energetic, enthusiastic, and inspired than ever. Whenever the snowpack was stable, I set my sights on larger and longer days with my AT set up. I even began dreaming of rowdy lines involving ropes, crampons, and ice tools. Come spring, I could not remember the last time I dropped a knee.

One season later and most of my backcountry days are on an AT setup. But despite tele’s clear disadvantages, I just can’t fully shake my addiction to knee dropping. When the snow gods bless the Wasatch with a bottomless powder day, I'm always tempted to head out with my oft neglected Voile Vectors, Kreuzspitze bindings, and Scarpa TX Pros.

As a result, I have started to think of my AT gear as my new tools of the trade - something necessary for ski mountaineering - while my tele equipment has become more of a toy utilized only when the terrain is easily accessible and the tour stays below 5K feet of elevation gain. If my big objective gets snuffed out by a big storm, I'm all smiles because I know what is to come - pure bliss

Perhaps the lesson for my fellow tele skiers is that you don’t have to decide one or the other. You can do both.

If you haven’t already, you owe it to yourself to try out a proper AT setup - comfy, light boots paired with a mid 90mm waisted ski and a modern AT binding. It’s possible you’ll become a skimo nerd, but more likely, you will be able to keep up on the hike and still have a blast on the descent. Having another set up will allow you to pick the correct tools for the adventure and will elevate your enjoyment in the mountains. Besides, all those years of slogging heavy gear has surely conditioned you to peak fitness. Finally, you’ll be the one waiting for your partners at the top.

Even after all that, there’s still a part of me that feels guilty for not dropping my knee on every turn, as if days with my AT setup is cheating or turning my back on tradition. But then I think about how my dad probably would’ve killed for a lightweight AT setup back in the day. Just imagine how many more laps he could’ve done each season!

No one cares that you don't tele.
Reply to this comment:

Post Reply
Yep, my experiences exactly. I have started AT about 5 seasons ago, my first soirée into the alpine world (been telemarking since 3 years old!). It is so light compared to my telemarking, including medejio and Tts binding systems, because of the boots. Modern Telemark boots are awesomely stiff and great for resorts, but telemarking is best in the backcountry. The truth is, I can’t keep up with my friends on modern AT gear using my telemark gear, but I can on modern AT gear. So, now I AT in the backcountry, and telemark in the resort. The biggest problem with this is, when do I get to snowboard? I used to snowboard at the resort and telemark in the backcountry. So, I finally found a pair of 10-year-old f1’s just this season, put on some Micheal bolt-on duck butts. Nice and light, but stupid soft and not very comfortable. I feel it is like telemarking on old leathers- I can’t ski the gnar with them. When, oh when will the telemark industry break out of 2000’s technology and utilize the light and stiff boots that the AT community has had for a decade now? The industry says telemarking is dead? It is because the industry killed it.
Reply to this comment:

I just get stuck on the amount of emphasis people place on weight. Feels like it gets crammed down our collective throat no matter where we look.

I have an old, heavy-by-modern-standards tele setup.

And a light AT setup.

Weight is never, ever something I notice between any of them.

But I definitely notice dynafiddling, and having heels locked down will just never, ever feel natural to me.

As I said at the start, to each their own.
Reply to this comment:

Post Reply
Ive been hiking and skiing my 3 pin set up for more than 35 years. I dont tele, parallel turn only. I like the way it walks, on the ball of the foot for uphill. Dont wanna give it up, although it would be nice to drop some weight. Also the un hindered arc of the single binding point created a true arc under foot that cannot be replicated on a fixed hill ski setup. Its all about what flavor you chose and how hard you wanna charge. Still love ripping turns on the hill with an alpine set up as well.
Reply to this comment:

Post Reply
I feel like I wrote this article, with the exception of slogging my heavy tele setup up volcanoes for 20+ years. Bought a dynafit boot/Ion/Helio 95 setup from Skimo 4 years ago, and super glad I did. That first year started tackling longer trips, more back to back trips, and just had more fun overall, as I wasn't exhausted. Best thing I've done for myself in my early 50's. Since it's typically one run down when backcountry skiing, don't miss tele. Also don't miss tele, because it's all I do when lift skiing, so I still get millions more tele turns per year than alpine!
Reply to this comment:

Post Reply
What a great article! I share the author’s tele/AT conversion history and this describes my feelings perfectly. Thanks for putting it into the written word! For me, the question why anyone would want to tele in this day and age is kind of like the question why anyone would want to dance ballet. Because it’s beautiful. But yeah, that light gear is nice and opens up a whole new world of backcountry terrain. Definitely need both.
Reply to this comment: 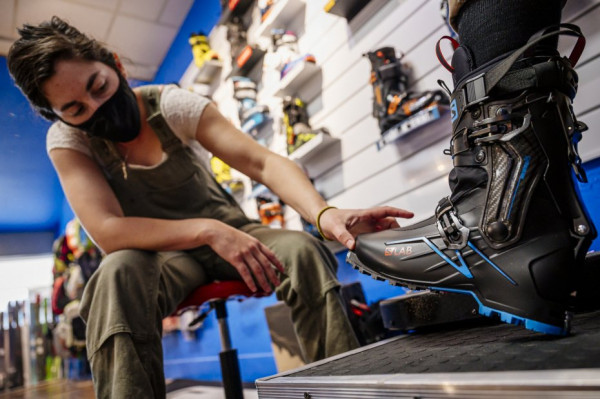 Bootfitting for the Backcountry 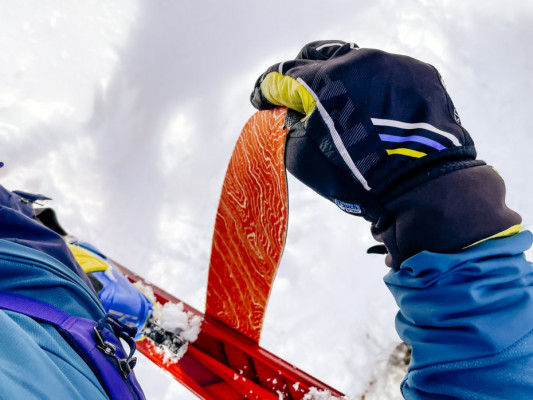 Gloves for the Backcountry