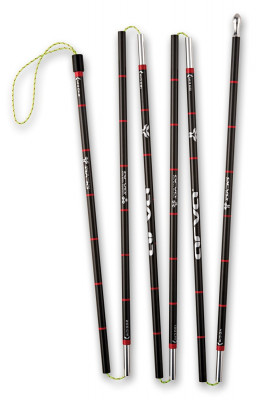 The ARVA Carbon 240 Light is the lightest probe on the market that complies with International Ski Mountaineering Federation regulations, weighing in at a scant 115 grams (4.1 ounces). However, being a full 240 centimeters (7 feet, 10.5 inches) in length, it is also long enough to carry on tours with people you actually care about finding under the snow.

Does the cord come pre-knotted? If not (hah), then any recommendations in getting a knot tied in there tightly enough to hold the probe together?
Answer from jbo
Everyone likes a good pun! There is a knot, and it's deep. Pull with confidence and it will appear.
Answer this question:

Like the Crest Shovel, it has and always will stay in my race pack and never be used for actual probing. It is as light as it gets for a probe which is the only thing you care about for a skimo race. IF you think you might need to probe for someone, bring a real probe. Actually though, this might work in a pinch. The cord is flimsy and its only 2.4m but it would work.
Comment on this review:

Overall: Five Stars for sitting nearly weightlessly in your pack to meet IMSF race regs (Section 9, Appendix 2). But as an avalanche safety instructor for AIARE and NSP (as well as an American Avalanche Associate governing board member), I feel compelled to subtract a star for backcountry companion avalanche rescue as assembly is potentially less easy than for more mainstream models, so Four Stars overall.

Background on product familiarity: I bought the ARVA Carbon 240 Light probe during the 2013 ski season, but mainly it just sits in my pack.

First, the first impressions out of the box: Despite the impressively light weight, the 240cm length is sufficient for backcountry companion rescue (of any burial depth at which you have a chance of fast extrication). The ferrules (or whatever the proper term may be for the portions of the sections that overlap) are long and metal, which helps with a nice firm connection when assembled.

However, assembly entails pulling the knot on the somewhat stretchy connector cord up and over a slot on the end of final section. If you have the arm strength, this is almost as fast as the various mechanisms on more mainstream probes. But if you’re struggling for sufficient grip in snowy conditions and/or bulky gloves (or especially mittens), and you are also not very strong, then assembly could be a nightmare in a panicked rescue. You can adjust the tension beforehand simply by changing the position of the knot along the cord, but set the position too easy to assemble and then the probe will be too flexible. Overall, still acceptable, just not as easy as more mainstream models.

Second impressions, in use: The deflection of the assembled probe is relatively minimal, and the tip is nicely designed to penetrate firm layers. However, when stowed, the additional knot that forms a grab loop at the end can slip through all the segments, requiring a potential nightmare rethreading in a panicked rescue. Fortunately, this is easy to prevent by just adding an essentially weightless minimal split ring (or really just any random plastic doodad, like on the similar CAMP model) to the cord loop. Alternatively, you could bulk up the knot, but be careful that you still have a sufficiently large grab loop and enough extra cord to allow for disassembly.

Third impressions, for long-term durability: In my avalanche safety courses, by far the most frequent gear failures are probes. The cord on this probe will probably fray eventually, especially with having to pull the knot up and over the slot on the end. However, if you reserve this probe exclusively for avalanche rescue (and the occasional practice assembly to refresh your memory of how it works), then it should be fine.
Comment on this review: