Watch your waistline! It’s starting to creep up with the 108, which of course means you enjoy eating a lot of powder. Probably for breakfast, lunch and dinner. Maybe even fourth meal. If you can’t get enough of the soft stuff, and want a ski to point right down it, check out the Zero G 108. Blizzard used the same impressive Carbon Drive construction as the other Zero Gs, but pushed out the dimensions for your floating pleasure. And just in case you have to cross some *gasp* hard snow on the day, the sandwich construction with a full ABS sidewall will hold an edge. This is a ski you could safely ski at a resort, but somehow is light enough for off-the-map adventures. Take the backcountry skiing to the next level with the Zero G 108.

Update 2018/19: Blizzard updated the graphics but the ski remains the same.

I've got a buddy who currently has these. He's skiing them with the Backland Carbon boots (the one's with the tongues!!, purchased from you guys). He's been looking for something with a more forgiving flex and shorter radius, but still around that 100mm waist (maybe up to 108mm although that seems on the fatter side of what's required). What would you guys recommend from your line up?

Cheers,
Tom.
Answer from TSB
Hey Tom, thanks for reaching out! What your buddy is looking for sounds an awful lot like the Zero G 105, which is still not the most forgiving or short-radius ski in the world, but it's a lot more nimble and less of an elephant gun than the old Zero G 108. If your buddy likes the brawny, speed-loving vibe of the Blizzard touring skis, he could go in that direction. My other top pick for him would be the Voile Hyper Charger, which has more rocker than the ZG 105 and has easier handling in variable conditions.
Answer this question: 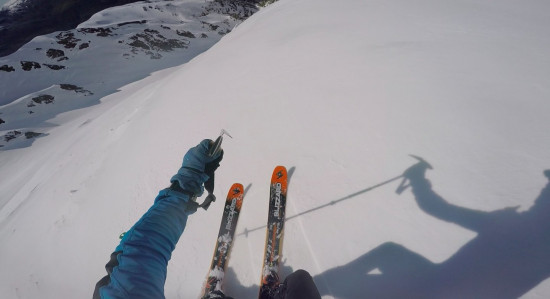 As Matt said, these skis love speed...but you can still control them in tight spaces. I'd say the best description of this ski is that it likes to be ridden with an energetic style, and it feels a bit dead underfoot until you start speeding up or putting some pressure through the ski into the snow.

Despite the width, they have become a daily driver for me - they excel in the soft stuff, but are still very capable on firm snow thanks to the relatively minimal sidecut. The flex pattern feels just right, especially in comparison to the other ZeroG offerings, which can feel super stiff at times.

Grab a pair of these if you want a versatile, high-performance (read: fast) ski that is not too heavy to take on big days.
Comment on this review:

These things rip. Not the lightest in the world, but that doesn't matter when you're nuking around at mach chicken, jumping off things in a pair of skis that was still light enough to drag up however much vertical it took to get there. These, mounted with IONs have been my daily driver in Rogers Pass for a year now and I see no reason to trade them for anything else. Weight is fine for what they are, durability seems good, they charge harder than any other ski this light I've tried, they don't chatter on hardpack as much as other carbon skis and they float better in the deep stuff than the waist width would suggest.

They do like to be driven from the front of the boot and will punish laziness, but in a ski I rarely take on more than a 2000m day I consider this a fun virtue rather than a downside. They also feel a little dead at low, meadow skipping speeds, but again, I think that's fun because I'd rather ski fast anyway. YMMV
Comment on this review: