The dreaded glop. Sometimes it’s a slow onset of sluggishness while other times your skinning speed comes to a screeching halt. Eventually, the question of “Why have my skins lost all of their glide?” is followed by the stomach-dropping moment of panic when you lift your skis to inspect. Underneath is a massive wad of snow that looks like Frosty the Snowman clinging to your bases like a sloth in a tree. No wonder your hip flexors were beginning to ache!

To make matters worse, once glopping starts on a tour, you’re usually just doing damage control to get through the day.

Obviously, glopping is the antithesis of Skimo Co’s light ‘n’ fast motto. It is pure dead weight that decreases efficiency (and fun). While we could go on and on about how annoying it is, we’re going to instead focus on helping fellow skiers escape the wrath of these burdensome piles of hitchhiking snow.

Scientifically speaking, glop is the unfortunate result of wet skins meeting cold, dry snow. As the plush on wet skins freeze, they attract snow. And more snow. And then even more snow... until it is plastered inches thick.

Glopping is most common in the spring when snow conditions change drastically with elevation, aspect, and above-freezing temperature swings.

Here’s how it usually goes down: you start at a low-elevation, south-facing trailhead that features damp snow, and then, after a bit of climbing, you turn the corner onto a sheltered, north-facing slope hunting for soft snow. BAM! Glop attacks.

Or you’re touring in fresh, cold snow on a bluebird spring morning. The sun is out and quickly warming up the snow, causing it to get heavy. So you bail to a shadier aspect and, well, you can guess what happens next.

So what can be done to avoid this?

First and foremost, keep in mind how glopping works and see if you can mitigate it via navigation. If your plan is to ski cold powder, then stick to cold snow on the way up via trees or shaded aspects. It’s also critical to fully dry out your skins after each tour. Leaving them in your car overnight has disaster written all over it.

Since avoiding glop-portunities isn’t always possible or safe, the best move is to preemptively wax your skins beforehand. Most skins come with a factory treatment but those wear off after a season or so. Once it’s gone, it’s up to you to maintain the plush. Choose from bar wax or spray-on liquid wax. Both will get the job done with spray being slightly easier but bar wax providing increased glide, not just waterproofing.

While there are dedicated bars of skin wax, you can also just use the wax you’re applying to your ski base. Match the wax to the day’s snow temperatures like you normally would. Regardless of which wax you use, it’s important to crayon it on firmly in both directions. Really get it in there! And don’t worry, wax won’t affect the skin grip at all.

For increased longevity after applying bar wax, warm up an iron and quickly run it down the skins with the plush - tip to tail. Again, just warm, not hot. You want to be careful not to damage your skins by burning or melting them. After the single swipe, the chalky white wax should turn clear and really get down into the hairs of the skin.

Even the most vigilant of skin waxers get burned every once in a while, so it’s important to know how to fix glop in the field. First, it’s imperative to have a scraper and a chunk of bar wax in your pack at all times, just in case. We like Pomoca's Bi Color Wax because it's small, portable, and offers two types in one block. Once you start to feel the glop, try to address it immediately. Use the scraper to remove not just the snow, but also any wetness in the plush - kind of like squeegeeing a window. Scrape hard, especially if it's icy! Afterwards, rub on the wax in both directions and especially in spots where the glopping was occurring - usually directly underfoot.

A close cousin of skin glopping is topsheet glop. Folks in the ski industry argue as to what causes snow to stick on top. Is it because the top sheet is warm from the sun or is it due to the texture of the topsheet? It all depends on who you ask but no matter the cause, there are two solutions. One is using kitchen grease, such as PAM or butter, but we highly discourage this one unless greasy gloves and slippery skis don’t bother you. The other is a dedicated top sheet spray such as MountainFLOW Anti-Stick Spray. This has been proven to work and doesn’t leave your whole setup smelling like Paula Dean’s cooking.

We don’t wish glopping on anyone, even our biggest enemies. But if it happens, use that extra touring heft as a reminder to be grateful for how lightweight gear is these days. And if you’ve never toured with frame bindings or old tele gear, well, here’s a little perspective for what the older generation was using while pioneering new ski descents! 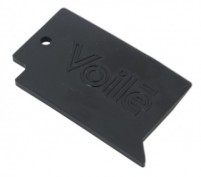 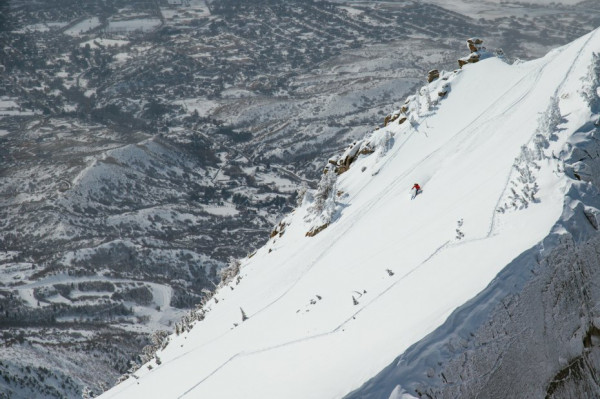 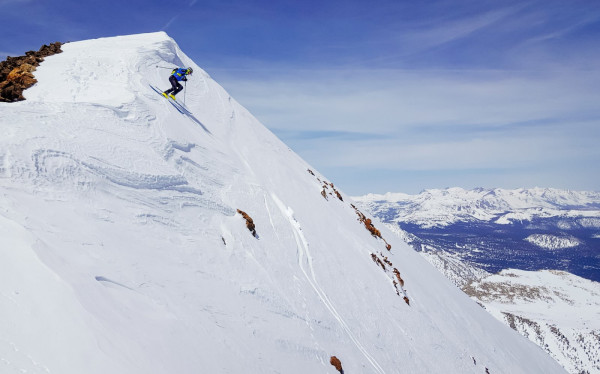