The 106 is not just a different width for the Wailer. It also features an updated tip shape and profile designed to eliminate worry about your tip shape and profile. If you prefer to just ski and not think about your skis and how to turn them, check out the 106. It’s an easy-skiing ski with a smooth flex and a weight that won’t give your legs a hangover. The Wailer 106 Tour1 is a backcountry quiver of one.

Wow! I'm really happy I finally tried dps, in particular this Wailer. Might not be for everybody, but they are perfect for my style - low speed putting around through powder in trees and on steeps. I prefer others on resort of course, but these work better on a groomed piste than expected - you still get the touring ski chatter, but not bad and at a slower rate.
They seem to turn very smoothly for turns of many shapes. They carve well, but a little slow from edge to edge, which is expected for their shape and width. Powder turns are perfect, and floaty, easy to stay centered fore and aft with those big tails. Hop turns on steeps at low speeds worked well for me, with their low swing weight. Big GS style carvers on piste are great, if speed is moderate.
Lots of traction skinning the uptrack with the mild rocker, allowing the ski to lay flat. That mild rocker did lead to me burying a tip once though - that is the only bad experience I've had with these. With a little more vigilance, I should be able to avoid that. These Wailers are much lighter and nimble feeling that my Black Crows of similar dimensions. Kinda wish I'd had a pair of these a long time ago! Now it looks like they are being discontinued, so better jump on it!
Comment on this review: 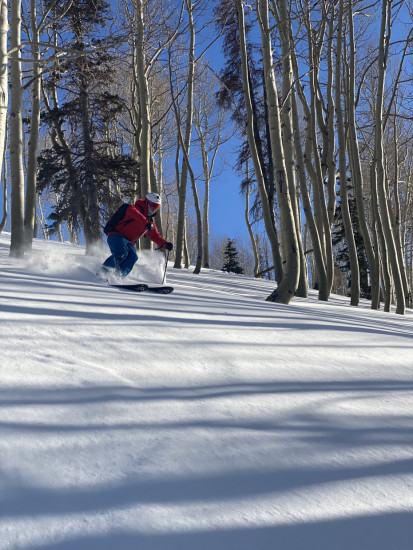 These skis are great for places like Utah where you tend to ski lighter, soft snow. The uphill is an absolute dream and they are so light, your skis actually keep up with people that are probably in better shape which for me is amazing. Underfoot and in the tails you can certainly drive this ski and I like the playfulness in the tip. For ex racers I would say the tip probably will leave a bit to be desired but if you are like me and just wanna get out and make nice wiggles down good snow this is an amazing tool.
Comment on this review:

I have to re-mount my bindings due the shorter BSL of the Scarpa F1 boots I bought in your shop this fall (which I love). Do you recommend mounting boot center on the line or going -1 or -2? Due to hole conflicts I need to either mount at -1.5 or on the line? I did ski at -1 and felt that was maybe a touch forward---? Thanks for any insights!
Answer from Julieana
Hey Carl, if you have the ability to mount on the factory recommended line that's definitely the way to go!
Answer this question:

How does this ski compare to the Wayback 106, Helio 105 Voile V6 & Hypercharger? Particularly in terms of float, surfyness, pop and general stability. Any feedback would be greatly appreciated.
Answer from TSB
Hey Eric, thanks for reaching out! You've got a great lineup of skis to choose from there :-) Each of those skis has a particular "sweet spot" in terms of ski touring usage, and will have certain places where it particularly excels. For instance, the Wailer 106 and original (non-Hyper) V6 are on the softer side of the touring spectrum and both have a wonderful, easy-skiing, soft-snow-loving personality -- both have big "sweet spots" for the skier who is turning them (front seat and back seat skiers both). The Hyper Charger and Wayback 106 have a bit more "pop" and tend to accelerate out of turns a bit more, making them better served for skiers looking for a "quiver of one" that goes well on hard snow as well as soft. Meanwhile, the Helio 105 is quite a different ski from any of the previous 4 -- more powerfully built with a full sidewall, longer turn radius and considerably less rocker. Hope that helps; feel free to reach out with more questions!
Answer this question:

The 106 Wailer has been an interesting ski for me, not quite the "one ski to rule them all" that Drake and Co. might have you believe, but a soft snow charger built for fun and surfy turning. Background for me is that these were my first tech-mounted skis >100mm underfoot, though I spent many years on tele boards of that size or greater (Voile Charger, BD Warrant, various G3 models). It's been an adjustment process, and I'm still not convinced that the size is really needed for speed-oriented randonneurs looking to ski in the "classic" style (both in terms of turning and in terms of route/line selection).

I chose the 106's after borrowing a buddy's 99's and also demo'ing the 112's, feeling that the moderated tip/tail rocker would suit hardpack use a bit more, and that the 99's were too sidecutty for my liking. The ski immediately fit the bill for deep days but also for unconsolidated/mixed conditions of any kind, from overcooked corn to chunder. What surprised me most was the flex. Relative to the 99's I felt that the ski had a hard time moving into the front seat and engaging the full ski through a turn, as the tips preferred to pull out of the arc and "rocker" through to the finish. Similarly, defensive backseat skiing required more strength/heft than with the other Wailers I had skied, which allowed me to get a lot of power and control out of sloppy, out of control skiing. None of this is a bad thing, but it did take a half dozen days to get use to the unconventional flex pattern, coupled with the rocker and sidecut.

All told, skiing soft snow on these is just plain fun -- whether you're dealing with a 2 inch or 2 foot storm, dry or wet, bridged or unbridged. Where the Wailer 106's got a bit funky on me was on steeper, firmer snow. I couldn't shake the feeling that the ski was "squirming" or 'wiggling" a bit when I tried to edge into a slower turn, or hop the skis around. This was especially pronounced in windbuff situations where I had trouble checking my speed coming out of powdery pockets and onto buffed sections. For sure, this is the reaction of someone who usually skis 75-85mm skis in such conditions, but it's also a weakness of a more powder-oriented platform.

All told, this is a great ski for rallying soft snow with speed and confidence, but I'll stick with my Euro widths for 80 percent of the skiing I do. I also want to experiment with some other boot/binding combos. This past winter I was running Plum Guides, which have a higher ramp angle than most tech bindings (that compensated for some of the rocker throw), but some low-ramp Plum 170s might be a fair swap. I skied the Wailers with Alien RS as well as the Sportiva Spitfires -- the Spitfires are stiffer and thus more versatile, but the RS was plenty of boot for deep days.

Note, I got these as a factory 2nd from a local shop, though I can't imagine that affects the performance to any noticeable degree.
Comment on this review:

I'm currently skiing the voile vector but am looking for a slightly wider ski. How would this pair up with the Dynafit super light bindings and the Scarpa maestrale? I tour 90% of the time, ride the lifts 10%.
Answer from Nate
Hi Joseph, the setup you've suggested sounds killer! We have worked with a number of customers who have chosen that binding and ski combination and they have been very happy.
Answer this question:

Are you going to carry the DPS 106 Tour 1 in 185cm? Thanks
Answer from jbo
Hi Erik, yes we have that size coming in fall, though we likely could get a pair now (DPS is nearby).
Answer this question:

Per chance have you weighed it?
Answer from jbo
Hi Kelly, of course! When you see "Specs Verified - Yes" in the Specs section, that means the weight is an average of all the pairs we've received.
Answer this question: