A new version of the X-Race builds on Hagan's well-known and impressive combination of price, weight, durability, and performance. Slightly wider and longer, the X-Race now has a gentle rocker to help navigate the full range of conditions from fluff to crust. Also included is a redesigned elliptical shovel for improved lift and flotation so you won't be as hesitant to lap powder fields with your skinny skis. All this with scarcely a change to its race weight and not-very-race-like price. We think the new version is even more impressive and will become ever better-known.

Update 2015/16: Hagan updated the colors on the Professional series skis, otherwise they remain the same.

Wanted to wait until I'd used these quite a bit to write something. I've had them for about a year and have put at least 100k vert on them with trab binding and Syborgs. I'm 6'2, 170. Between racing, training and fast days in/around mt washington last spring, I've skied them now in a wide array of scenarios - carving groomers very fast, a foot of powder on some steep lines, icy and soft bumps, corn, a frozen over tuckerman's ravine - and honestly the only time I wished I was on a different ski was in very wet slush and breakable crust. But I still had fun skiing them. After drilling some covertly hidden rocks last spring, and aggressively skiing some grassy moguls last weekend in a race - the top sheets and bases are a little beat up. But I think that would be the case with any light ski. My non-skimo friends find it hard to believe, but I love skiing the light skis. With the light boots they're a ton of fun, and being able to move fast and do more laps is highly addictive.
Comment on this review:

I am doing the elk mountain traverse event in march. I have a question about ski trap aero world cup. I was thinking of going with the 171 cm fro the purpose of also using it for fast touring outside of the racing world. Mt thought is that the slightly longer ski might be more versatile for touring as well as racing. Or should I stick with the stiff version at 163cm. How much will the 171cm slow me down for this longer race event. not a very direct question but maybe you have an answer.
thanks jon
Answer from jbo
Hi Jon, that length wouldn't slow you down much in a traverse. Longer skis are slightly less optimal for doing switchbacks, but there aren't too many steeps in half-Nordic races. Optimizing for your skiing pleasure is not a bad idea.
Answer this question:

last year haagen ski the same as this year?
Answer from jbo
Hi Jon, the ski is unchanged for 2015/16 except for the color.
Answer this question:

I raced on these skis all last season and did some spring skiing as well.
It took some getting used to at first in moguls and icy conditions where I felt I had to hop the skis around the bumps instead of carving. I attribute this primarily to my very light weight as a skier and the skis being reasonably stiff. I have since become much more comfortable on them and now don't hesitate to trust them.

The rocker is great, these skis really shine in powder and manky conditions, performing much more reliably than a pair of Movement Random skis I previously owned.

Skis are a little stiff for my weight, but not too much so. I have mad minimal durability issues. One coreshot at a race in New Mexico, and a bit of topsheet damage. Nothing significant.

The weight is just fantastic, no issues on the uphill. I wouldn't hesitate to buy these again.
Comment on this review:

Overall: A full Five Stars for a highly competitive race ski with additional versatility for “real” backcountry skiing. Check out the Hagan Ascent if you want the same design but with a different wood core to save some $ at the penalty of a few trivial ounces. However, both of these models are still full-on race skis – for a more all-around yet still very light ski, within the Hagan line-up check out the Cirrus.

Background on product familiarity: I used the 2013-14 version for just over 90,000 feet of earned vertical, plus a couple afternoons of post-race lift-served skiing, in just about every possible condition, mounted with Hagan ZR bindings, driven by the Scarpa Alien 1.0 boot. Previously used race skis have been the Atomic TM:11, Atomic MX:20, Movement Fish-X (still used for most training), and the traditionally shaped version of the X-Race from the two prior seasons (still preferred a little bit for carving on groomers).

First, the first impressions out of the box: The weight – or rather, lack thereof – is amazing, but you’re probably already used to that by now, or at least expecting that from a full-on skimo model. The tip rocker though is new for race skis. Hagan wasn’t the first to try it, but Hagan was the first to sell a rockered race ski in North America, and Hagan also seems to have dialed it in just right. Compared to the version over the two prior seasons, Hagan increased the overall ski length by 3cm (i.e., from 160cm to 163cm for men, and 150cm to 153cm for women), yet kept the mounting position at the same distance from the tail, so all the additional length was essentially added up front. And somehow despite the additional length (plus another mm in the waist and two more in the tail), the spec weight stayed pretty much the same, with plenty of pairs coming in under that.

Note that you can’t deviate from the suggested mounting position, because the toe area’s internal mounting plate is just barely long enough for the drill pattern. (The heel plate though is long enough to accommodate any extremes of boot sole length.) And that mounting plate is impressive: between the current version and the version over the two prior seasons, I have mounted six pairs of Hagan race skis, and the amount of metal that flies up during drilling into such a light ski never ceases to amaze me. You will probably break all sorts of gear and body parts before you ever rip a binding out of a Hagan race ski.

Second impressions, in use: My first couple turns felt odd, since the mounting position was effectively shifted back relative to the prior version. But since I was on such a short light ski with a turny radius, that oddness immediately disappeared. I still find that older version a bit more fun for true carving on perfectly smooth groomers (which of course is entirely irrelevant for competitive purposes), given the way an entirely non-rocked tip engages more definitively.

Otherwise though, the current version has expanded the versatility of a race ski to a level that I never thought was possible – after two races, I just kept using them for some lift-serving skiing, not bothering to get more “normal” skis from my car, one day on all sorts of ungroomed funky natural snow, plus another day in tight moguls. And an Eastern rando buddy who often races and trains in Colorado finds the new version great for powder.

In the backcountry, I’ve skied pretty much everything on them, even including some surprise powder on a short hill. In the spring, I still mainly use the Cirrus, but then as the snow becomes more consolidated and/or the dry approaches (and exits) even longer, I switch over to the X-Race, especially for summer snow. The only time the X-Race ever started to feel skitterish was in a couloir somewhere in the 40s for pitch, with a few inches of fresh gloppy snow on top of old somewhat soft ice, where I was definitely reminded of the drawbacks of having only one-a-half pounds of ski on each foot.

Third impressions, for long-term durability: The only problem I’ve had was more of a manufacturing defect, as I noticed a slight “crinkly” (?) effect on one of the sidewalls when new. Eventually this chipped off, although it was easily sealed up with epoxy, and seemed to be only cosmetic. I sent a picture more as an FYI/FWIW to the U.S. distributor, who forwarded it to Austria, where the HQ insisted that I should be issued a pair of replacement skis (formulated in bonus entertaining Germglish). I don’t think this manufacturing defect says anything important about Hagan’s quality, but the replacement sure says a lot about how they support their products.
Reply from Jonathan S 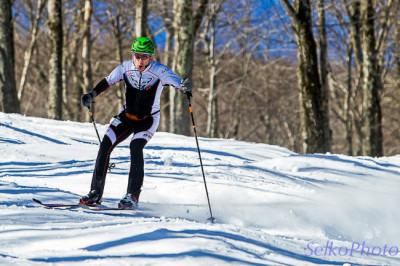 Picture from a backcountry rando race last season (2015, when New England actually had winter snow), on my way to passing a second racer on the long descent to move onto the podium -- so yes, you can really ski on these skis!
Comment on this review:

I have skied these about 20 days now and after initial skepticism due to their soft feel I am continued to be surprised with their performance. I have skied them now in all possible conditions, from powder to crust to icy colouirs to moguls to groomers, and have to say they are performing very well.

I like the rockered tip and my only advice would be to make them slightly stiffer (equally everywhere by about 10-15%) but I am 6' 2" and 74kg so that might not work for lighter people. For skiers above 70kg or very aggressive ones these will ski very well overall but best in softer conditions (or not in breakable crust). For lighter or less aggressive skiers there should not be any problems in any conditions.

I have them paired with the Hagan ZR bindings which brings the combo to 828g when mounted.
Comment on this review: