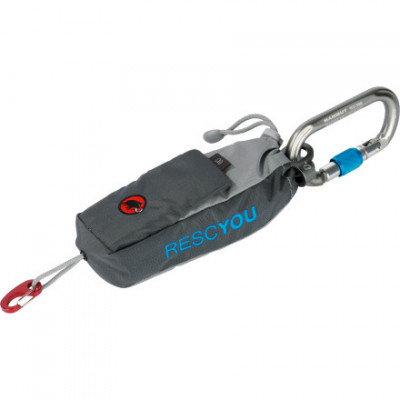 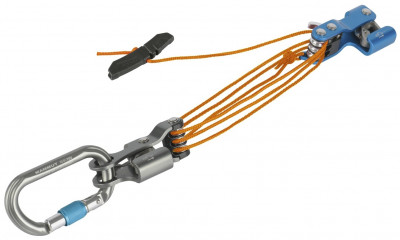 The worst time to try to remember how to rig a pulley system is when you or your buddy is dangling in a bottomless crevasse. The RescYou system from Mammut is a no-brainer, just attach the two rope clamps and start pulley-ing. The all-in-one kit attaches to your harness in a neat case, ready for deployment if you’re struck by misfortune. In such a scenario, just loosen the cinch-top and attach the top and bottom clamps in the direction of the clear symbols. Then, pull the sturdy handle to jug up in a self-rescue, or to lift your partner in a third-party scenario. Reset the clamps higher on the rope and repeat until safety is reached. The 6:1 pulley system dramatically increases your pulling strength. The Mammut RescYou is the simplest and fastest way to perform a crevasse rescue, giving you confidence to ski some fun glaciers.

Hello!
I’m interested to buy this product .Can You tell me pls a price and how I can ordered!
Regards

Answer from Zak M
Hey Cristian, unfortunately, Mammut discontinued the RescYou but if you are looking for a similar set up you could look at the Petzl RAD System Kit or the Petzl Crevasse Rescue Kit but unfortunately we are currently out of stock in it. Feel free to give us a shout if you have any more questions.
Answer this question:

How much weight can it pull?
Answer from Trace Leches
Hey Rich, thanks for reaching out. Do you plan on using for something outside of crevasse rescue? When rigged in the current configuration it has a 6:1 pull ratio, so in theory it's capable of pulling up to 6x whatever your arms will let you pull. The manual doesn't state a working load limit though, so I can't imagine it's strong enough to rig up anything with rope work. It does state that it's intended for emergency use only, which gives you a pretty good idea of what it's designed to handle.
Answer this question:

Five Stars for a one-trick pony: the Mammut RescYou quickly and easily sets up a 6:1 hauling system for crevasse rescue. Since training for crevasse rescue is so often oriented to climbers who can simply use a subset of their large racks for hauling, the RescYou is especially helpful for those skiers who have no need for any climbing-related gear other than for crevasse rescue.
The RescYou thereby marks you as a total climbing gaper right from the trailhead! But some other more serious tips & tricks follow below:

- Far less operator skill is necessary compared to a 6:1 Canadian drop loop or a 2:1 added onto a Z Drag, but still not *entirely* brainless, so definitely practice!

- Weights savings compared to the most minimal gear for the above is only about half a pound. (And replace the original overengineered carry bag with a small cuben fiber stuff sack, as shown in the collage, center top.) But you can save another pound or two by bringing shorter ropes, since the RescYou’s thin cord is essentially substituting for all the extra rope length you would need in a traditional mechanical advantage system for hauling.

- The cord can also kink at first, which I suspect is a problem that lessens from use, just like with a climbing rope, so once again another good reason to practice.

- For stowing away the RescYou, to minimize the potential mess when redeploying a device with so much cord, I’ve settled on shortening up the device all the way, then wrapping the cord around a zillion times.

- The RescYou’s 6:1 should be much closer to a true 6:1 than any minimal setup for a traditional system since that cord probably has much less stretch than a dynamic climbing rope, and the friction is relatively minimal since all the direction reversals have pulleys (as shown in my ability to overcome the resistance of a fierce practice partner in the college).

- For rescue of a partner, creating a “shelf” in the sling (via an overhand knot, as shown in the collage, center bottom) coming off your anchor allows you to initially attach both of RescYou’s rope clamps past the rope’s tie-in knot.

- The newer black plastic grip has ergonomic contours, unlike the simple gray tube shown in the listing. The black grip also allows you to wrap the already-pulled cord around the grip so that you can use the grip without resorting to walking away from the RescYou toward the end of each pull and/or without resorting to pulling on the bare cord.

- For self-rescue, far easier than attempting to climb out with the traditional system of a long and short prussik. A prussik self-rescue is also pretty much impossible anyway if you’re ascending with a small party whose travel rope has butterfly stopper knots, which are easily bypassed with the RescYou.

- The Mammut video shows a fallen skier first unclipping the RescYou biner from a gear loop and onto the belay loop. Seems far more prudent though to keep that biner attached to the belay loop from the start!

- The video also shows that same skier with a traditional prussik attached to the harness, which seems excessive with the RescYou. (Perhaps the idea is that if a partner falls in, and the pictured skier is instead building the anchor, that skier’s prussik could be transferred to the anchor, but the same could be done with a dyneema sling.)

- Keep your tie-in knot very small (especially with a relatively large HMS biner, as shown in the collage, left) if you want to have a chance of initially attaching both of the rope clamps for self-rescue. (The instructions depict tying directly into the rope without a biner.) However, even if the lower rope clamp is up against your tie-in knot, you can initially attached only the upper rope clamp, pull the cord to ascend just a few inches, and then attach the lower rope clamp past the tie-in knot (which will now be on the slack part of the rope).

- Don’t try to be too clever by setting up the RescYou with its rope clamps already attached to the rope! The force of a crevasse fall would then be exerted not on your harness’s attachment to the rope by instead on those little teeth of the rope clamp digging into the rope’s sheath.
Reply from thomc
your assiduous reviews are really informative: thank you. how is it you find the time to do this and your day job and compete? You are a time bender, yes?
Comment on this review: