The mountain which these skis are named after, Le Roc D'Enfer, is a steep and committing peak in the French Alps. Many of the lines off of her summit contain just the conditions that this ski is built for. With a 68.5mm waist that many skimo racers would consider a powder ski, the Roc is a strange hybrid of race ski technology and mountaineering performance. The Le Roc D'Enfer ski and has a Karuba and carbon core that makes it one of the stiffest race-weight skis available, and is the ideal tool when big objectives are on the agenda. These are the skis you'll be grabbing for those spring missions that involve as much time in trail runners or on a bike as they do on snow. Whether you're on a quest to ski an obscenely long ultramarathon course, have in your mind a contrived traverse of techy spring chutes, or are planning a never ending sufferfest to a big peak far from the road, it doesn’t matter. The Le Roc D'Enfer skis from Plum are the tools you want when the vert gets into 5 digits and the daily mileage ticks on over 20 miles. 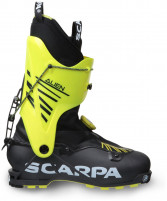 This isn't exactly a question about this ski in particular, but I've been thinking about adding an even lighter ski to my quiver. My lightest ski currently is a Movement Race Pro 71 (775g), but to be perfectly honest I don't want to sacrifice a ton more downhill performance. Any thoughts on what the best downhill performing ski would be that's sub 730 grams or so?
Answer from eric
Jordan- The best race skiing ski is the Aski Stealth ski.
Answer this question: