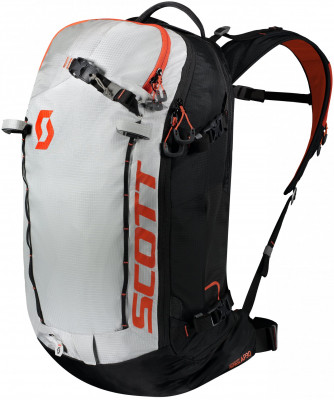 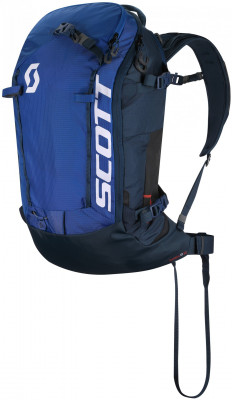 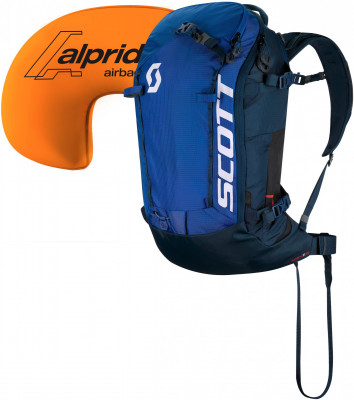 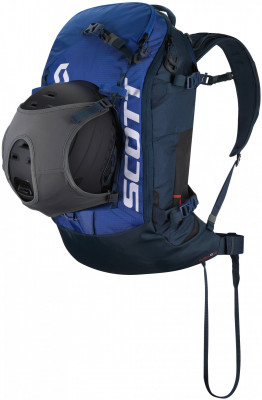 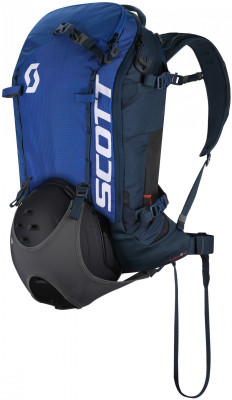 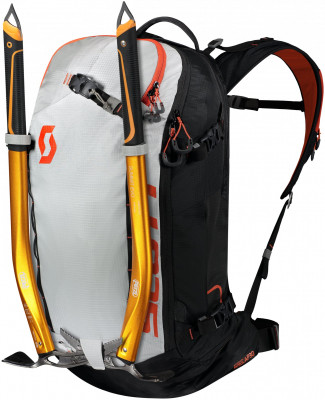 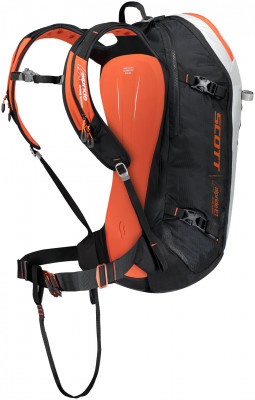 Say goodbye to constantly refilling airbag canisters and the hassles of traveling with them and say "Hello" to the SCOTT Patrol E1 30 Avy Pack! The E1 Alpride Airbag System is the lightest electronic airbag yet and is simple to use, simple to charge, easy to travel with, and extremely reliable. It’s powered by 4 supercapacitors that don’t use a chemical reaction to store energy so they are not sensitive to lower temperatures. This means you can count on consistent deployment even at temperatures as low as -22 degrees Fahrenheit. The system can be charged with two AA batteries and last up to 3 months without being recharged. It can also be charged via a USB charging port--which is especially useful for practicing deploying your airbag as many times as your heart desires. The E1 Alpride system is safe and approved to fly with, so no need to worry about filling up your canister when you land. To inspire confidence before every outing, the deployment system has an automatic test function with LED indicators that performs a self-test of all its components and systems every time it is turned on. This TUV-certified pack has a diagonal carry as well as an A-frame and snowboard carry option. The pack has two separate sleeves in the main pocket for your shovel handle and probe, ensuring quick and efficient access in case of an emergency. The SCOTT E1 30L pack is the perfect companion for long days of getting after it in technical avalanche terrain. 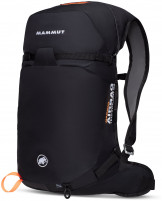 What is the extra 4 way strap that was inside the bag? The one that looks like an “h”. Has 2 clip ends and 2 Velcro. Helmet holder? How does it attach?
Answer from Brett S
Thanks for reaching out, Mike. It sounds like you've found the helmet holder. There is a product picture above that will show how to use it!
Answer this question:

Second full season with this bag. It’s a decent pack but I do agree with the above con of the shovel/probe pouch - not thought out at all. Actually there are a lot of things not though out with this bag.

The axe holder is janky to say the least. The adze end has no secure connection and falls out at will. A Velcro connection for both side of the axe is very dumb. The helmet ‘’holder” if you could even call it that is another after thought that “secures” to the Molly webbing.

The buckles when holding skis in the a frame also tend to loosen rapidly.

It does ride very well on my back and I ski without barely noticing it. Also the actual inflation part of the pack is awesome. Never had to actually use it in the real world.
Reply from Barry B
I always assumed the velcro in the bottom middle is just to keep ice axe picks from tangling with other stuff. But depending on how angled the pick and shaft are the pick may not even end up in the right place to use it. I mostly ignore it.

If you are only carrying a single axe you can use the bottom loop for the diagonal ski carry. If you want to carry 2 axes or simultaneously use the diagonal ski carry then you just need to tie loops of cord onto the bottom link of the daisy chain. Those combined with the velcro shaft straps work great to carry 2 axes securely.
Comment on this review:

I own three of these Scott bags now. One for me and one for each of my kids that tour with me. I think they're the best avalanche airbag out there (obviously, or I wouldn't own three). They're fairly lightweight. I love not messing with air canisters. The functionality of the pack is good as well. Here are the things I don't like. 1) The zipper on the main compartment is pretty flimsly. On one bag it has failed. I was able to rig a fix, but it's not perfect. 2) The pouch for your shove and probe is closed with just a flap of fabric and piece of velcro. Everytime you open your pack up wide, there's a good chance your shovel and probe are going to fall out into the snow. So, some room for improvement, but overall I'm happy.
Comment on this review:

Is there a rope cary with this pack?
Answer from Teddy Young
Hey Collin, thanks for reaching out! You could carry a rope with the side compression straps, which should keep it clear of the airbag deploying.
Answer this question:

Upgraded to this from 15+ years of air-canister packs. I LOVE that the electric engine is so easy to test and reset. I like to test my packs before each winter and then once during winter somewhere in the field where I can experience what it's like to blow it while skiing. Not having to pay to refill makes this something I can do regularly. Folding away the airbag is easy and simple. It's nice to be able to remove the airbag for spring missions where burial is not the concern. The goggle pocket is huge and padded and fits goggles and quick supplies nicely. Straps are easy to use and set. Two downsides - the shovel/probe pocket isn't a sealed zipper and things can try to fall out when the pack is full open, though I've had no issues as of yet. Also, no hip-strap pocket, which I'm a fan of for quick access snacking on the go. I highly recommend this pack to anyone!
Comment on this review:

My number 1 gripe is de-flatting the bag. The de-flat knob is small and inside the fan compartment, which means opening two zippers, the pack contents are exposed to snow and the fan zipper handle is not easy to maneuver plus the knob requires a lift a quarter turn and HOLD while laying on the balloon forcing the air out!. This is my second season with this bag, I've deployed this twice in avy conditions. I don't recommend this bag till Scott deals with a better de-flat mechanism.
Comment on this review:

Haven't used this on the snow yet, hopefully soon, but I've loaded it up and worn around the house and deployed it and before buying did a lot of research because apparently when spending $1000+ on a pack I obsess.

I was able to get hands on the 30 SL, 30 NL, and 40 NL versions of this pack. I'm 5'10" with a shorter torso that in practice is 19". The SL worked for me but my torso is the longest that would be able to get any use from the load lifters, they end up just above the tops of my shoulders. The NL also worked for me and if I was planning to carry any amount of weight I'd prefer it as the load lifters end up about 2" above the tops of my shoulders, where they can better do their job.

Scott doesn't publish specs on the 30 SL and when I got in touch with their support they didn't have any data either. Note that the SL doesn't just have a shorter torso length, it is a smaller pack. It was too heavy for my gram scale but I measured it as 2.49kg on a less accurate scale. I don't have a good way to measure volume but based on packing my normal kit into both I'd guess the SL is about 2-3l smaller in volume than the NL. My other pack is a Dynafit Speed 28 (https://skimo.co/dynafit-speed-28-pack) and the 30 SL seems to hold about the same amount of gear.

The 40l has a wider, padded hip belt but the 30l packs just have simple narrow straps for the hip belt. However the back panel on all of the pack is fairly robust and once curved to my back the simple hip belt strap is surprisingly able to lock the pack into place.

I also looked at the other Alpride E1 packs available in the US, the Black Diamond Jetforce Tour and the Osprey Soelden Pro. The Osprey pack seems like a decent design but it is heavy and overly complex (in other words it's an Osprey pack). The BD pack seemed simple and light on paper but has a few design quirks. The bottom ski carry loop is very difficult to use with wider skis. The pack opens like a suitcase with a C shaped zipper that goes along the top, one side, and bottom so if the zipper blows out you are totally hosed. I saw a couple of these packs in person and inexplicably some didn't have compression straps while others did but the straps close with hooks that easily come open. External attachment options are very limited (helmet, single ice axe). The back panel is more flimsy and wider than the Scott pack and didn't let me get the same glove like fit.

I ended up deciding to go with the 30 SL because it was the best volume for me. For such a small pack I'm not too worried about carrying some of the weight on my shoulders. The only downside I've seen so far is when deploying the airbag the shorter pack means that the airbag pushes into the back of my head a little, seems minor.
Comment on this review:

What maximum torso length does the NL fit?
Answer from Teddy Young
Hey Ben, we just reached out to SCOTT and we'll give you an update when we have heard back from them!
Answer this question:

There is an SL version of this backpack (Alpride e1 30). Can you order it for the fall?
Answer from Tim
Hi Gil,
Yes there will be an SL version of this pack arriving at some point this fall however only available in the blue option. We are waiting for confirmation from Scott and when we have it you will be able to pre-order the pack.