The 95 is the flagship touring width of the new Zero G series. Designed with heaps of secret experience building skis for other brands, these are no introductory models. A unique 3D fiber layer called Carbon Drive spans the entire ski, offering torsional rigidity and stability throughout. Full-length sidewalls offer some durability and dampness to the ultralight Paulownia wood core. Camber underfoot with mild tip and tail rocker make for mild high-performance skiing. For more hardcore types, check out the 85.

Update 2019/20: Blizzard reworked this ski significantly enough that we decided it needed its own listing, which can be found here. 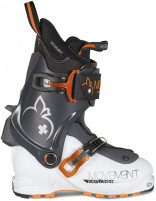 Hi, I'm tied between 171 and 178. I'm 176cm and weight 165lbs. Will be using mostly for ski mountaineering objectives. All my skis are in 177 to 180 range. I have skied the 0G108 in 178 and it felt great at high speed, stability and powder. It didn't feel a lot of ski but the length did feel sometimes a bit when skinning and kick turning. Since the 0G95 is lighter and I would have a pack, I'm kind of trying to guess whether the kick-turns should be easier and handling as well, plus the extra length may be helpful on icy terrain and powder. What are your thoughts?
Answer from Trace Leches
Hi Subhrojyoti B. I am 174cm and would definitely prefer the 171cm for any mountaineering usage. If you are purchasing this for use as a mountaineering ski, make sure it can function as a good mountaineering ski by getting the proper length. It would be a bummer to get a lighter, narrower, more maneuverable ski, but then get it too long and make it unwieldy in the terrain you want to use it in. It skis long anyways, so it's not a short 171cm ski.
Answer from Subhro
Thanks Trace. Will that logic hold for the Salomon MTN Explore 95 as well, which I believe has a slightly more tip rocker. Should have mentioned I'm considering this one as well, but 169 is too short.
Answer from Trace Leches
Hi Subhro! Jump turning is a pretty good equalizer for skis in general, so I think that logic applies to any ski. What I mean by that is effective edge has almost no input on how easy a ski is to jump turn and instead it has more to do with absolute length and the relative mass. Jump turning a very heavy fully rockered 180cm ski with a very short effective edge will still be brutally difficult, even though it's incredibly nimble on the snow thanks to the short effective edge. In contrast, jump turning an extremely light 180cm ski with a long effective edge will be far easier, purely because it's lighter, even though the effective edge makes it longer and less nimble on the snow.

I'd agree that the 169cm seems a bit short for the MTN Explore 95 at your height, but it's still not out of reach. To put it into context, I am 171cm tall and my mountaineering ski is a 164cm Voile Objective, which has a lot more tip and tail rocker than the 0G95 and MTN Explore 95. It's a fun ski that has a speed limit in lower angle terrain at that length, but it is a riot in steep terrain because it's so light and short. Also, one thing to take into consideration is the boot selection. If you are in a burlier boot, maybe consider the longer length a bit more heavily. If you are in a lighter boot, consider sticking with the shorter length.
Answer this question:

Would either the Fischer Travers Carbon or Scarpa Alien RS be a good choice for the Zero G 95s? Thanks!
Answer from Trace Leches
Hey Ollie! I think either of those boots would do really well on this ski. The Alien RS *might* in some terrible snow situations feel a bit under-gunned though, so keep that in mind.
Answer from Trace Leches
Hey Ollie! Also, I should point out that Scarpa doesn't recommend the Alien RS on anything wider than 85mm at the waist. There is more than enough power behind the boot to drive a ski that wide but they don't like the idea of it being on a ski so "huge."
Answer this question:

Any thoughts on pairing this ski with the Sportiva Spitfire 2.1 boot? I’m 6’5”, 170, moderate skier, never toured or skied uphill before, looking for a good first setup. Would 178 be a good length, or do you think I should bump up to 185? Thanks!
Answer from Nate
Hi Michael, the Spitfire 2.1 is a great pairing with this ski. At your height, I think I'd bump up to the 185 length in this one.
Answer from Michael R
Thanks! Looking to round out a package and leaning towards the G3 ion 12 binding—any thoughts or other suggestions? Would 100 mm width be the right size for this ski? And any skin recommendations?
Answer from jbo
Hi Michael, that is a decent match and is a good entry to tech bindings (not least because of the ease of said entry). The 100mm is the right brake size and the precut skins work great!
Answer this question:

Are the weights posted taken measured by you? I'm asking since I've seen published weights of around 100g lighter per ski. Thanks!
Answer from jbo
Hi David, yes we weigh all the skis we receive an publish an average. Look for "Specs Verified" to determine whether it's our weight or not.
Answer this question:

Hi-What changed on the Blizzard Zero G 95 skis from 2015/16 to 2016/17? Thanks.
Answer from jbo
Hi Jim, the graphics were updated to solid green.
Answer this question: