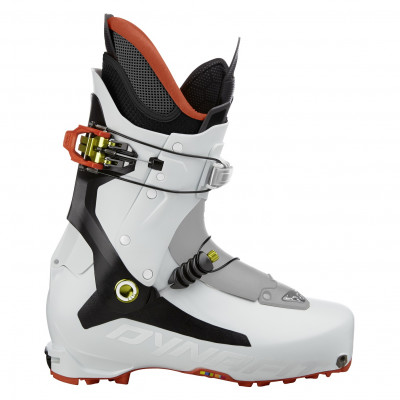 The Expedition version of the TLT7 features a Custom Ready liner that is warmer and takes up more space within the shell. This makes it a better fit for skinny-to-average width and cold feet. All feet will appreciate the toe fittings being moved closer to their natural pivot point. This fact, combined with the Snow-dynamic concept and Speed Nose make the “7” the most efficient climber yet in the TLT series. Turns out the ski down is pretty great too, with a simple fixed tongue system that locks into place with one motion of the new two-in-one UltraLock 3.0 closure system. The TLT7 Expedition is sophisticated enough to be incredibly simple.

* Note: The nose eliminates the traditional toe bail so a special adapter is needed for automatic crampons. 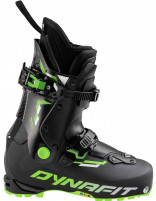 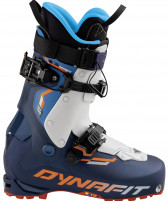 Skews more towards the uphill than down. Decent performance, good price. Speed nose may sound like a gimmick but makes for noticeably more natural movement. Quick transitions compared to traditional boots with 3+ buckles. Internal cable system can freeze easily.

Until very recently, my quiver of boots included these and the Scarpa Mastrale RS. I had about 30-40 days on these boots until they developed cracks in both shells and were replaced with the performance version.

The performance version is what I would recommend for larger or more aggressive skiers, however, the performance liner is only adequate for warmer weather and/or racing. The stock liner in the expedition TLT7s much more comfortable and warm for all but the harshest winter conditions. I replaced a near-paper-thin insole with a superfeet insole - great decision.

To combat the cable icing problem, which I've experienced a few inopportune times, I sprayed the cable with WD40 and then coated the cable sheath in thick bike grease. The grease makes the cuff of your liner pretty gross, but it has been effective in preventing the cable from icing up. WD40, or another waterproof lubricant, would probably be effective alone, but would likely need to be reapplied more often.

Everyone needs to pick boots based on their own fit preferences, but I found the toe box a bit narrow and punched to about 106mm on the exterior. The cracks that developed were not near where the punching occurred; i don't think the cracks are related to the punch.
Comment on this review:

I have to echo most of what Anthony O stated earlier. The fit of these boots is 200% better than the older TLT6's. I usually need to do a lot of boot fitting, but just cooking the liners made these super comfy. No problem with the cable actuated buckle, but I don't force the lever. It also helps to flex the cuff forward, reducing the force needed to close the buckle. I remove the liner after each days’ use to allow it to air dry, and it is much easier to remove and reinstall than with other boots. I usually put them on at home because I can drive my truck just fine with the boots on.
Comment on this review:

I love these boots. I've had them for three years.

One small issue I have, is that on multi-day trips the wire in the fastening system freezes to the coiled sheath. Has anyone figured out a good fix for this?
Answer from Derek W
Yes cut all those cables and make the boot like a PDG.....I broke my cables twice;)
Answer from David S
Hey Derek W,
I was thinking about cutting the cable and adding my own instep buckle, as you suggest. Would you be interested in showing what your modification looks like and/or update how you feel about the mod after skiing with it for a bit?
Thanks.
Answer from Derek W
Well, if I wasn't in grad school I'd have bought new boots two years ago....the mod certainly makes them much more like old school TLT's and has held up fine, but it's super hack. I just found some kids ski boots from second hand store, cut the important parts off and ghetto'd them onto my boots for an instep buckle. I've skied these boots for a few years now, but this is the last season on them. Dynafit went too gimmicking with this one, unfortunately.
Answer this question:

Hi
Is there any difference between men and women models except buckle color?
Answer from jbo
Hi John, not much in the way of differences, but the liner is tweaked for the women (cut slightly lower in the cuff, e.g.).
Answer this question: 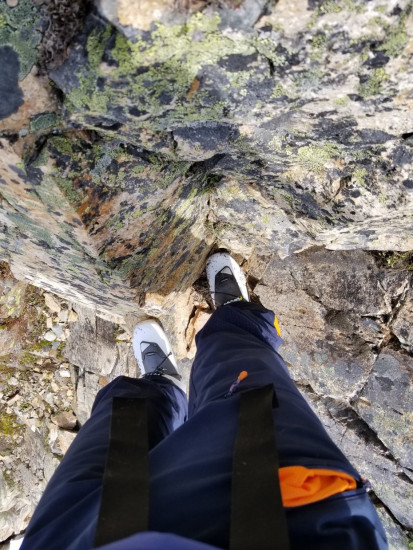 There are a lot of haters on the tlt7 series, and I honestly think that they're just behind the times. As a person who climbs rock and ice in ski boots, I do not feel the need for a fully automatic crampon, as most of my fast-and-light boots do not have a toe welt anyway, as I've been using semi-automatic crampons for years. In my opinion, there is almost no time difference required when attaching either semi-automatic or automatic crampons, as long as the crampon is sized properly. The speed nose concept is brilliant, and actually does make a difference, both in walking and climbing on rocks and in skinning, It's just science, if you reduce the length of a lever arm then you reduce effort. The high-volume fit works perfectly for me so much so that I can go down in an entire size, which I never thought I would say with Dynafit. I've also seen a lot of reviews about products breaking, which is interesting considering that I tour almost daily in mine. Last week along I got nearly 22,000 feet of earned turns. Including lift service, I'm easily over 200,000 ft. on these with no issues. While I don't huck cliffs, I occasionally like to jump things, and I do not baby these boots at all. No lower cuff issues, zero releases, and no slop has formed in the cabling nor have I noticed any issues at the cuff pivot. The boot also punches very easily and is easily modifiable without fancy equipment. The people who are having issues either got a bad batch that I have no doubt Dynafit would warranty, or they are being unnecessarily rough on the latching mechanism. I simply apply a gentle pressure and close it steadily. I suppose if you just ripped on it as hard as you could to throw it back (and repeatedly did this), you would introduce unnecessary strain on the cabling. Either way it's a great boot, and I hope Dynafit continues to make boots that fit average feet like these ones do, instead of the ridiculously narrow ones of the past!! I also applaud the innovation. No faffing around while my partners are dropping their tongue inserts, or worrying about some other nonsense. One flick and I'm already ready for the next lap. Get a pair and try for yourself, obviously the biggest thing with the ski boot is going to be fit, but if this boot fits your foot well then I highly recommend it (or any of the 7 series).
On another note the rubber sole holds up extremely well, I literally wear mine for more than half the day most days, including running errands, driving, and going to the grocery store after skiing, and all that walking on concrete has literally done nothing to them.
Comment on this review:

Worst boots I've ever owned in 25 years of ski touring. Last year I broke the shells on day 10, the cable on the forefoot buckle on day 12. This year the lower cables freeze up and I can't free them to buckle the boots tighter. Today I broke the required crampon adapter in a bad spot, that made the event rather dangerous. Avoid these boots like the plague that they are.

Sorry to be harsh, but they really are just garbage and full of gimmicks.
Comment on this review:

Any updates on the Expedition vs the Performance regarding fit, etc? I'm curious as to whether there are any differences in boots besides the color and different liner?
Answer from jbo
Hi Matt, the fit is different due to the liner. The Expedition has a thicker liner so the boot feels smaller. The Performance has a fairly generous fit, especially by historical Dynafit standards. The other difference is the material in the Lambda frame. There is a bit more stiffness with the Performance shell due to the more rigid Titanex material. It's noticeable but not vast. Maybe worth "10" on the stiffness rating.
Answer this question:

Love these boots. In the last two years I've been on the Scarpa Alien and Syborgs. These are heavier, but you can actually drive a 105mm ski with them. A real ski boot with a modest weight and a solid, non-gizmo locking cuff.

Oh, and thanks for the quick shipping to AK. You guys run an amazing business.
Reply from Derek W
Read my review after actually skiing on them for more than five days. Ughh
Comment on this review:

When I check the size charts for the TLT7 Exp and Perf it only brings up the size chart for the TLT5/6's. Everyone I've talked to says they have increased the volume in the shell from last year and the Exp. fits much differently than the Performance. Do you have new size charts that reflect the changes for this years model boots?

Thanks,
Brad
Answer from jbo
Hi Brad, the size chart hasn't changed but the subtleties have. I'd suggest using our Boot Fitter to find the right size for you.
Answer this question:

I've been having trouble finding reliable info about how the Expedition performs up against the Performance and Carbonio. Any input?
Answer from Trace Leches
We got the Expedition boot and the Carbonio boot already (waiting on the Performance version) but have already sold the comparable sizes in other versions so we've only gotten to try on a few boots here and there. Give it a week or two and we should be replenished and can give you a better answer once we have all been able to spend some time in each version.

I can say definitely say one thing about the TLT7 across the board though, given my admittedly limited hands-on experience so far: They are rad. I like them a lot and unless someone else can toe the line with a better offering, this will set the bar pretty high for the 1kg boot category.

-Trace
Answer from jbo
Hi abp, only the Performance version was available for testing last spring, which is why there aren't any good comparisons yet. Note I've seen at least one review for the Carbonio version that was clearly made up (because it had not been available for demo prior to the July 2016 "review"), so be sure to check your sources.
Answer this question: