Long have other brands made skimo race skis in their factory. Long have they dabbled with their own models in Europe. Short is the time Fischer predicts it will take to dominate North American podiums. With a weight-to-price ratio that is hard to beat, it certainly won’t take much time to test the prediction.

Handicappers are quick to point out the Alpattack’s Aeroshape technology, a curved construction that sheds not only ski weight but also snow weight. The convexity makes it hard for snow to build up on the top sheet while simultaneously optimizing quickness and edge hold. Paired with the new Tour Race binding, chances of winning are not low. Odds of a podium finish this season are currently 3-to-2. Place your bets.

Contrary to many other reviews, I have not yet snapped my pair of these. They're extremely light (with 110g bindings and screws mine come in at 755g which would suggest mine are 625g per ski). They ski alright, definitely a lot of chatter and not very confidence inspiring as compared to some of the heavier race skis. One major issue Ive been dealing with is edge delamination. The metal edges are very thin and the edge and base are starting the separate from the ski at 3 of the 4 underfoot edges. I've heard this happens are other Fischer skis with the "aerodynamic shape" and as such, I think I will avoid Fischer skis form now on.
Comment on this review:

Can you order the Fischer Alpattack in a 151 cm?
Answer from Trace Leches
Hey Tom! Looks like they're out at the moment and we won't be seeing any more until fall.
Answer this question: 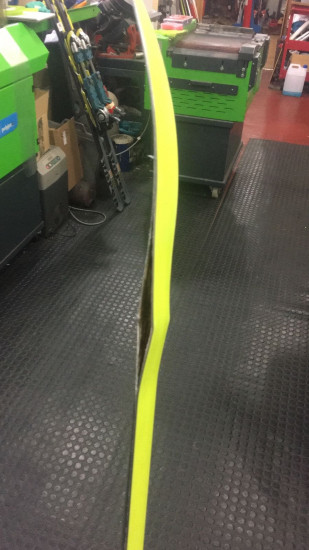 I fell at a considerably low speed and one of them broke. In my opinion the weight doesn't make up for the chance of snapping the ski.
Comment on this review:

Are there any differences between the older green model and the black one? They both seem to share the same profile and construction.
Answer from jbo
Hi Jon, they have the same shape and basic construction. A few improvements were made to the ski, such as tapering the reinforced mounting plate further towards the tip to avoid a pressure point that could cause the ski to snap under extreme flex.
Answer this question:

I bought these earlier this season and used them a few times in training before using them in Pierra Menta. I skied in to a mogul at a fairly low speed and one of the skis completely snapped in half. I'm not heavy, only around 70kg.
Fischer says it's not covered by warranty. If you want a poorly made ski that you can't trust then get these. Otherwise I recommend you choose another manufacturer.
Reply from jbo
Hi Robert, did you have the older green model or the new carbon version? A ski breaking in half is covered under Fischer's warranty, we'd be happy to help you out with that if your retailer was not able to do that for you.
Reply from Robert B
I had the new Carbon version. I'd bought it in Germany. The retailer sent it back to Fischer, who replied that they couldn't find any material faults and that it was damaged in a crash and so isn't covered by warranty. This despite also the Fischer representative at Pierra Menta telling me that they would replace it without issue if I sent it in.
Reply from jbo
Sorry Robert, we have friendlier return policies in the US. In this case, warranties are handled by a local distributor who maintains the brand's image in the US by servicing such requests.
Reply from Robert B
Ok, thanks. It is a big difference between the US and Europe. In the US, as a customer, I feel appreciated and valued. In Europe often I just feel like an inconvenience. I'll try to contact Fischer directly to bypass the shop.
In future I'll seriously consider purchasing my skimo equipment from the US.
Reply from Alastair B
I was at a race last weekend and someone snapped one of these skis. Although somebody else also snapped one of the new dynafit race skis as well. Maybe ski trab is best?
Reply from jbo
Hi Alastair, for what it's worth, we've seen all of the race skis snapped! Of course the Ski Trab was only after doing a 360 off a small cliff...
Comment on this review:

I was previously using a pair of Blizzard tour race, and these are noticeably lighter. Their weight actually came in under spec, one ski was 641.6g the other 640.9g
Considering they are a rando ski, they do well on the down. On the groomers and bumps they have good edge hold. In the backcountry the softer tip does better in variable conditions than I was expecting.
As for durability, I'm 6'5" and 190lbs and they haven't snapped yet :)
I would definitely recommend these to anyone as a race ski, or for really long ski touring where the down isn't as much of a priority
Comment on this review:

I just got myself a pair of Alpattack carbon skis and an ATK Race Revolution binding, promising setup! I have a quick question about the mounting, I do have templates for the ATK binding and that is a no brainer regarding the hole pattern, although I wanna be sure to get the right position on the ski so should I mount the front piece so that the tip of the boot is in line with the pivot line marking on the ski, and then adjust the placing of the heel after my BSL? I have a Dynafit EVO boot BSL 279 (26.0 MP)
Answer from jbo
Hi Tony, the toe pins should line up with that mark in the front mounting area, not the boot tip.
Answer this question:

I am 6'2 and 165lbs. For skimo racing these skis are amazing! Super light, and they ski surprisingly well considering their weight.

Unfortunately, I did just recently learn the hard way that using these for any fast and light spring missions in the backcountry may not be the best idea as I snapped one of the skis right in front of the toe piece coming down a steep, and somewhat firm, couloir off a Colorado 14er. I have also seen another pair of the AlpAttacks snapped in half from someone else at the Power of Four this year. I will probably get another pair, but will use them strictly for racing or laps at the resort.
Comment on this review:

I am 6'2" 178 lbs, and logged about 110 k feet of vert on these planks so far. About 1/3 hardpack mogul type terrain, 1/3 variable wind scoured moguls ( which is to say smashing blind unseen moguls hidden in slabby variable snow and not bending the skis yet) and the other 1/3 groomers or occasional uplift serviced terrain. I have them mated with the matching bindings. Performance has been stellar, no serious damage as of yet, although I try to be careful and we've had good coverage in our area this year. More impressed with nosing hard into moguls and no bendage or snapping yet. Skis weigh approximately 13 oz. Each less than my other race set up which is amazing for the race arena. They ski comparable to other race skis as they all seem about the same dimensions, and I have skied other skis. Bottom line is if your shopping for race skis, get these as their weight to price ratio is favorable over other makes/ models. I have also some friends from the race seen that have been on the same pair all season as well- so that speaks on the durability side a bit.
Comment on this review:

I just got these and so far love them. Extremely light (paired with the Fischer Race Tour Bindings and Dynafit PDG's) and ski well. I've skied them on groomers and they rip! I skied on 4-6" of light powder on a hard base and they worked wonderfully. I skied on crud and they skied as well as any other race ski (but not a fun experience). I'd definitely recommend them to anyone else who is looking for an ultra light racing set up. I've been pleasantly surprised on how well they ski.
Comment on this review: