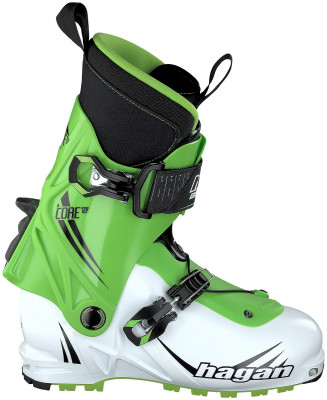 If you want a simple backcountry touring boot that walks and skis well, check out the Hagan Core. Loaded with marketing acronyms (below), the Core boots aren’t loaded with complexity. A micro-adjustable lower buckle uses a wire to get the effect of multiple buckles locking your heel and forefoot in place. An infinitely adjustable upper Velcro booster strap acts as the top buckle. A reliable ski/walk switch in the back changes modes. Put your feet in, walk uphill, transition, ski down, repeat. The Hagan Core boots have that procedure mastered.

Would anyone have some thoughts as to how well these boots could drive a pair of 1,600g skis, 100mm underfoot, 174cm in length? Too much ski?
Answer from Trace Leches
Hey Conor! It's not the first ski that I'd throw this boot on, though I've seen this boot drive a whole lot more ski than that before. When you get on skis that big it really takes a bit of extra strength and input from you as the skier to keep it under control, especially in weird conditions, but it can be done. Check out Robert Bonneli's review of the Movement version of this boot for a good idea of what it's capable of. He's a former alpine racer and one of the better skiers I've ever seen and does it all in this boot.
Answer from Conor P
Great, thanks! I was hoping his review was applicable to both boots, I appreciate you making that clear.
Answer this question:

Two questions:
1) How does the fit on these compare to Dynafit? I fit pretty well into the Mercury/Neo in a 29.
2) The previous reviewer said these can have trouble fitting crampons. Do you know if they'll work with a BD Sabretooth automatic?

Thanks
Answer from Trace Leches
Hey Kameron! Fairly similar actually. Instep height/volume will be the most similar between the two. Forefoot is close-ish to a Dynafit Mercury, but the Core is a little bit lower volume/narrower before you mold the liner. The liner molds REALLY well so you can get a surprising amount of room out of it. The biggest difference will likely be the heel pocket, as it's a bit more cavernous than a Mercury/Neo.
Answer from Kam
Any idea about crampon heel levers? I'm getting mixed info on this.
Answer from jbo
Hi Kam, your mileage may vary. Is there a particular crampon we could test for you?
Answer from Kam
I have the BD Sabretooth semi-automatic model. The heel lever is approximately 2 3/8" tall.
Answer from jbo
Hi Kam, turns out the CAMP crampons have the exact same lever size so we tried those. There is contact with the cuff as it pivots which could knock the crampons off. With this boot it would be better to use the Grivel Skimatics or CAMP Race crampons.
Answer this question:

Hagan does no marketing- and as a result, it's easy to overlook their outstanding offerings. Which is a shame because they make some of the best, simplest, most affordable skimo gear out there, these boots included!

If you want to summarize the review, just read this- beef boot performance with skimo simplicity and weight. If you've been hesitant to get into a lighterweight, <1200g boot because of fear of giving up performance, this is a good option for you. Don't let the lack of carbon fool you, these boots are stiff, and ski much more like an overlap alpine boot. Comparably stiff if not stiffer than the TLT6 with tongue (definitely not LESS stiff), but with a more natural and progressive flex. The simple walk/ski mechanism is easy to use, and makes transitions a literal flip of a switch (or two if you loosen the cuff buckle during touring.) The boot has a very natural, progressive flex- the most similar boot out there IMO is the F1 Evo, but this boot has a more natural feeling flex to it and is simpler.

The simplicity was the biggest appeal of this boot for me- after 5 seasons in TLT5/6, I was tired of the fiddly tongues and ultra-lock switches and just wanted to flip something on my boot and ski. This meets that criteria very well.

Why not 5 stars? Two reasons- first, the ski/walk switch interferes with many crampon levers, or at least has the potential to so much that I would not feel comfortable trusting my life to it. I switched to the the Grivel ski-matics, which work well and for which there are no problems. Camp race 290s would work well too, or any crampon without a heel lever.

The other reason for 4 stars is that there is a *slight* increase in touring resistance vs. something like the TLT5/6. This is because you flex the plastic tongue with each step. It really is slight, but you will notice it. But a worthwhile tradeoff vs having to fiddle with tongues to get this sort of performance, which really is great. And I spend most of my time in zero-resistance race boots.

I didn't even notice the lack of power strap, which is NOT true of other boots like the TLT. Really.

So if you've been wanting to go light but are worried you'll miss the big boot performance, I think this is the boot for you. I am super stoked to finish off the spring with them!

My feet are really wide, was about to pull the trigger on the spitfire 2.0, but saw this, what are your thoughts? seemingly similar specs, have you guys skied them as an all rounder? Already have syborgs, looking for more of a do it all and cant do under 100mm last, larger is more preferable.
Answer from jbo
Hi Anthony, the published last on these is 101mm in a 27.5, but my feet think they are closer to 98. The Sportivas are wider.
Answer this question: