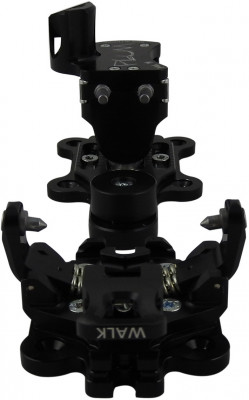 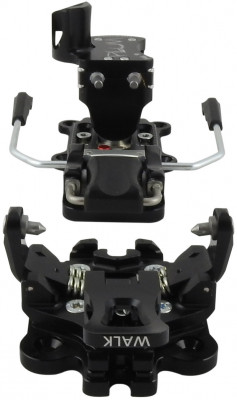 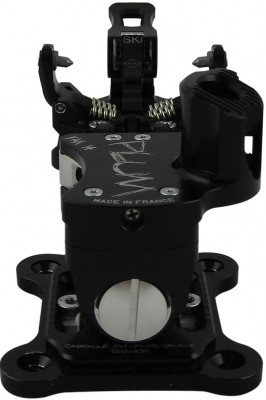 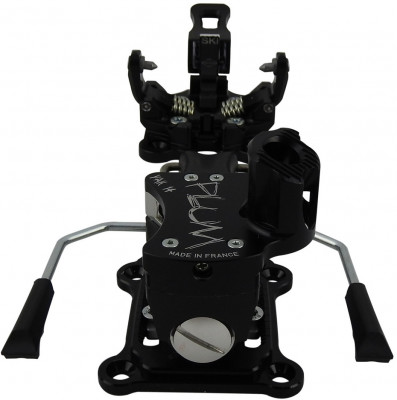 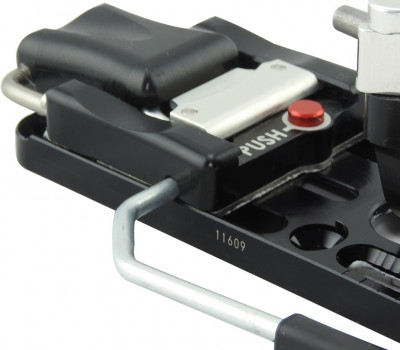 The Plum Yak just got two louder and one shade darker. That is, you can crank the release value up to 14 instead of 12 on the original, and it’s now black. The rest remains the same, meaning is the lightest binding for fast skiing on fat skis. The Yak 14 binding has an extra-wide mounting pattern to help with power transfer and reduce the chance of pullout on wide skis. It also has a support pad in front of the heel pins to accommodate your weight after a big drop if your skis are at least 95mm wide underfoot and you are at least a 7 on DIN charts, you qualify to ride the might Yak. The only choice is whether you want brakes. A slick sliding mechanism locks the brake arms up when skinning, and a simple push of a button releases them to go skiing. The Plum Yak is the binding for powder aficionados who want to ski many laps in the backcountry on mini-snowboards.

Update 2018/19: The Yak got more in stock; Plum upped production levels to provide for you.

Hi Skimo team, what drill bit size is required to mount these Yak 14s? Thanks in advance!
Answer from Will McD
Hi Jack. The drill bit to use is actually determined by the ski. The most common bit is 4.1 x 9 mm, but most skis will tell you somewhere on the topsheet or sidewall what bit size to use. Let us know if you need advice for your specific ski.
Answer this question:

I have this binding mounted on a Corvus Freebird (109mm underfoot) looking for a ski crampon now. Should I stick with the Plum ski crampon in 110mm or is the Dynafit ski crampon in 110 compatible as well?
Answer from jbo
Hi Kevin, you'll definitely want the Plum crampons for those! The Dynafits won't slide in.
Answer this question:

Hi for freeride and some on piste use between yak, summit, vipec, xenic or atk fr14 paired with vamox freebird 96mm what will be safest choice?

Piums have din release in toe and heel, this means its safest than atk in a fall (i guess atk toe is fixed at din8 so anyway i ski alwas din 8 at toe and heel)

So maybe just vipec add extra safe for the knees? And will be with xenic the only one with release in avalanche uphill right?

In conclussion what will be the two best choices with better power transmition and safe for downhill?
Thx
Answer from TSB
Hey, Gabriel! Thanks for reaching out -- I think you had a question over on the Fritschi Xenic page as well? It sounds like you might be well-suited to the Fritschis in general given the elasticity in the toes, which will ideally allow for a consistent release when skiing downhill as well as added releasability on the up. The Plum bindings you mention, Yak and Summit, do not have any specific toe-piece features beyond typical tech bindings -- nor are they DIN-certified, toe or heel. The ATK bindings, which we sell as the Hagan Pure and Core, are also good options from a descending standpoint but don't offer anything in particular in the way of safety on the ascent. Overall, it sounds like you're a Xenic kind of guy, but don't hesitate to reach out to help@skimo.co to chat more!
Answer this question:

What is the distance (width) between centre of mounting holes for both toe and heel on the yak 14? Most websites state a 50 mm mounting hole width, but a page on skimo listed a 50 mm width for toe and 55 mm width for heel. Thanks
Answer from I-M
Tim, verified the mounting hole pattern.
Plum Yak 14
Toe:50 x 50
Heel:55 x 58
Answer this question: