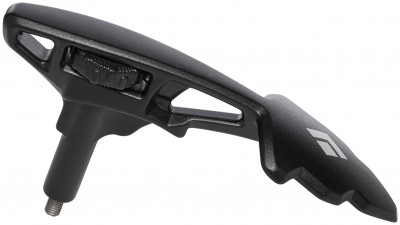 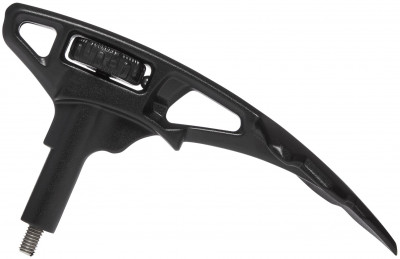 Whether you're pushing the limit in your own back yard, exploring a new mountain range, or simply want to be prepared for the unexpected, the Black Diamond Alpine Whippet Attachment has you covered. Using BD's ClickLock Dial, this head attaches to your Whippet Ready poles quickly so you can feel more secure when you find yourself in steep, soft snow. Shaped more like an adze than a pick (an adze-shaped-pick, using inscrutably complex Skimo Co parlance), this tool will catch better in soft snow than a traditional whippet due to its wider, tapered-towards-the-tip profile. Black Diamond does call this attachment a pick, however, so take our terminology with a grain of salt. Be prepared for the unexpected with the Black Diamond Alpine Whippet Attachment.

For almost two decades I had been using a Grivel Condor self-arrest grip, mounted on a succession of adjustable poles from BD and Komperdell. When I first got a Condor, back then the original BD Whippet was not very convenient to remove. Then it became fixed. And changed yet again to become easily removable. But it still seemed like overkill, and perhaps even literally quite lethal.

Somehow I didn’t notice the Alpine Whippet until its third season now of existence. The design is easy to criticize since it obviously will have less purchase in hard snow or ice conditions than the regular Whippet, or even the Condor. However, I’ve always been skeptical of self-arrest realism when skiing. Hence I’m counting on a self-arrest ski pole grip only for a fall that starts from essentially zero speed, i.e., skinning with ski crampons, or booting up with boot crampons on pitches where I don’t need the self-belay of an ice axe. I’ve also been wary of the injury potential from a skiing fall with a Whippet (and a friend did indeed severely lacerate his hand that way).

The Alpine Whippet feels like a perfect compromise to me. The pick – okay, really an adze – protrudes far enough, and is sharp enough, and is hard enough to pull off a self-arrest in any condition in which you can reasonably self-arrest with a ski pole self-arrest grip. If the Alpine Whippet isn’t sufficient for that in certain conditions, then I doubt most – or perhaps even any – skiers will have the skill and strength to successfully pull of a self-arrest with the more aggressive steel pick of the regular Whippet. Yet the self-laceration hazard with an Alpine Whippet is rather minimal compared to the regular Whippet.

The attachment and removal technique is quick and easy. Only drawback is that upon attachment you then have to stow somewhere the little grip plug (that presumably is there to keep the grip’s inner threads clean, as well as for aesthetics), and then upon removal you need to stow somewhere the pick – sorry, adze – but it’s small and slim enough that it will get along well with the rest of your stowed sharps.

As for the poles, I’m using the BD Alpine Carbon Cork WR, reviewed separately.
Comment on this review:

Hi,
what is the difference between Whippet and Alpine whippet? Thanks!
Kind regards, Matej
Answer from TSB
Thanks for reaching out, Matej! We too had this question when the two attachments arrived for the season. The original, steel Whippet is designed more for self-arrest purposes in steep and firm conditions, since the pick is sharpened and tapered at its front to insert into hard ice and snow with ease. Meanwhile, the aluminum Alpine Whippet, with its adze-shaped front, is better used in softer conditions, such as steep snow climbing. Both can be used well when ascending moderate alpine routes, while the original Whippet is preferable for self-arrest during ski descents.
Answer this question: