The Carbon Whippet is the high-tech big brother of the iconic Whippet. If you enjoy steep skiing and haven’t tried a Whippet yet, then you are missing out. If you have tried a Whippet, then you know handy they are in just about every situation. This iteration of the iconic staple of ski mountaineering features a totally removable Whippet head for unmatched versatility in any terrain.

Chances are good that if you are reading this you are well aware that, just like the weather and conditions, plans change. Sometimes you don’t know that the snow won’t be stable enough to go ski something until you’re already out there, but you’d rather not ski high speed trees with a knife in your hand. Sometimes the snow is so stable while meadow skipping that it’s enticing to safely cherry pick some of the neighboring chutes, but you didn’t bring your Whippet so it’s probably not a good idea. With the new Whippet you have even more freedom to move in the mountains without having to compromise on anything. Remove the head and stash it in your pack for lower angle terrain and quickly thread it on for increased security when the slope angle increases beyond your comfort zone.

* Please note Whippets are priced and sold individually, not as a pair.

Update 2018/19: The Carbon Whippet lost a section (it's now a two-piece) and the axe head became removeable

Update 2019/20: New FlickLock Pro adjusters are made with aluminum and feature an easier-to-use design. BD also added indexed baskets, meaning they put a tab on the basket which fits into a groove on the base of your 19/20 BD poles, holding the basket in place and eliminating spinning baskets. This update means that BD's new indexed baskets don't fit older BD poles, but older BD baskets do fit onto the new poles (albeit without the spin-resistance). 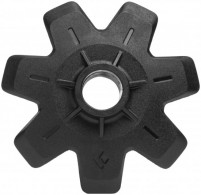 I'm wondering why anyone would buy the carbon version of this whippet vs the aluminum.

It seems the aluminum version is $40 cheaper for a more packable version with almost the same weight (and arguably more durable material?).
Reply to this comment:

Does anyone know why they switched to the two piece ? Is it less likely to break because carbon is more prone to snapping in half?
Debating buying one of these or two of the WR 3 piece carbon pole with whippet attachment for better pack ability. I don’t want to do that if that would give me an inferior whippet pole. What does everyone think as the gold standard for pole to go with whippet now that they have the WR attachment on most of their pole?
Answer from Brett S
Thanks for reaching out, Hillary. We haven't heard of any issues with current or previous designs regarding durability and we happily ski them all. Counterintuitively, the older carbon whippets weighed more than the older aluminum versions since they had an extra segment, so BD ended up swapping the design. If you want a lighter whippet, go with the current two-piece carbon. If you want a more packable pole, go with the current three-piece aluminum. Black Diamond has a few poles that are Whippet Ready (WR), which are the Whippet Ski pole or Traverse WR 2 ski pole. In our experience, both work quite well!
Answer this question:

You state that the carbon version packs down smaller than the aluminum version. Is that still true, now that the carbon is only a 2-piece? Can you give the packed size for each?
Answer from Jeremy L
Eric, thanks for pointing that out, we'll have to make some changes. The aluminum will pack down to 26" and the carbon is now 39-1/2" retracted.
Answer this question:

What are your recommendations for a single pole to pair with a Whippet? It seems odd that BD doesn't sell a pair made up of one Whippet matched with a non-Whippet carbon two-piece pole. Instead, is the only option to buy a separate pair of carbon poles, and wind up with three poles (and the expense of a pair in addition to the Whippet)?

Sure, I could pair a single Whippet pole with one of my ancient beat-up Traverse poles, but I was hoping to replace that pair this season. Thanks!
Answer from Trace Leches
Hey Jim! I think instead of buying a whippet and a set of poles this season, you could buy the new Traverse WR (Whippet Ready) and then buy a single Whippet attachment to install on one of the Traverse poles! Find the poles here and the head here.
Answer from Jim
Thanks Trace! I was considering doing that. It would be nice to have two poles with the carbon lower section, though. Maybe I could beg BD to sell me just a carbon lower so I'd have a pair that matches.
Answer from Trace Leches
Hey James! Ha! Never hurts to ask. Go for it!!
Answer this question:

Super useful tool. Gives a great feeling of security on those steep, exposed switchbacks and beats carrying an axe when you probably won't need one. I've even climbed ice with mine while swinging a full on alpine tool with my other hand. It wasn't ideal, but I also didn't die, so that says a lot about the whippet.

Also useful for manipulating toe levers, heel risers and partners or clients who annoy you...
Comment on this review:

A great spring skiing tool. It is a great ski pole. Balance, durability, comfort all leave no room to complain. The reason you buy it though is for the pick. That has been only psychological protection so far which is nice but it has allowed me to venture with a little more confidence to places where I would have paused last year.

-Wrist strap is very comfortable and ergonomic either in traditional ski pole grip position or in "piolet canne" (hand on top of tool). The strap is also very secure- you have to loosen it to remove it which is reassuring- it will stay with you in a fall!

-The 3 piece shaft compacts enough to make this pole still useful in hand even on very steep snow slopes. In fact I have not taken out my axe while this pole has been in hand. Im sure that might change at some point this spring but you get the idea- a very useful tool and if you can safely leave the axe at home think of the grams you shave!

-The included point protector. Sounds lame but I ski most of the time with this nicely designed little thing covering the pick. I only take it off where I feel I may need to self arrest (kind of like not leaving crampons on when not needed- always minimize the ways you can mess yourself up). An accidental fall on the pick would be ugly so may as well be careful... Shift the cord lock around to near the point protector and you will never be annoyed by this little thing while skiing.

-The flick lock has come a long way, these are way nicer than on my ancient Traverses. If I had one minor gripe it would be that at least on my flick locks, one of the tension screws that adjusts how tight they lock seems to work loose every once in a while even with blue thread lock. YMMV but Im guessing you bring along a small flathead anyway so you may get to use it!
Comment on this review:

I use this tool just about every day. My only complaint is about the weight since the word carbon in the name should denote a lighter version. Regardless, I take it with me as I feel the uses of the adze outweigh any weight penalties. I've used it to remove snow from bindings, as a screw driver, and for a dozen other applications that don't have much to do with actual skiing. When skiing though, it is most useful on the up, to increase security on steep firm snow. On the down, it's a nice mental crutch as well.

Also, I believe it comes with a full basket. I prefer half baskets so cut part off with a knife and now it's perfect.
Comment on this review: