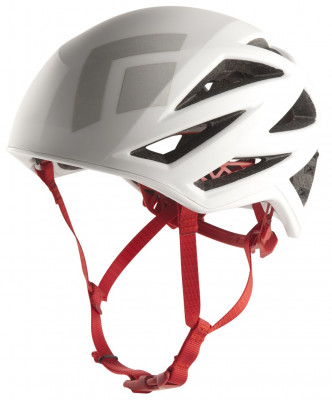 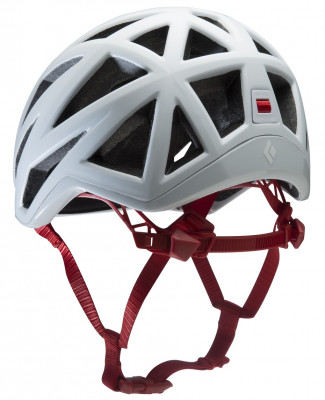 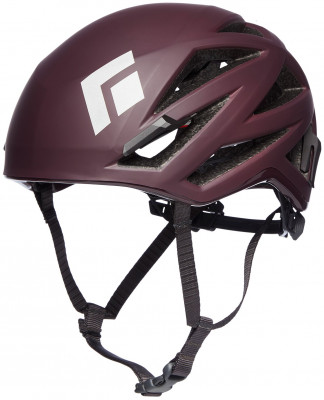 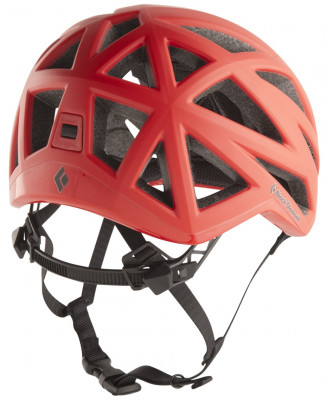 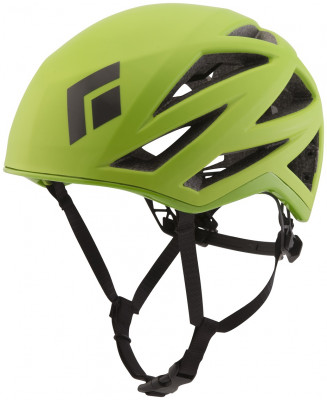 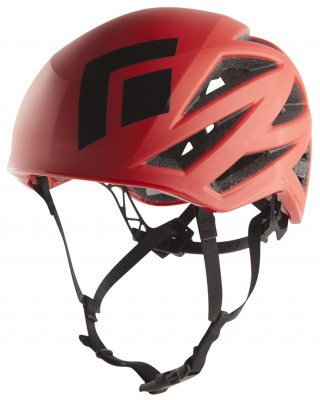 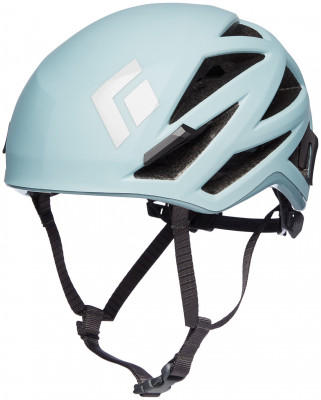 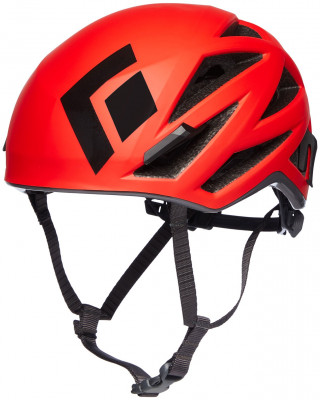 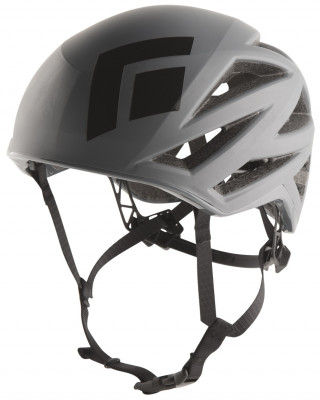 In the battle for lightweight head protection, Black Diamond has moved a-head with the Vapor helmet. With a head-turning weight of 199 grams (7.0 ounces) [M/L], the Vapor can already be seen atop the heads of many skimo racers. It’s packed in the back with head-cooling vents, while remaining head-lamp compatible. The fore-head is a smooth wind-blocking sheet, preventing head-sweat from percolating up and fogging your goggles. Get a head start with the lightest polycarbonate helmet and avoid head-aches from falling rock. Head on over to checkout with the Vapor head-bucket in your cart.

Updates 2019/20: BD updated their color options available for this season, but this helmet otherwise remains the same.

So this helmet went from a 4 to a 1 for me. With not much use I ended up cracking the helmet inside my pack. I am hard on my gear but it was shocking to see it happen so fast. I have not found this to be the case with the Petzl helmets. So I switched there and been happy.

With that being said, there were many things I did like about the helmet. Ventelation was good on this. Sleek look. I felt very comfortable with this helmet in both rock, ice, and skiing. To me, I like having protection for each sport. Incredibly lightweight.

So, perhaps handle with more care than I did. But anyone who does will love the helmet.
Comment on this review: 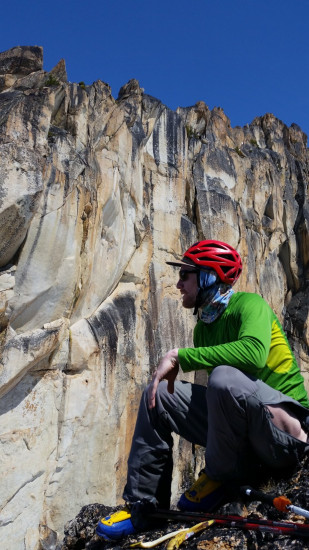 Rumors of this helmet's rapid demise may be greatly exaggerated. I have had two of these in 7 years, and used them for alpine climbing, skimo racing (pre USSMA standards), daily touring, mountain rescue work, a patient helmet on SAR, and for hydrologic fieldwork. I conclude:

1. It's light and vents well at output. You slap it on over your cap, buff, beanie, or naked some and just go. While your friends carry their ski certified helmet, you just slide it on and forget it's there. While early helmet wearing has been known to look dorky, it has no health risk and has never led to premature death while skinning.

2. It's durable enough. If you aren't slapping it into the bottom of your pack under crampons and climbing racks, it will not wear rapidly. Also, don't just throw it into the bed of a truck because it's light and will blow away.

3. Lots of holes, no longer certified for skimo racing. I mean, if you're into that kind of thing.

4. Fits better than Camp helmet sizes for big heads (I've tried), has good coverage on forehead and medulla oblongata, and if it seems undergunned, you can always buy a BD Vector or their new fangled ski rated helmet for more weight and less dollars.

5. Conclusion: I trust my life to this helmet and wouldn't hesitate to get another one because it's light, breathes, and is comfortable.
Comment on this review:

Great helmet for touring. I don't race but use this almost daily. It fits over a sun hat or beanie (or both) easily, vents super well in the spring or at high output, is light and is easily stuffed inside or strapped on the outside of my pack. It has held up to a lot of abuse as well and only now after 5 or 6 years am I thinking of replacing it.
Comment on this review: 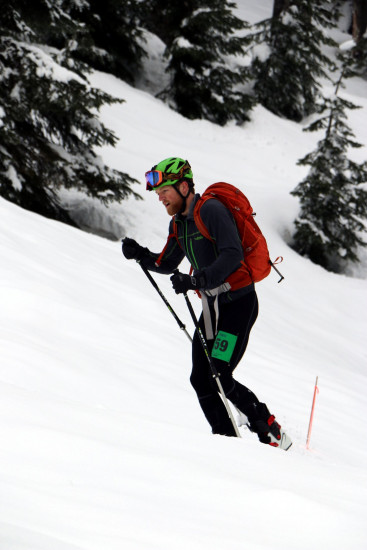 I'll start this by saying this helmet is mediocre. It is outrageously overpriced for the cheap black foam its made of, and it didn't reach the same level of certification as other helmets so it really is not as safe. Additionally, coworkers have cracked the strips of foam between vents through basic use and abuse. On the other hand, it looks pretty sexy and is quite light. For skimo races attach your goggles with zip ties and you have a great skimo helmet as long as you don't hit your head!
Comment on this review:

This is a great light weight helmet but you can not use goggles with it. There is no place to secure your goggle strap at the back to keep the strap from falling down to your neck. When I called Black Diamond to suggest a fastener system to make the use of goggles possible I was basically scolded by a rep there saying the this helmet is not rated for skiing so therefor they had no plans to create a system to make the helmet goggle compatible. So they are very clear that it is not a ski helmet. I attempted to create my own loop on the back to secure my goggles strap but got frustrated. It just will not hold a goggle strap in the back so I sold my helmet.
Comment on this review:

Overall: Five Stars for an absurdly light helmet that doesn’t make you look absurd. Only notable reservation is eyewear fit.

Background on product familiarity: I bought my Vapor helmet in Spring 2013, and have worn it since for lots of training, racing, and “real” touring.

First, the first impressions out of the box: Even compared to almost all the very light bike-style climbing helmet competition, the aptly named Vapor is noticeably lighter. Plus the material is relatively thin on top, and the helmet extends down relatively far on the sides, so the Vapor has no alien-style “crystal dome” effect (especially compared to the downright embarrassing Petzl Sirocco).

The ratcheting adjustment in the back is simple and effective, and ditto for the chin strap. Fit matches up well with the sizing chart.

Second impressions, in use: Since the Vapor comes down a little more than other climbing helmets, some sunglasses with relatively high corners don’t fit well. For ski goggles, I’ve never tried using the headlamp clips, although alternatively, with all the vents to serve as attachment points, jerry rigging would be easy with some combination of zip ties, resort lift ticket holders, and/or velcro straps. And those headlamps clips are removable, so if you ever do remove them (or don’t attach them in the first place), remember to snap them on before any outing where you might need them!

Third impressions, for long-term durability: All bike-style climbing helmets are designed to sacrifice their lives for you. But many reviews of the Vapor question its durability from just being carried about, although I’ve never read of any failures. I did shred the interior padding relatively quickly, but Black Diamond sent me an easily swapped-in replacement.
Reply from Jonathan S 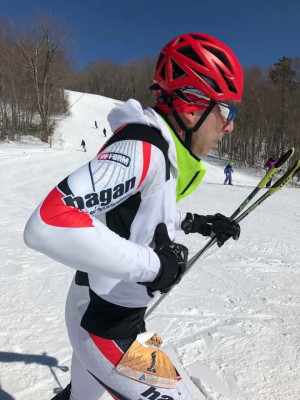 Leaving the ski>skin transition zone at the Bromley VT 2017 skimo race.
Comment on this review:

Light, comfortable, and secure-fastening. What's not to like? Well, to be fair, I'm not 100% sold on the durability and protectiveness it offers. If it wasn't so unwearably fugly, the Petzl d***helmet bests both durability and weight of the Vapor, for which I'm deducting a star. IMO it should extend further down the occipital area for better protection.
Reply from jbo
Hah, yeah the Sirocco is ugly. There is also a question of whether the lack of a polycarbonate shell can increase impact friction to neck-breaking levels. The helmets with slippery shells and interior foam, like bike helmets, are not meant to be durable in the sense that after one accident they need to be replaced, since they are designed to break instead of your head.
Reply from Chris W
Touche! I hadn't considered the slip as it hits a snowy surface - that's definitely a design benefit of a shell.

As for durability, I'm less concerned about what I'm going to be doing AFTER my head hits something -- besides stopping whatever it is I'm doing, and possibly seeking medical attention -- and more concerned about whether I will break the damn thing carting the helmet around. Starting an adventure with a non-intact helmet, or canceling an adventure because of a broken one seems like a major disadvantage to me; one EPP helmets don't share.
Comment on this review:

It would worthwhile investigating whether this helmet would actually be allowed at World Cup level competitions, or any other ones that strictly follow ISMF rules. I have this feeling because few years back ISMF was forbidding helmets with lots of vents like on this one with the reason being that should you end up in an avalanche then snow would fill those big vents and effectively serve as an anchor. This was actually supported/proposed by UIAA standards I believe. Also, I haven't see this helmet on World Cup photos so that's why I am not sure (but I might have missed it).

Anyway, if planning to compete outside of NA with this or any helmet, check with ISMF rules/office if it's approved.
Answer from jbo
Interesting Stano. According to the current ISMF rules doc (14/15), any helmet conforming to UIAA 106 or EN 12492 (climbing) is OK. However it does state that for the 2016/17 season, EN 1077 (skiing) will also be required.
Answer from Stano at SkinTrack
ISMF goes back and forth on lots of gear rules, I guess this is an example. It's all in good efforts but some times makes it confusing for us. :)
Answer this question: