The Elan Ibex 84 Carbon XLT is the antithesis of unforgiving or twitchy carbon skis. A buttery smooth flex-pattern contributes to a drastically fun, worry-free attitude with pleasant flotation in the soft stuff. Modern torsional rigidity and dampening qualities make it a fine performer on firm snow and a ripper on corduroy. If you have been put off by the idea of skiing nervous lightweight skis and instead prioritize the fun-factor, the Elan Ibex Carbon 84 XLT will let you have your cake and eat it, too. Plus, being as light as it is, you don’t have to feel guilty about eating that extra slice. Enjoy!

Update 2019/20: Elan tweaked the highlight colors on the paint job. 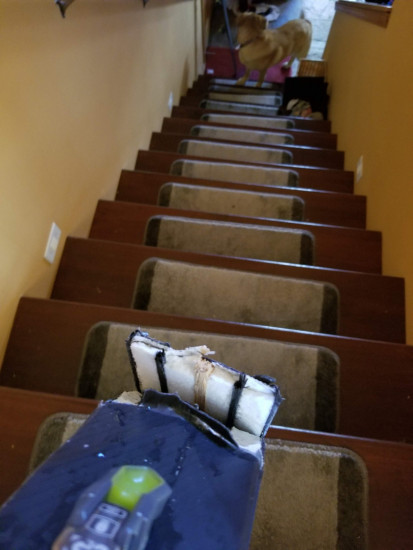 Well, I've been skiing the Elan Ibex Carbon 94 for several years and have had a ton of fun on those. I expected about the same performance and durability with the Ibex Carbon XLT 84. Unfortunately, on an early descent with the skis, I dropped into a narrow, in-bounds chute, did a few jump turns, then promptly snapped the ski.

The ski snapped directly in front of the front binding. The constructing of the ski seems to make this a weak point. The aluminum mounting plate makes the center of the ski stiff and durable, but the core immediately transitions to the foam core with carbon/wood reinforcement tubes. Transitioning abruptly from durable aluminum to the weaker (but lighter) construction materials at one of the most critical points of the ski appears to be a major structural compromise.

To be fair, I am an aggressive 175lbs skier, and the punch-crust jump turn that broke the ski isn't exactly something that most casual touring will entail. However, I would definitely not recommend these skis to anyone looking to ski technical, high-consequence, or remote terrain.

Besides the durability issues, they are wonderful on the uphill, and lovely for groomer descents.
Comment on this review:

Wow. I would not normally write a review after only one day on my fourth day of the season, especially when it’s on piste but this ski was surprisingly good immediately.
The backcountry is a bit thin in CO for a new ski so I rode lifts today to try this ski out. I mounted with Grizzlyski Olympic Tour and attached myself with La Sportiva Scorpius CR and so the set up is relatively light.
It usually takes me a few days on new skis to get the feel for them and feel comfortable charging but these synced with me immediately. There were already soft moguls forming and being a backcountry guy I don’t love moguls but these skis were very forgiving (granted it was soft) and I was taking them at full speed without concerns. Also notable was that my stance was much tighter than normally I’m comfortable with (almost like an east coast skier) and that tells me the ski felt ultra stable for a light soft ski. I expected it to flop around as well but there was only stability.
I look forward to taking this ski to more technical terrain. Really impressed so far.
Thanks for helping me choose this ski (even though you recommended a different model :-))
Comment on this review: 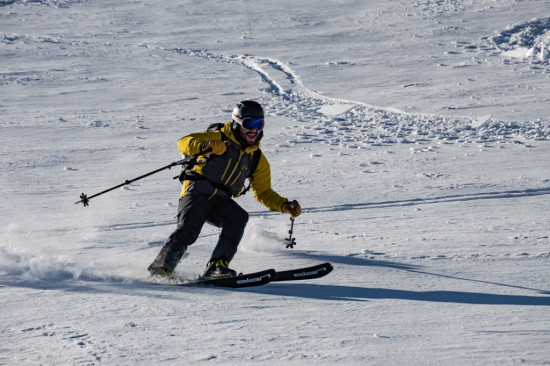 So I had the Ibex Carbon 84 XLT comped to me by an Elan rep after a shop mounting disaster for a different pair of ski-mountaineering oriented skis. My experience thus far has been fairly in line with the description outline above. This skis flexes out pretty soft. When first performing a hand-flex test when I recieved it, I was quite worried. But the Ibex Carbon XLT has proven to be a reliable soft-snow performer. They can carve and slarve with ease in any new snow, corn and fresh groomers. They have a good pop to them and love to make snappy turns. They seem to have strong torsional rigidity despite a softer vertical flex pattern, and under foot lies some sort of additional plate configuration which I imagine is for mounting purposes but also adds a bit of mass along the primary effective edge. Like most lightweight skis, they have a speed limit and require balance and good forward lean to keep the tips down at speed. This all makes making turns *fun*. I keep these skis sharp and use them primarily for touring our local resort for pre-work fitness laps. They excel here. Tip and tail attachment points for skins are a nice bonus and aid here as well. The Ibex isn't a ski I take for too many springtime missions due to its lacking firm/poor-snow performance, but it accompanies me on a good number of my tours given that I tour the resort at least once a week. It also finds itself on a number of my early season missions, where soft snow awaits in limited quantities and a dry ingress means they might spend some time on my back. Even still, I have taken them on a number of longer tours (even an alpine cabin trip last season) where all sorts of conditions were thrown at them and they handled just fine. Pick up the Ibex (it's also listed at a great price here) if this sounds like the ski for you.
Comment on this review:

I'm looking at skiing the Sierra High Route April maybe early May. I have a few options for new skis. I was considering Elan Ibex 84 Carbon XLT Ski, but would like your opinion. I'm 5'11 and 184 lbs. My gear has a 10lbs base weight.
Answer from Tristan M
Hi David,

The Elan Ibex 84 Carbon XLT is a great ski! it has a relatively short turn radius and rolls on edge easily. Additionally, this ski is quite damp, and smooths out deflections from refrozen crud. However, if you are looking for a stiff ski to ski steep lines in variable conditions, I would look for something stiffer!
Answer this question:

I'm looking for a relatively soft-flexing, easy going mountaineering ski to replace my Hagan Ultra 82s, which are too stiff and unforgiving for my mediocre ability level. I don't ski super steeps, just want something light that is friendlier on the downhill. Happy to give up some edge grip for easier turning.

I'm looking at the Ibex 84 Carbon XLT along with the Voile Objective, BD Cirque 84, and Black Crows Ova Freebird. The sale price of last year's Ibex 84 is particularly appealing, what do the experts recommend?
Answer from Julieana
Hey Ben, of the skis you're considering the Voile Objective is going to be the softest, lightest, and easiest one to ski. The Ibex 84 Carbon will have a little more pop and power, as will the BD Cirque. The Ova Freebird will be the heaviest and most aggressive of the bunch. For what you're looking for I would suggest the Voile Objective.
Answer this question: