The Elan Ibex 94 Carbon XLT has a unique feel that everyone should try. A smooth and easy longitudinal flex paired with a hook-free tip and solid torsional stability makes skiing fun again. The relaxed demeanor and Mountain Rocker tip come together in joyous matrimony to provide a lively, surfy feel in powder and corn. However, when the snow gets firm and slope angle increases, the torsional stability ensures plenty of grip to get you down safely. It’s just good, old-fashioned fun. The Ibex 94 Carbon XLT is Elan’s ultralight touring ski that’s perfect for surfing low-density powder in the Rockies, feeding on corn in the Sierra, or anything in between.

Update 2019/20: Elan slighly updated the graphics on this ski. 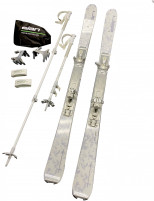 Would appreciate a comparison of the Elan Ibex 94 Carbon XLT versus Voile Hyper V6.

Pros: phenomenally easy turning, surfy powder ski, unique, excellent hybrid rocker. Top sheet, non-glossy texture and mostly white color for snow shedding, not perfect but best in class.
Cons: too wide underfoot for practical touring ease/taste with my boots Atomic Backlands. 100 underfoot was driving my leg rather than the opposite while side hilling/skinning.

Invested at Skimo in shell punching and Intuition liners for the Atomic Backlands. Fit, weight, added warmth, and improved downhill performance as good as the compromise gets for my needs, BC pow touring in the Tetons. Not inclined to buy up to heavier, beefier boots to drive a wider ski. Skis in quiver:

The Elan Ibex 94 Carbon XLT is as wide underfoot or as heavy as I dare go given my boots and 50/50 touring/skiing style, "it's not all about the down." Don't believe the top sheet bevel would appreciably help snow shedding, and certain the black color would be a detriment especially as our winters get warmer.

Guesstimating the Elan Ibex 94 Carbon XLT and Voile Hyper V6 are similar. Particularly interested in any insights as to differences in longitudinal flex, tip/tail rocker, recommended mounting point, and effects on powder skiing performance. The Voile Hyper V6 forward mounting point is very noticeable making it "ski short", owned the 183cm. In the Elan Ibex 94 Carbon XLT I'd get the 177cm.

Thanks, Eric
Answer from TSB
Hey Eric, thanks for the detailed question and personal skier info! Given your "cons" list for the Hyper V6 I'd almost be inclined to recommend you move down to a ski in the 85mm-underfoot range, but it sounds like you already have that quiver slot covered. For the skis in the 95mm range, the Ibex 94 is definitely a standout. Not quite as surfy as a V6, the Ibex is a bit nicer as a carving ski and better on edge when the going gets firm. In general, it's a fairly undemanding ride and your Backlands would pair well with it. Another option you might consider is the Voile Hyper Vector, which has a slightly more buttoned-up personality than the V6 but retains some of those classic Voile characteristics (plentiful rocker, easy turning in all conditions, medium-soft flex). The Vector has a longer effective edge than the V6 which may make skinning a little easier on those steep skinners up Edelweiss and Mt. Taylor.
Answer this question:

I am wondering what the Ibex 94 has for sidewall construction. Sounds like a nice ski (I have a pair of Ripsticks), but skiing in the East and Europe, I need the edge hold only full sidewalls can offer.

Thanks
Answer from TSB
Hey George, noting that we are talking the "carbon XLT" version of the Ibex (not the standard version), we wouldn't recommend the Ibex as a carving ski on hard snow -- it's flexier and more playful, and yes, utilizes cap construction rather than sidewall. If you wanted a versatile mid-fat ski that won't bat an eye at scratching down some blue ice, I would check out the Blizzard Zero G 95 or Ski Trab Mistico.
Answer this question:

I keep hearing complaints about the black topsheet--people say it causes snow to stick to the ski on the way up. That seems a bit silly to me, but is it a real concern?
Answer from jbo
Hi Eric, I haven't noticed much of an issue on mine. It's nothing some spray can't fix anyhow.
Answer this question: