The 84 is the mountaineering specialty ski of the Movement Alp Tracks line. Using the same advanced construction techniques found in the 94, 100, and 106, this steep skiing weapon is built to perform on the up and the down. Amazingly lightweight yet stable, the Alp Tracks 84 is a ski you can rely on to travel far and get back home. For edge hold on the steeps, Movement added an ABS shock-absorbing sidewall and variable thickness edges. Vibrations are reduced with a rubber & fiberglass mixture in the tip so you can feel confident when turns matter. The ski has the same shape and profile as the Vertex-X, which was named “Touring Ski of the Year” in Italy. The flat-ish spots in the tip and tail are helpful in the steeps, and the light rocker and gently curved tail seem to do what you want. This version saves a little weight versus the X-version, due to the intensive squeezing process used to finish the skis. The manual steps are time consuming and thus the skis are only being made in a Limited Edition (LT) run. This ski rocks.

I bought a pair of these with steep objectives in mind. They work beautifully for this application. Many people shopping here would probably prefer a skinnier ski for steeps, but the extra width is confidence inspiring in less than perfect conditions.

The long turn radius (18m in my 169cm) means there's a large amount of edge contact with the slope, a plus in the steeps. I wish that they had a full length sidewall, but the micro sidewall in the mid-section does its job well. I also wish they were slightly stiffer, but for skiing anything other than jump turns the flexibility profile is perfect. I cut a tip notch in the nose, a fairly easy process. Though the edges run fully around the nose so a carbide cutting edge is likely necessary.

They have left a fair amount of base material to work with, so in reality in comparison with other mid-fat skis these should be lighter. In my experience dynastar, ski trab and dynafit grind the bases down much more than these. This means there is a lower likelihood of core shots as well as a greater number of possible base grinds.
Comment on this review:

What are the main differences between this ski and the Vertex-X?
Answer from Teddy Young
Hey Paul, they're very similar! Same shape and profile, slightly different construction. The Alp Tracks LT 84 is a little lighter weight and is full Karuba wood, while the Vertex-X was Paulownia + Poplar wood.

Here's a link to compare the two: Alp Tracks LT 84 vs. Vertex-X
Answer from Paul S
thank you for your help
Answer this question: 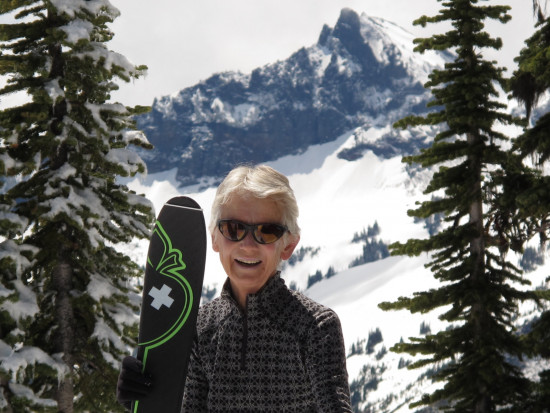 Bought these for my wife's 75th birthday, here's her review: First day out, very happy with them. Skied extremely well; no effort. Just go. Very light weight and good looking too! Matches the green on my TLT5 boots.
Comment on this review:

I've been on these skis the last 7 days. These are a dang riot to ski. I've been in variable, dust on crust, and 10 inches of fresh today. These skis handled it all quite well. I've paired them with fischer travers carbon and the duo is light in the skintrack and ski fantastic. They are a snappy ski that loves to turn, a fair amount of tip and tail rocker makes turns easy to initiate in chunky stuff and keeps tips from diving in deeper snow. They get a little squirrely at high speed (the 169s) but nothing out of the ordinary for a short ski. The hybrid sidewall is nice, though I have already chipped part of the cap section. These skis will see a fair bit of rock in spring mountaineering so that does worry me a bit, but skis are meant to be skied. Overall I'm super happy with this ski, and Skimo co is an awesome group to work with. They mounted these and had them on my door step in two days. Knowledgable company with great attention to detail, I can't emphasize enough how smooth and easy they are to work with. Keep up the great work.
Comment on this review:

I've been holding off on writing this review because I feel like I'm jumping the gun on a ski I haven't been on a whole lot...but what the heck, I'm a fan. I've skied the Alp Tracks 84 in the 177 length almost a dozen days and 40k+, enough that I'm re-waxing a second time and contemplating buying a wider pair of Alp Tracks (the ski lust is strong right now), so I can claim at least a bit of familiarity. I'll check back in once I have more vertical on them and a full spring season, but I can't imagine too much changing.

My first day out on these involved 3-4" of fluff over some refrozen chunky stuff, and then three days later on sun-baked goop and shaded crud -- a pretty solid pair of tests for a true one-kilo ski. In soft snow the Alp Tracks handles spoony turns in the trees with enough float in the deeper drifts, on corn-ish snow it can carve, and on hard ground the stiffer tail coupled with a mid-stiff overall flex just rocks. The real test came on a day when I was expecting to ski chalk and wind-board but ended up skiing drifted snow over breakable crust, in which the Alp Tracks was snappy and quick enough to avoid any major wrecks. I haven't taken them on a full-on mission yet, but I'd be happy taking this ski rather than a typical 75mm mountaineering rig.

Coming from a background of heavier (though not exactly heavy) telemark skis, I've struggled to find a lightweight, versatile low/mid-fat ski that inspires confidence when edging New England hardpack, but handles softer snow well too. Seems like most light skis, in their own way, can edge frozen corn or ride out crud, but managing both, that's the tough part. Case in point, I was on the Voile Obective (82mmx171cm) last spring and earlier this winter -- the Alp Tracks is miles better than the Objective in hard-snow performance (sizing up to 177 didn't hurt either!), much stiffer and more precise, and avoids the uneasy rocker-throw effect. On the higher end of 80-90mm spectrum, I've been pretty happy skiing powder and crud on 182cm Cho Oyus (89mm), but the Alp Tracks loses little in powder performance to the Cho's and gains a lot on breakable crust and mank because it's stiffer and less curvy in sidecut. And the Alp Tracks is 200g lighter.

Not only do I love the ski, but SkimoCo did a great job fine-tuning my ski choice (Eric steered me away from the 94 as a more "sidecut"-oriented profile and toward the technical skiing of the 84), mounted up the skis with Plum 170's at -0.5cm from boot center, and got them shipped out to the East Coast in no time flat. A five-star ski from a five-star shop!
Comment on this review:

Spirit guides of SkimoCo -- how would you compare this ski in a 177cm length to a 178 Voile Objective? I've been skiing the 171cm Objective as a long-tour option for two seasons now and considering getting it in the 178, but I've been a little disappointed with its hard snow performance. Would the Alp Tracks take refrozen mank better than the Objective? Or would it be a little less versatile, and more of a quiver ski? Thanks in advance, dudes!
Answer from Nate
Hi TSB, the two skis you are comparing have quite a bit in common. They are similar in flex, dimension, and not too far off in overall shape.

If you are looking for enhanced hard snow performance over the Objective, but want a ski that's got a similar general feel and dimension, the Alp Tracks 84 is a solid choice.
Answer from TSB
Thanks Nate, that's exactly the info I was looking for.
Answer this question: