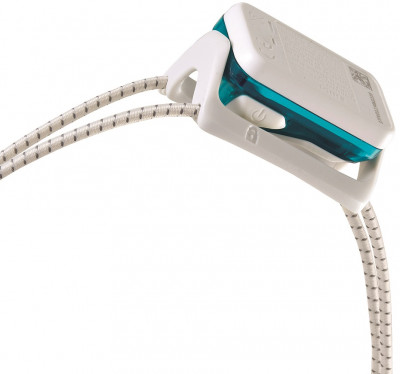 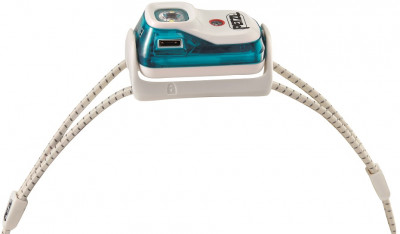 The Petzl Bindi puts the power of 200 lumens in the palm of your hand. Actually make that around your head, since it’s a headlamp. Or neck, because it’s also a necklace? That’s right, you can wear the Bindi around your neck and still have it point out and illuminate your general direction. With an ultralight build, the Bindi is the perfect backup or emergency headlamp. But with the lighting power and 50-hour battery life, it can also be your main source on dawn patrols. Throw it in your pack and never take it out. Except of course when you need it. No more excuses for being benighted and unprepared.

I love it, when it’s charged… this is a great headlamp for urban running and quick adventures, but the 2 hour on high capacity is a little frustrating as it forces a recharge nearly daily.
The swivel is also a little loose especially when skiing crud, so hopefully new versions add perhaps adjustability there or at least some more resistance.
Comment on this review:

Love this thing. Super light, bright enough in a pinch. I use it primarily for road running and as a backup light. It rather disappears when you wear it and, being rechargeable, always starts out with max brightness unlike headlamps that use standard batteries. The bottom portion of the headlamp is clear and you get some light bleed that can reflect on the lenses of your glasses. Looking forward to seeing where Petzl takes things in the years ahead.
Comment on this review:

This use to be my go to headlamp, and while I still own one and keep for an UL emergency option, I've found what I consider critical flaws to where I no longer trust it. Firstly, my primary usage one died within a year. It will register a charge (lights up on charger) but the light wont function (turn on at all). The other flaw I think is the on off button. You can flip the light so it's kind of inside out so that the on off button is protected so it won't accidentally turn on in your pack as easily, but the fact that you cant lock the headlamp off for when it is jammed in a pack is just dangerous especially if it is supposed to be an emergency or rare use item.

Otherwise it gets 3 stars because it's weight/size/brightness is amazing. It if had a locking on/off and it didn't die after a year, it would be a 5 star no brainer as at accidentally benighted type/emergency headlamp.
Reply from Travis
If you hold the power button until the light blinks it will lock the headlamp. You might now this, but I didn’t until I read the directions.
Comment on this review:

Battery life on high is worrying, doesn't last long enough to start and end in the dark (2 hours). A great emergency headlamp to leave in the pack and never take out. I packs a bright enough 200lumens to ski out with, definitely more of a real headlamp than the old petzl e-lites. Another plus is that it is light enough to run with, doesn't bounce off you head.

The light "locks" so that it can't be turned on in the pack by rotating so that the button is under the plastic casing. This feature works well, not as aggravating as other button click sequence lockouts.

I'm a huge fan of the the rechargeable system, never wondering if the batteries are half dead, and less in the landfill.
Comment on this review:

For many years now, my emergency headlamp model has been getting both lighter in weight and brighter in lumens.
I suspect the Bindi will end this trend, since at barely over an ounce it's nearly weighless, and since at 200 lumens an emergency light source doesn't need to be any brighter.
Extra bonus points for a locked mode that is enabled simply by holding down the main switch for four seconds, and then the Bindi won't actually come on accidentally (unless the switch is held down for another four seconds) while forgotten in the deep recesses of your pack until you remove it months later to find the battery drained (a fear I have of all such neatly stowed-away emergency gear).
And for any application, the bungee cord attachment system is both stable and comfortable, while the swivel angle adjustment is helpful. Plus the included USB cord can make your household collection of those become even more impressive.
However, I'd restrict its useage only to emergency purposes. For a dawn patrol, the 200 lumens lasts only two hours, and then the recharge time is four hours. And the 36m spec range is relatively short. Also, the very small switch would be tricky to operate with cold numb fingers inside bulky handwear, and the sequencing can be a bit confusing between the three-level white lighting vs red lighting vs red strobe vs off.
But those are all quibbles for an application as a primary expected lightsource. By contrast, as a just-in-case item to bring on long tours that might get even longer in a bad way, this is a must-have headlamp.
Comment on this review: