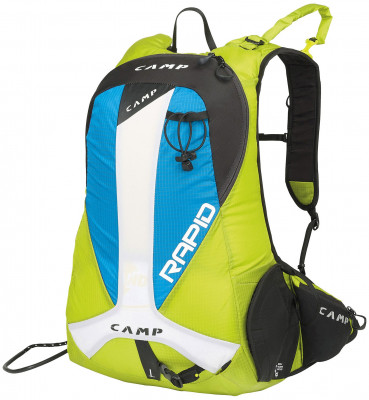 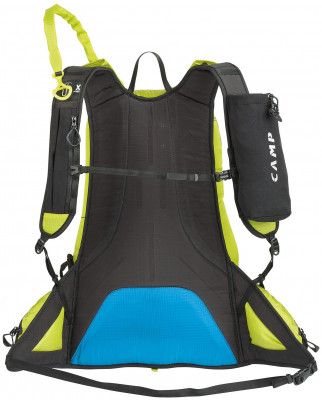 The Rapid is the brother of the world-renowned Rapid Racing pack; this version is built with a higher emphasis on day-to-day use outside of a race course. The Rapid is an excellent pack for everything from racing to long days accessing technical lines. A nifty velcro crampon pouch provides easy access to crampons (camera, overmitts, water bottle, etc) without removing the pack. EZ Op Buckles on the hip belt and sternum strap allow one-handed on-off use even with gloves. Padded shoulder straps and back panels on the Rapid will make light work of coaxing you into the classic one-liner "just one more run."

Update 2021/22: Holy smokes what didn’t get updated on this pack? CAMP decided to alter the overall fit for a slenderer and more profiled fit. An updated crampon pouch with the help of magnets to help close the flap allows for easy access without taking off the pack, and CAMP also included an updated ice axe holder. Another major update is the dedicated avalanche tool pocket and a bottle holder on the shoulder strap. 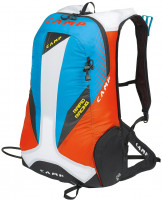 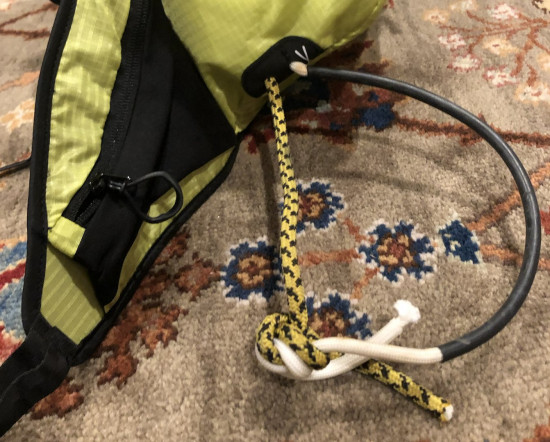 Maybe my favorite thing on Skimo's website is that the two reviews on a skimo race pack are from splitboarders haha. #splitboardforlife

I also got the newer Lime Punch version to a) get faster and b) prep and race skimo races. I can say it is amazing! Fits everything I need it to. I have a pretty big shovel and probe (not bought at Skimo) and they fit great. I also pack an extra set of big mitts, extra layer, a hat, and a few other essentials. Could fit another layer in there but it would be tight.

Plus, unbelievably light! I was using a Jones pack before and this is truly noticeably lighter.

The trick though is that it has to rest on your lower puck or it just falls through the loop and is a huge pain. Skiers have the big heel piece to rest it on. That being said, I'm not certain this would work with the Phantoms. My hunch is no.

All in all, incredible pack from Skimo. Shout out to Skimo for nailing the customer service once again.
Reply from Todd S 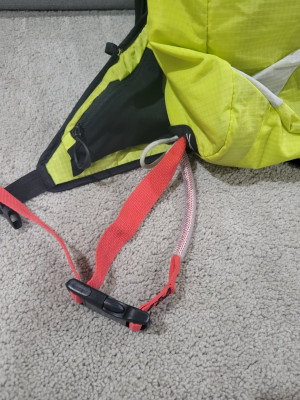 Thought I'd show my ski loop mod too! As noted in my review, I replaced the ski loop with nylon webbing and a buckle - though just making it a bit longer is a great idea. I also added a small loop of elastic cord in the same place - handy if I want to stow my poles - use that loop and the x-press carry on the shoulder and it's pretty secure.
Comment on this review:

I was looking for a race pack for splitboarding - so if you're a splitboarder - this review is for you!

I attended a skimo race for the first time this year and got intrigued by the slick transitions of the well-designed skimo packs that racers had. Mainly, the idea was to find a pack that would allow transitions without taking it off. This is the one I landed on after e-mailing with the skimo.co crew several times and looking at several different packs.

I was looking for two specific features for a splitboard race pack: 1) a ski carry system that would work with a regular splitboard (as the tail rise means they don't slot into ski loops easily); and 2) an big and accessible crampon box for storing downhill hardboot bindings on the up and skins on the way down.

With respect to the first one, splitboarders need to know that by default this pack will NOT fit a typical splitboard - it requires some minor modification. BUT - the way this pack does the ski loops - it is easily modifiable with just removing a few stitches. The loop is simply cord slotted into two holes in a reinforced patch on the pack. One end is knotted, and the other end is stitched in. To make the ski loop compatible with a splitboard, I simply cut the stitched in end and unknotted the other end and removed the cord and replaced it with some nylon webbing with a buckle. I'm happy to post some pictures, but I'm hesitant to post pics of a modified pack.

For the second piece, the crampon box - I asked the skimo.co crew about which packs had the biggest crampon boxes and they steered me to the CAMP packs. I have Spark Dyno DH hardboot bindings and I can confirm that they fit in the crampon box on this pack. The opening not so huge that I can put both bindings in with one hand, but it's pretty easy and once inside the pack, there's plenty of room. I would guess that there's enough room that Phantoms or any other hard boot bindings would also fit, but I can't verify. I'd also say - even if you don't have hard boots - the crampon box is super handy - I put my skins in there without needing to take the pack off.

So - with both of those issues solved, this is the right pack for me and I'll look forward to doing an uphill race or two with this pack next year - but in the meantime, this pack will double as a slick light volcano season pack for me.

The last thing I can mention is why other packs I tried didn't work for me (again, as a splitboarder).

CAMP Rapid Racing - This one would work too, but I went with the slightly heavier Rapid pack because it has a bottle pocket on the shoulder strap, and the shoulder wrap-around ski carry loop felt a bit more secure for a splitboard compared to a hook. I also like the hip belt pockets on the Rapid pack for regular touring (snacks and chapstick etc).

CAMP Raptor - This was basically a bigger day touring pack that looks like it'd be great, except I already had a backpack I like (and is an avy pack) for that type of touring. One thing to note on the Raptor is that the ski loop is not stitched into the pack - it's held by knots on both ends - so if you wanted to try changing out the ski loop without cutting any stitches or modifying the pack in any permanent way, the Raptor might be one to try. Finally, the crampon box is zippered, which is great for touring, but again I was looking for super fast and light. From what I could tell, the dimensions of the crampon box openings were identical to the Rapid packs.
Comment on this review:

How does the x-press/tubular rewind ski carry upper attachment work? I have an older Camp race pack with the metal hook that works great with skis that aren't strapped together, but I can't tell from the photos how this new system holds the skis.
Answer from Jeff
Hello Russ,
Instead of clipping to the ski, the cord wraps around the ski and the clip on the cord connects to the metal clip on the shoulder strap.
Answer this question:

Does this pack have any helmet carrying options?
Answer from Ian C
Hi Mel, no specific helmet carry on these. The Camp Ski Raptor 20L has a helmet carry if you wanted a slightly more fully featured pack!
Answer this question:

Any updates about the availability of the 2021-2022 version of this pack? Looks ideal, but if it won't be available, the Raptor 20 looks like another good option.
Answer from Zak M
Hey Jim, currently we have a tentative ship date for 11/1/2021. I will sign you up for an email notification as well that will let you know right when we receive them. The CAMP Ski Raptor 20 Pack is also looking promising as a pretty amazing pack as well but with a touch more touring specific features. Let us know if you have any other questions!
Answer this question:

Howdy! Any thoughts on when the 21/22 version might be available? The updates seem worth it!
Answer from Zak M
Hey Dennis, most of our new Camp products will be arriving mid-late September. I took the liberty of signing you up for an email notification that will alert you once we receive the new packs!
Answer from Dennis K
Awesome! Thank you very much.
Answer this question:

What size ski can be fit into the loop? I'm looking for something that can carry any of my boards.
Answer from Jeff
Kam, You can comfortably slip in a 105mm waist ski in there. Maybe more.
Answer this question: