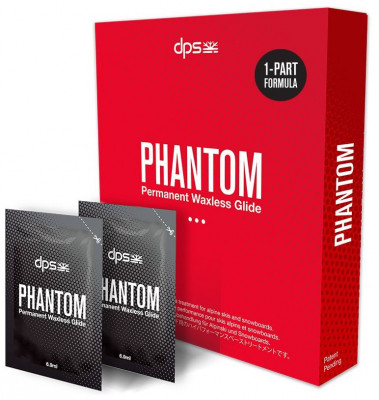 One small step for a skier, one giant leap for skier-kind! DPS has improved upon the impressive Phantom "waxless" base treatment by chopping the process down to one single step. That makes it twice as easy to apply which is exactly half as much work. Even those of us that are too lazy to wax can make it happen! If you're looking for good glide and more consistent performance from your bases, then adding a permanent Phantom treatment is a step you shouldn't skip. Labeled as "DIY" you can also have the pros at Skimo put your bases through the paces of the Phantom installation to guarantee the end product is as amazing as the hype suggests. No doubt you will appreciate the extra glide and free movement underfoot in that steep couloir or open meadow as you slay powder and crush corn. For a better all-around winter experience, take the time to put the DPS Phantom Permanent Waxless Glide on your skis or board.

I did the application process myself, got lucky with a sunny day and went for it. Pretty straighforward, no problems there. The next day I tried sticking my skins on there- absolutely no grip. I briefly panicked, then consulted the DPS website and found that they recommend skiing a few laps on them to buff off the surface to get the best adhesion from skins. After two hours of warm spring skiing, the skins stuck just fine. Also, performance improved vastly over the course of the first half dozen laps, so I’d recommend not trying to tour right away- definitely get chair laps, or do a better job buffing by hand than I did. It would take a few days of touring to get them feeling fast. Performance has held up well since.
Comment on this review:

The most common question we get about the Phantom treatment is whether or not it actually does anything. Having Phantomed every ski in my quiver (except the buster rock skis), I can definitively say that it makes a big difference. While the Phantom itself isn't exceptionally fast, it is a whole lot better than a dry base. Though I do use liquid wax on my skis, I have not at any point this or last season though "gee I need to re-wax these skis" because the Phantom keeps them moving long after all the wax has been stripped off.
While the improved wax-less performance is very nice, I have found that the biggest boon of the Phantom is the CONSISTENCY of the ride. Going from cold snow to warm, or ice to nearly-slush, the Phantom is far more consistent over changing snow types. Especially in the spring when the snow is either heavy or frozen, I don't feel any "lurching" if the snow under my skis changes. As a teleskier who previously broke a collarbone by hitting a patch of wet snow, the ability of my skis to hold speed moving into sticky snow is utterly invaluable, and it also makes the ride-out to the car on mushy snow a LOT more enjoyable. These days, I hardly worry about wet snow as the Phantom immensely smooths the transition and reduces the drag on the base by an honestly impressive amount. After 2 winters of skiing on Phantomed skis, I will be Phantoming every new pair of skis I henceforth acquire for the quality-of-life improvements to how the skis ride.
Though I can't say conclusively whether DPS's claim that the Phantom also strengthens the base material, my skis do seem less scratched at the end of the season than they typically are, but there are a lot a factors that could be responsible for that.
Comment on this review: