When it comes to the finer things in life, we coarse Americans must look to Italy for subtlety and refinement. When it comes to skis, we look to the Trabucchi family, who have been building skis in Bormio, Italy, at the entrance to the famed Stelvio National Park, since 1946. The Trabucchis don't have to go far to test and play with their creations -- or to find names for their many products. Years of testing and tweaking came to fruition last year with the release of the Maestro.2 and Magico.2, which updated Ski Trab's classic-mountaineering and classic-touring platforms to float better in powder and turn with ease in all snow conditions. Now the .2 tech that had us hooting and hollering from October shark-dodging to April sun-crust trickles down to the Stelvio 85, the Trabucchis' entry into the competitive category of one-ski-to-rule-them-all. We can thank Trab's Liwood Air core for the lower price point and damp feel; the mating of the wood core with a glass/basalt cap will bring years and years of durability. The construction just gets more impressive from there, with fourteen layers of material including the all-important L. Fraxinus ash wood for predictable damping, and hand-laid carbon fiber for energy and directional stiffness, not to mention the nicest bases and edges in the industry. If you've rollicked down a couloir with Ski Trab's magical skis on your feet, you know that the best just got better. If you haven't...well, now's your time to try. 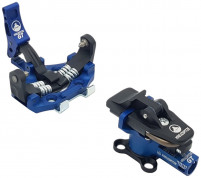 I picked these skis up a few weeks ago and have not been disappointed yet! I bought these as my new central ski in my quiver and they’re living up to that title.

The first couple of days I skied the Stelvio’s was in 10 inches of fresh. I was pleasantly surprised how well these skied in deeper snow. Perhaps on extra deep days I’ll pull out something a little fatter, but 80% of pow days these will do the job.

They also are stable, confident, and damp enough for variable conditions. I feel confident on steep, hard snow and know the long effective edge will stay engaged as long as I need it.

I have noticed that I have to stay on my game with these skis—if I lose form or get sloppy, they’ll take control. I’d say these are best suited for aggressive skiers.

The proprietary Ski Trab skin system with the swallowtail tail clip is awesome—quick to rip and secure skins all day long.

Looking at two (statistically) similar skis ... The Blizzard Zero G 85 (great price if you like yellow!) and the Trab Stelvio 85. As you have skied both of these, I would be interested in your thoughts.

Eastern US skier; however, I usually do one hut-to-hut trip in Europe each winter. Also, I have an old pair of Dynafit Grand Tetons that I used for a trip to Japan, so I don't need a 'floater' for powder. Instead, I need something that is light, easy to kick turn, and holds well on ice. I would also like something that is fun to ski ... I had a pair of 178 Zero G 95's at one time, but I sold them as I felt them long and kind of uninspiring on the downhill, although they had great edge hold.

My first pair of AT skis were a pair of Trab FreeRano's with the 'Duo-Tip.' Way past there prime (I ski the East after all), I can't bear to can them, as they have some of that Trab magic.

Thoughts on my dilemma?

The Blizzard Zero G 85 is a great ski for spring or someone that is looking to shave some grams! It is quite stiff, and will have no issues holding an edge on those firm east coast days. However, it will surprise you with how well it floats in softer and fluffier conditions. That being said, it is a less forgiving ski.

In contrast, the Stelvio 85 has a softer tip, and is relatively forgiving. It will not hold an edge quite as well in the firm, but it will be damper in more variable conditions.

If you have any further questions or would like to chat about some other ski options, reach out to us at help@skimo.co!
Answer this question:

Hello. Just want to ask which length you recommend for me? (body weight: 68 kg / body height: 182 cm). I'm quite unsure. My feelings tell me, 178 feels a bit too long for me (when mounted on a backpack) but i'm a bit worried going with the 171 and loosing too much stability in the descent. On the other hand, i'm a light skier. So, will it be ok, to go for the shorter (and lighter) one? thx!
Answer from Tristan M
Hi Gerhard,

The Ski Trab Stelio is an awesome ski! It has a long turn radius, and very long effective edge. It will definitely have some stability at speed, and will hold an edge well when you find yourself in an icy couloir. Based on your dimensions, you could go either way in length.

The 178cm length will provide more float and stability at speed. If you are someone that enjoys a fast ski with a long turn radius, then this is the length for you!

If you would like something with more maneuverability at a lighter weight, I would lean towards the 171cm length. If you would like to chat in more detail, reach out to us at help@skimo.co!
Answer this question:

Hi! I'm quite a lightweight skier (68 kg / bodyheight: 182 cm). Will the new Trab Stevio 85 be too stiff for me or would you recommend another moedell? thx
Answer from Tim
Hi Gerhard,
The Stelvio would be a great option! It is a bit damper then it's full carbon siblings in the Ski Trab lineup, giving it a nice rounded feel and making it very adaptable. Other ski to check out, that may also be along the same line, is the Atomic Backland UL 85.
Tim
Answer this question:

So is this essentially the gara powercup to gara world cup relationship between the stelvio and the magico? Basically just a swapped core that makes this slightly stiffer and damper and probably better downhill performance thanks to some extra grams as well?
Answer from Zak M
Hey Anthony, I'd say you're pretty spot on with that statement between the two sets of skis. The comparison would be more associated between the Aramid honeycomb core in the Gara World Cup and Magico verse the Liwood Airflex Core in the Gara Powercup and Stelvio.
Answer this question: