Kohla mohair is fast and functional. It’s affixed to your skis with some of the tackiest glue around, especially right out of the box. Or in the case, off the roll. Purchase the 100% mohair skins by the centimeter and we’ll cut some off a big roll and send it you. The next person will get some off a smaller roll, but it will still be good mohair. It comes with a thin sheathing on the back to keep the glue clean. The skins are woven with the Kohla logo, lightweight backing, and the sweat of Austrians. This is the same formula used in precut kits for skis such as the Hagan Cirrus. Just cheaper.

ORDERING NOTE: These skins are sold by the centimeter (cm), meaning you should type in the Qty field the length (in cm) of skin you want for one ski “times two” for a PAIR. Unless you are making a backup skin, then just times it by one.

Hey, hope you're all doing well. It looks like you only have enough of this left for one skin? Can you notify me when you get some more in stock--or another similar brand of 130mm pure mohair skin? Thanks as always.
Answer from TSB
Hey Josh, thanks for reaching out! We are running low on the Kohla Mohair plush but may not get a re-stock until next fall. Your best bet for now might be the 120mm Ski Trab mohair roll.
Answer this question:

Are these glued wall to wall.....or is there a non-sticky strip down the middle like what BD does on some of their skins? In other words, can this material be split down the middle to make 2 roughly 67mm wide pieces?
Answer from TSB
Hey Brian, no strip down the middle on this roll, but you should be able to cut the skin in half with a pair of sharp scissors and some attentive measuring! We wish you luck with whatever franken-skin endeavor you are aiming to do :-)
Answer this question:

How does this skin compare to the following Pomoca skin in terms of glue (both glue-on-glue and glue-on-skin), weight, packability (both stiffness and thickness)? I'm guessing this has comparable glide?
https://skimo.co/pomoca-race-roll
Answer from jbo
Hi Brian, the glue is more tacky, especially out of the box. It moderates over time. It's similar in the other qualities you mention, maybe just a tad thicker/heavier with slightly longer hairs. Great glide, slightly more durable than the race formula.
Answer this question:

I was considering getting skins for my two scaled touring skis until I saw comment regarding glue sticking in the scales. Could you elaborate on this issue?
Answer from Trace Leches
Hey Will! I'm definitely not the authority to contact with questions about scaled skis so I'll do my best with input. I can definitely see glue getting stuck in the scales of skis, but only as long as the glue isn't working as well as it should. Ideally you should peel a skin off of your ski and nothing should be left on the base, even in the scales. If the conditions aren't working in your favor (warm, humid day with old skins on some bone dry bases with no wax on them) then chances are pretty good you'll get glue in the scales, but also all over the rest of the base. I'd say as long as you take care of the skins (keep them clean, make sure the glue is in top working order, store them appropriately, etc) and your skis are waxed appropriately then you could definitely minimize the issues with glue actually sticking to the base material. If it does end up sticking and you have a thick coat of wax on the ski, the glue's sticking to the wax, not the base material so you can carefully scrape it all off and try again!
Answer this question:

I have Sporten hunter skis that are about 180 mm wide and 4 feet long. It already has skins glued to the center of the skis what the skins are narrow to get any traction. Is 120mm the widest you have?
How long are the skins?
How stiff are these skins for climbing?
Answer from Trace Leches
Hey Mike! Nice skis! Yup, unfortunately 120mm is the widest I have in these skins. I have a wider skin here but 125mm is the widest that we have from them. Off the roll, these skins are as long as you want (until we run out)! Not sure exactly what you mean by "stiff for climbing" but the glide is pretty impressive and the grip is even more impressive! Let me know if you have any further questions!
Answer from Mike D 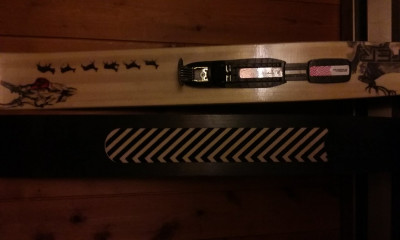 Trace, Thank You for replying!
So I was wrong with dimensions of my skis, So my ski are 140mm wide, the skins that are attached to the ski are 75mm x 500 mm. I was struggling skinning up hills with not much grip, while on the flat I was was fine. Would a 128mm x 500mm really improve ascending pack xc trails? What is the link to the 128mm skins. Do you have about 1000mm of that type?
Answer from Mike D
Which skins would work better? Black Diamond glidelite, Black Diamond nylon, or the Kohla skins?
Will the sticky glue on the skins attach over my skis?
Answer from Trace Leches
Hey Mike! Oh nice, actually that 140mm width helps a lot in this case and the 125mm would do much better than the 75mm width skins.

Keep in mind that I'm assuming a lot here, but based on my experience and weighing that against what I'm seeing in that picture is that the reason you're slipping while climbing anything steep is because of the lack of skin width. If your knee and ankle aren't totally vertical over the ski (to be fair it's not really user error as that's a pretty tough feat to accomplish) and weighting the majority of that skin patch down against the snow, your weight is pressing into the edges which lifts the skin material off the snow and reduces the usable contact patch pretty quickly, hence the slippage. If your knee and ankle aren't perfectly vertical over the skin material then you're basically just edging straight down the fall line which as you've found isn't a super grippy way to go uphill.

I think that some full width skins would help a lot, but length also helps a ton. Getting a full coverage skin that runs the entire length of the ski but more importantly the entire width of the ski would be a lifesaver. It sounds like the pre-installed skins are great for flats, so you could just throw the new skins on for steep climbs. For that 140mm width though I don't have any material off the roll, though I do have some kits available in that width.

Nylon is cool, but a bit overkill unless you're planning on an Antarctic adventure or something in REALLY frigid temps. The Glidelite is my favorite in this case, especially because we actually have the kits available and ready to go. Find the STS Kit 140mm here. The kits have a stripe of tape running down the center of the glue to counteract the insanely sticky glue but in this case that stripe will probably work more in favor of preserving your existing skin material than anything.
Answer from Mike D
Thank for the advice. My skis are 120 cm long, i dont want to purchase a kit and then have to cut them to fit. So from your spools what are the widest skins. And how much are they?
Answer from Trace Leches
Hey Mike. Widest I have is the BD Glidelite Mix and Ascension at 125mm wide.
Answer this question:

Glue very tenacious. Glue to Glue a very bad idea. I use a scrap of SilNylon fabric half the length of the skin to prevent glue to Glue contact. SilNylon is a bit too slippery. Uncoated ripstop might be better
Comment on this review:

Can you explain the pricing and if the 135mm will fit on a splitboard? Are tip/tail connectors extra?
Thanks
Answer from jbo
Hi Jordan, pricing is per centimeter and is just the material. You also need tips and optionally tails. 135 may be sufficient to cover your snowboard, but you'd have to measure the width of your board to be sure.
Answer this question: 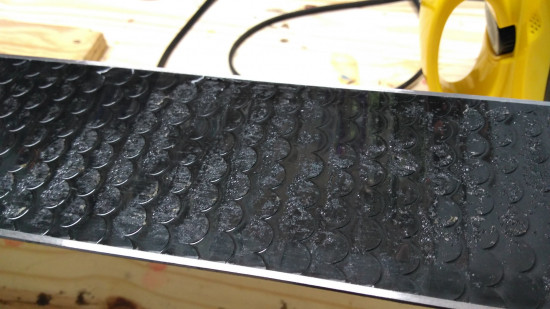 While I've used the narrower race roll on a couple different skis without problem, I used skins cut from this larger roll today on an Objective BC ski. Despite having previously used scaled skis with skins and having friends who do the same, I learned to not use these skins with a scaled ski. The glue on the skin transfers onto the scale base material making your life suck. The glue doesn't stick to the normal PTex base, just the material the scaled area is made from.

I had a choice of ski with skins on or have a wad of snow under each foot that was sticking to the leftover glue. Thankfully I'm nursing an injury and had a bail plan to just descend a summer time access road so skins on was not a big deal. Now to clean up this mess and make a new pair of skins with something else.
Reply to this comment:

Are these really 110mm and 130mm width of this skin roll? That's freaking monstrous, Skimo the Pow skis!
Answer from jbo
Hi Jeff, you got it!
Answer this question:

Hi Jason, what fittings do you recommend for use with this skin ? Thanks
Answer from jbo
Hi Tim, you can attach any tips and optionally tails to this material. We usually select based on your ski, many of which have unique attachment systems.
Answer this question: