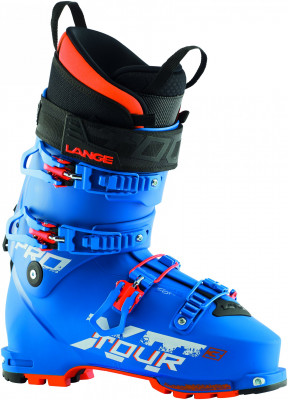 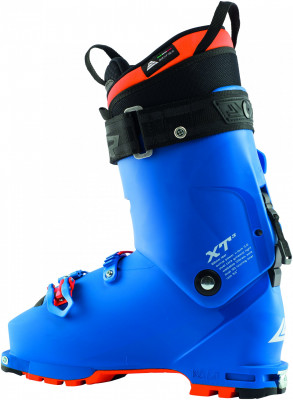 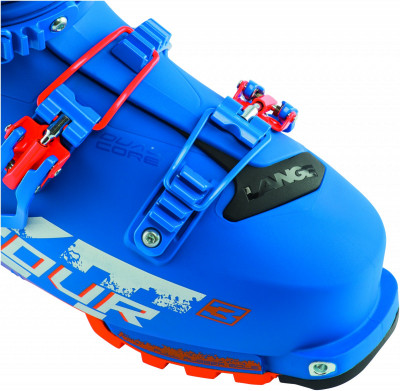 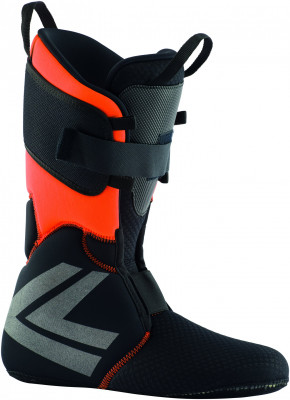 You’ve earned it. The new Lange XT3 Tour is the perfect companion for missions where you truly earn your turns. You woke up while the roosters were still fast asleep, tucked cozily into their flannel sheets. You were the first to the trailhead, braving the icy roads before they were plowed. You broke trail, dealing with brutally cold temperatures and howling wind. The reward for your early morning sacrifice is an unadulterated ski line begging for you to drop in. During moments like these, you want a boot that will allow you to receive maximal returns and the Lange XT3 is that boot. The Dual Core Sandwich construction, which features a soft plastic wrapped by harder plastic, delivers a uniquely damp and energetic feel on the descent while the 53° range of motion will make the ascent fly by. For the times you find yourself on an icy booter, the ISO 9523 Vibram sole will provide reliable traction, so you can trudge on with confidence. Built for performance on the down without being too punishing on the up, the new Lange XT3 Tour is the perfect companion for your next adventure. 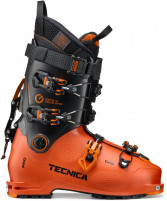 How do these fit compared to the Atomic Hawx XTD Prime 130? I found those to fit very well on the cafe, ok at the heel but way too roomy in the toe box and instep. I’m returning them.
Thank you!
Answer from Jeff
Eric, The Hawx Prime is the wide version of the Hawx series. The XT3 Tour Pro is called a 99mm last, but is a bit more towards a medium fit and volume. So the Toe box is narrower than the Prime, the instep height will somewhat similar. Adding the appropriate thickness footbed will help there.
Answer this question:

I'm giving this five stars based on how it would do if it fit you properly. I could not get a perfect fit which is why I'm not keeping.

fit notes: This boot is very high volume imo and pretty wide. I had to punch radical pros to be comfortable and in the same size on this boot i could wear it out of box. I also think it has a deceptive forward lean because they advertise it as the same as radical pro. But in practice it feels way more aggressively forward and I believe this is because it feels like it has a higher heel. So even though the cuff might only be at 11 or 12° when you account for how much higher your ankle and heel are then it feels much more forward.

It's also pretty challenging to get your foot in and out, but that's just the nature of a four-buckle.

Pros: If it fits you well I have not found a boot that can wrap around your calf and foot and create such a secure feeling. I was able to get that around my calf but not around my heel entirely. If I could have this feeling around my calf on other boots I would instantly swap. As I mentioned, it's fairly high volume and while my foot is high volume in certain areas, it's low around the ankle joint. I could have put in a liner with some higher volume to deal with this but mainly just didn't prefer the higher heel height. This boot is also wickedly warm, way warmer than radical pros. I think it's actually probably warmer than radical pros even if I put on a boot glove on the pros. It has a more progressive flex and a stronger flex than the radical pros and I do not think that there is a stronger boot in the category. If you like aggressive forward leans and want to charge with a high volume foot then this is your boot. No doubts about it. Touring wise, this is a deceptive boot, I think the combination of the slightly higher heel with the rockered toe allows it to walk way better with the top two buckles unbuckled then you would think. Yes, you can notice the slightly reduced range of motion as compared to a radical pro but let's be real, No one that is considering these boots are trying to do full range of motion skimo strides like Killian so personally I don't think it's an issue in this boot and I would happily tour in them all day.

Cons: heavy, but not so bad. Still what I would put in an all day category. Reduced rom-in a radical pro you will find your anatomical limit before the boots limit (for me at least), but in this if you are really stretching out you'll find the boots ROM limit. Like I said, I don't think it matters for people considering this boot. This is truly the only thing I've tried that doesn't feel like a touring boot on the down, but walks like one.

I did a few days in the boot fwiw and would fully endorse it for the people and fit I've described.
Comment on this review:

What has the tallest cuff height between this, radical pro, and zero g, and la spo vanguard?
Answer from Will M
Hey Anthony,

Get ready for some numbers, hopefully this helps! These measurements are of the shell without the liner.

Have you had a chance to ski these? How do they compare to the Technica zero g pro?
Answer from Ian C
Hi Steve, While I haven't had a chance to ski these yet, I have tried on both pairs and helped bootfit people to them. They are both quite stiff and high performing boots, but with a different fit, and the XT3 is still going to come out on top in terms of stiffness (at a weight disadvantage). The XT3 feels like a proper alpine boot with a walk mode and will come with a slightly wider forefoot and higher volume fit.

Among beef boots, the Tecnica Zero G is definitely for people with low volume and narrower feet. If you've got any follow up questions, feel free to write to us at help@skimo.co!
Answer this question: