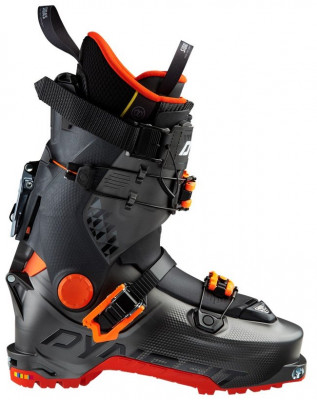 For the hard charging skier who regularly ventures into the sidecountry and the backcountry, the fine folks down at Dynafit have for you the Hoji Free, a quiver-of-one freeride touring boot that is compatible with both tech and some alpine bindings. If you plan to spend most of your time skiing out of backcountry trailheads, we recommend you either hit that preseason training program especially hard and develop some serious stamina, or maybe consider one of our purely backcountry touring boots, found here. However, for folks who ride the chairlift as often as they hit the skin track, the Hoji Free is hands down one of the best options out there. With a wide range of motion and flexible v-shaped tongue, you'll be outpacing all your pals who are wearing true alpine boots with "walk" modes, while you zip along out front. On the descent, the 130 flex index rating of the Hoji Free feels indistinguishable from an alpine boot, where three buckles and a stout power strap offer all the security you need to ski as hard as you can. Fully moldable liner ensures that even the pickiest of feet can be made to feel great in these boots after a quick visit to the shop. 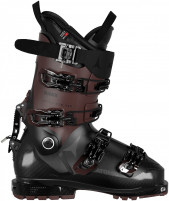 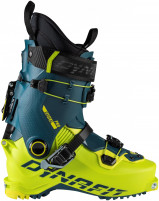 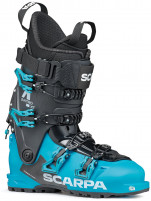 Are the materials used in this boot suitable for doing a width stretch at the front?
Answer from Emmett I
Koen,

Yes, this boot can be stretched and punched!
Answer this question:

Hi..I have a pair of Hoji free 130 (love them) but I have a crack in the shell tongue at the middle buckle. Can I find a replacement tongue somewhere?
Thanks, Tom
Answer from jbo
Hi Thomas, yes we do stock Hoji Tongues.
Answer this question:

How well do these walk/climb compared to the Zero G Pro?
Answer from jbo
Hi Steve, generally the Hoji walk system is one of the best in the category. With the relatively beefy liner in the Free, I would say they are rather comparable to the Zero Gs, maybe a touch more resistance.
Answer this question:

The Dynafit Hoji Free 130 has an ISO 9523 sole. It is compatible with Tech, MNC, and Hybrid bindings. Unfortunately, it is not compatible with Grip Walk bindings like the Look Pivot 15 GW.
Answer this question:

I'm really impressed with this boot, but slightly frustrated by the ankle ratchet buckle, which is impossible to keep closed when bootpacking due to its location on side of boot, and is easily iced up in the same bootpacking scenario.

Have you seen any mods which locate the buckle up onto the top of the boot, so it's out of the way when booting?

Cheers,
Tom.
Answer from Cole P
Hey Tom, we are not aware of any modification for that strap. If you keep that buckle loose that could be the culprit. If that buckle is not tight it will not have enough tension to keep it closed. If the buckle is
tight and still experiencing the same issue then I would see if it is damaged or just overused. We do sell new Hoji buckles here. If you need any further assistance reach out to help@skimo.co and we can try to dial you in further.
Answer this question:

I've heard the sizing and fir of the Free is slightly larger than Dynafit boots of the past, like Vulcans and TLT6s. If I wore a 28 in TLT6s and Vulcans (as I recall), should I order 27.5s in the Hoji Free??
Thanks
Answer from Will M
Hey Chachi!

Thanks for the question! I recommend emailing us at help@skimo.co or filling out the boot fitter form. That'll allow us to give you a bit more of an accurate answer!
Answer this question:

Thought I’d give you quick feedback on Hoji Free v Lange XT LV Free Promodel since you don’t carry the Lange and there is some comparison to be made.

It was obviously pretty warm here end of season so that obviously impacts things v cold weather, but I’d just had the Lange out couple of days before so close apples to apples.

Basically, the walk mode and ROM were huge differences. Far better on Hoji, no downside to that system. I didn't do as Dynafit suggested and adjust completely to downhill first then leave as is when switching to walk mode. I did have to loosen booster strap a little and first buckle one notch to be in best position for walk but still, to get to downhill comfort in transition was very easy, easier, than with a traditional system. Flex – pretty close. Lange Promodel is stated at 140 and is stiffer than the 130 XT Free LV which I've also owned and stiffer than the Cochise Pro 130, but if anything it’s only a little stiffer at first part of range and I believe the Hoji is smoother through the range – surprisingly more alpine boot like.

Volume was very close, but the instep height is lower on Hoji and that actually helped my foot where the higher volume on Lange in that part of the shell was a little bit of an issue.

My foot felt lower in the shell, closer to ski in the Hoji – very different feel that way between boots. Not sure what that is. Threw my old Cochise on and difference with Hoji was the same. Maybe a little less ramp angle so I feel lower? Not sure. But different for me in a positive way.

Only thing I didn’t like so much was adjusting that 2nd buckle. Obviously didn’t have everything dialed in yet, so had to stop coming down and adjust. It’s difficult to make small adjustments with the strap if standing awkwardly but it was my first day with boot.I think I'll get batter at it, but can't see how it will be as easy as a traditional buckle.

So I definitely preferred the Hoji Free and to a level that surprised me. I think the only way someone wouldn’t is if they had an issue with the lower instep.

One last note is that the length felt very similiar to the Lange in case that's a reference point for someone. 29.5 lange; 29 Hoji.
Comment on this review:

Wondering what the ramp angle is on the Hoji boot, both the Pro and Free.
Answer from TSB
Hey Gordie, unfortunately we don't keep measurements on boot ramp angle, nor do we have a way to measure it -- sorry to say!
Answer this question:

I was told to go up a half a size from your normal ski boot when you choose a touring boot. Is that where you would start as well?
Answer from jbo
Hi Todd, I'm not sure that's a great rule of thumb, there's a lot of nuance in this equation! Your best bet is to visit our boot fitter.
Answer this question:

I had the privilege of skiing this boot for the last half of last season and was really impressed with the downhill performance and great "walkability." The 55 degrees of cuff rotation is as advertised and really easy to utilize with the "Hoji-Lock" lever on the spine of the boot. The fact that the lever also loosens the cuff buckle and power strap is an added bonus and makes transitions a breeze! On the downhill, the boots hold their own against true alpine boots and I had no problems skiing them hard at the resort as well as out touring. It really is the one boot to do everything in. Despite having a quiver of boots at my disposal, I have found the Hoji Free to be my go-to for both resort and BC days. **Disclosure - I work as a rep for Dynafit**
Reply from Justin M
Curious how you think the Hoji Free compares in the real world to the Hoji Tour (which I own). I’ve read the specs, just wondering if you have any side by side experience to share. Thx
Reply from TSB
Hey Justin, the Hoji Free has the same level of performance as the Hoji Pro Tour, albeit with a slightly different fit (narrower, higher arch) and a newer, beefed-up liner.

Look forward to getting EPoore's input on this as well!
Reply from Eric P
Hi Justin, having skied both of them. I would say that the Free is a stiffer flex and a narrower lower shell (more of a performance fit). Having worn them side by side, I would say the 130 (Free) and 120 (Pro Tour) flex rating is accurate. There is more room over the top of the foot in the Free which I really appreciate and more room in the ankle. I wouldn't say there's a noticeable difference in the ROM when touring thanks to them using the same Hoji Lock Mechanism. Having been a Vulcan lover for years, the Free fits the void my Vulcans left in my boot quiver. Hope this helps!
Comment on this review:

Has the last been normalized as compared to the initial Hoji? That is, have they reverted to the TLT, or something else?
Answer from Jeff
Hey Thom! We haven't got any in to try on. The word is that it is 'normalized' as you say. Not the TLT or Hoji Pro.
Answer from jbo
Hi Thom, as compared to the Hoji Pro, Dynafit brought the toe height down a notch and also made it a bit narrower in the forefoot. The instep was opened somewhat as well.
Answer this question: