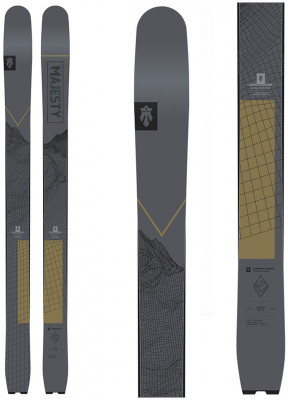 Not just any nova, the Supernova from Majesty is an all-around, high-performance ski with a penchant for the soft white stuff. It partially achieves this versatility using a Cut-Off-Tail, cleverly called COT. By cutting off the tail and moving the skier's stance back on the ski, Majesty was able to make the Supernova maneuverable but stable enough for you to “let 'er rip” when the need arises. The other half of this versatile personality is the rockered tip and flat tail. This combination allows for both plentiful face shots in the depth of winter and a confidence-inspiring edge hold on the firmer conditions found during springtime. Sure to please all the astronomy nerds out there, the Majesty Supernova Carbon Ski is a versatile ski that can keep up no matter what the day has in store.

I needed (more like wanted) a new mid-fat touring ski. Usual options were in mind...ZG105, Scott, Black Crows...then I saw a French review of the Supernova - apparently the best of all the skis they tested.

After many days use, I can see why this ski got such a rave review. It's surprisingly stable for its weight, and whilst it doesn't thrive in icy conditions, it will let you get down without too much consternation. That's it for my criticism.

Anytime there is actually snow rather than ice...these things are in their element. I've skied them in boot-top power, corn, and dust on crust. They can be pushed as hard as my ZG108s, but when it comes time to turn, these things are truly amazing.

The cut-off tail, tip taper and sidecut work together to make this an extremely nimble ski. It doesn't matter if you're going fast or slow, centered or in the back seat, this ski will turn with ease, and yet with bases flat it can haul.

Majesty are making some great touring skis, and the Supernova is probably the pick of the bunch.
Reply from Ben
Do you have the carbon version or the standard layup? Where did you find a review of the Supernova? I'm intrigued by the cut-off-tail design and would be interested to read feedback on it.
Reply from Dan C
Hey Ben,
I have the carbon version in the 177cm. (I'm about 78kg and 180cm tall).
The review I saw was in Ski Rando...French gear magazine. They rate skis out of 4 criteria - Performance, Ease of use, Versatility, and Weight (climbing). Basically the Supernova just marginally outscored the ZG105. I know it's subjective and all that, but yeah, Supernovas are great skis, and I'm not the only one who thinks sio.

Cut off tail is quite weird in a way. Visually there is a lot less ski behind you, and it feels like a fair amount of ski in front. On snow, the ski feels super nimble, but it has the length in front to deal with weird snow and higher speeds. I think the design is super successful in combining stability with agility. It is the ski I'd take if conditions are variable, as it is easy to turn in all but the most contorted of positions. It is also interesting that the mount point is further back than on skis like the Superwolf and Havoc.

Overall, I am still stoked with this ski, and I have skied and owned plenty in this category (ZG108/105, Moment Commander Tour, Black Crows stuff)
Comment on this review: