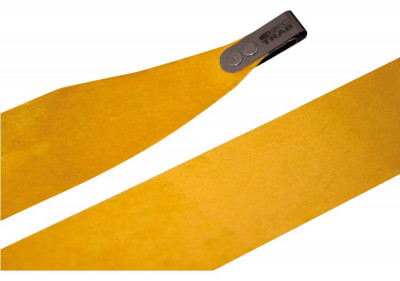 The Gara Aero race skins are made with 100% mohair and are designed to attach to the Gara Aero World Cup skis. The skins feature the Attivo fixing system that has wide tip clasps with a pull tab. These are parallel race skins that don't need trimming. In fact, Trab even pre-rounded the tails for you. Just hook the clip on the tip, run your hand along the length of the skin to help the glue stick, and start winning. These are some of the fastest skins around and rip off easily due to the oblong tail shape.

How do you rip these skins during race transitions? I'm trying to imagine pulling on a metal fixed front attachment and it doesn't make sense. thanks for any info
Answer from jbo
Hi Chris, good question! The metal is semi-flexible and there is a little vinyl pull tab that gets tucked underneath it that makes it easy to pop right off. It doesn't wear out like a bungee cord.
Answer this question:

I have two sets of these that came with a pair of Gara Aero skis I purchased used. Can't compare speed on these to other mohair skins but the glue has generally been sufficient on some long tours in very wet conditions, provided you wipe down your bases well at transitions. Mohair seems to be durable enough but can update with more time. The shape of the skins is very nice (tips and tails)

My only gripe regards the tip attachment. While I love the setup for taking skins off, the downside is that if your skin gets snow under the front half of the skin (seems to happen to me when sideslipping when the skins are already saturated), you cannot remove just the front of the skin to wipe the snow off, but rather must remove the whole skin to be able to refit the tip attachment. This doesn't happen often, but is a downside compared to shock cord style tips.
Comment on this review:

Five Stars for a race skin with reliable glue and typical fast mohair glide.
By comparison, I've used 100% mohair skins from Atomic, Black Diamond, CAMP, Colltex, Dynafit, plus various unidentifiable black sources.
Something about the Trab material feels very nice to the touch -- just hanging them up to dry is a joy to touch them with bare hands(seriously!), yet they have enough stiffness for clean rips.
The tapered tail is also very nicely designed. I even plan to start using it as a cutting template for other race skins!
I have lots of experience using the proprietary Trab tip attachment on my Magico ski. But the Trab tip attachment is also very secure on any squared-off tip like the Hagan X-Race. For a more rounded-off tip, like on my older-generation X-Race, I have managed to lose a skin twice, once by just affixing it very sloppily, and another time on a really nasty sidehill where I was slapping my skis around.
Reply from Jonathan S
Update: I think this race skin is the champion for cold temps.
Details:
- Four us went out to Idaho this past month (Dec '16) for the USSMA races.
- Temps on the drive to the resort (Brundage) the morning of the Individual race were -23F, then warmed up (hah!) to -15F at the start.
- I highly doubt temps ever became positive, although they probably warmed up to the negative single digits after awhile.
- Plus lots of powder at all the transitions to mess up your skin glue.
- Five skintrack ascents, and the first ascent was after a downhill ski, so that means we had to affix skins to (very!) cold bases five times.
- You can imagine the skin problems that people experienced. And I had to wear far more clothing than I ever have for any race (since the 2004-05 season).
- My plan was to start off with these skins for the first ascent, then swap back & forth with a different pair for subsequent ascents, that way allowing more warming time before reapplying a pair of skins.
- But except for the reapplication after one very brief ski descent, I just kept using these, transition after transition. They held on just fine!
Reply from Jonathan S
And another update: I now think this race skin is also the glue champion for warm wet conditions.
Details:
- Temps were supposed to top out around the high 30s, but instead felt more like the 50s.
- Race became such a sweat fest that any eyewear become hopelessly fogged, sweat was literally dripping out of my helmet, and the more recreational participants were stripping down to just short-sleeve shorts or even no shirt at all for one guy.
- Course required 25 transitions including 11 different skinning segments, although "only" 7 reapplications of skins.
- However, those 7 reapplications consisted of attempting to wipe down a totally wet ski base with a totally wet race suit arm.
- Yet my totally wet skins stuck perfectly every time. (And I was so confident in them that I didn't even bother bringing a back-up pair of skins!)
Comment on this review:

I've used a variety of CAMP and TRAB skins over the years and to me this is one of the quickest out right now. Glide testing in a number of conditions this particular skin wins out every time. They are noticeably lighter as well - the backing is thinner and more supple than previous TRAB skins. Added bonus is the glue ... I have been using this skin in CO where traditionally we re-glue our skins right out of the box but the glue has been reliable even on cold mornings below -10. I've never used POMOCA but compared to previous CAMP/TRAB's these are money! If fast/light is what you are looking for this skin is a great choice.
Comment on this review: