Imagine if you applied the solid lightweight construction and easy skiing rockered tips of Voile skis to an ultralight size geared for skimo racing and speed touring. Well Voile did just that when they started the Wasatch Speed Project. The resulting ski by the same name is as unique as the namesake mountains that rise above Salt Lake City, Utah, where the skis are made.

A lot of people have been skiing uphill fast in the Wasatch mountains in recent years. They (and you) can now do so affordably with an American made ski. With a profile based on the popular Vector backcountry ski, the Voile WSP is designed to get you uphill fast and get you downhill with a smile.

Note that Voile suggests a skier weight range of 110-170 pounds for this ski.

Update 2017/18: The Speed Project got faster and more energetic thanks to the black base material. Besides that and a new topsheet, the ski remains the same.

Update 2019/20: Voile added a 150cm option to this ski in lieu of the Voile Wasatch Speed Girl. Voile gave both lengths a new coat of paint.

anyone used this on the grand traverse? or thoughts on using them on the GT?
Answer from Tristan M
Hi Kelly,

It is pretty common to see Skimo race skis on the grand traverse. The Voile Wasatch Speed Project would be right at home! In fact, the light weight, ease of transitioning, and the joy this ski provides on the way down will make your GT that much more fun! If you have further questions on race skis, feel free to send us an email to help@skimo.co.
Answer this question: 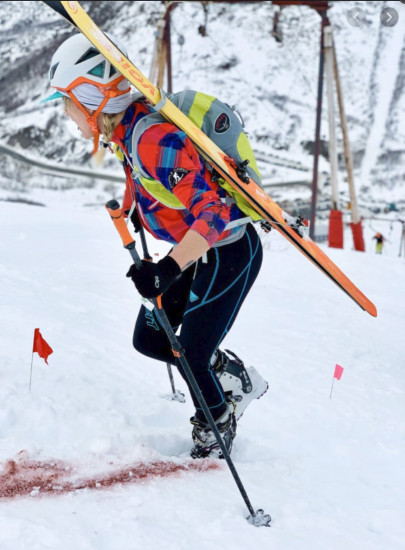 Though they make the women's WSP shorter and lighter, I chose to get the mens for increased control on the descent. I use them for racing as well as summer skiing, when there's a long walk with skis on the pack for turns on nice, consistent, consolidated snow. I have also used them for long traverses and in quite variable snow conditions. They're awesome on windboard or corn or a bit of dust on crust. They're okay in variable conditions. Bottom line: they are surprisingly versatile for a tiny ski, and I love having them in my quiver!
Comment on this review:

The Voile WSP was my first race ski...and I'm now a convert. The ski is a touch heavy for a race ski, but they ski extremely well. I've skied everything from chunky moguls in the resort to a foot of fresh in Cardiff on these skis and they handle it all with ease. These skis make taking out the race set up on a pow day the obvious choice. They can race, but make more sense as a ultralight backcountry setup for endless laps due to their slightly heavier weight and awesome all around downhill performance.
Comment on this review:

I'm thinking about buying a pair of these as I like the price, weight, Voile's reputation and that they're made in the US. That said, I'm an average skier at best and this would be my first race ski and first time on anything similar in terms of dimensions. I'm currently on Hagan Cirrus and really like them. A pair of WSP would be a compliment to those and mainly for the Grand Traverse this spring. Thoughts? Are these going to be a handful if I'm not already accustomed to race skis?
Last question: Is the toe piece on these typically mounted in relation to boot size or does to toe piece always mount at a specific pivot point? Trying to sort out binding options and various boot setups....
Answer from TSB
Hey Brian, thanks for reaching out! If you're already skiing (and liking) your Cirrus, the WSP wouldn't be too big a jump, and I think you'd appreciate the weight (even lighter) and maneuverability (even greater). That said, the WSPs have a good bit more rocker for their length than the Cirrus, and a rounder flex with a less supportive tail, so I wouldn't necessarily recommend them to you right off the rip. A stiffer race ski, like the Plum Roc D'Enfer, might feel more confident and in-line with your ski style. Don't hesitate to reach out to help@skimo.co for a more detailed conversation.

As far as the WSP goes, we typically mount race skis based on pivot point (sometimes known as "pin-line") to optimize uphill performance and kick-turning, but Voile recommends mounting the WSP on boot center. Depending on your preferences, we could go either way!
Answer this question:

This is the first Skimo Ski I have spent time on and I am just getting into this type of skiing therefore take such into account with my review...
I have these set-up with Dynafit Low Tech Race 2.0 and Scarpa Aliens. I have been skiing these for the past month (December) regularly, mostly around the resort, mixed conditions, off-piste, and a little pow. I really like the skis and these do well for my goals (getting vert, and back down the hill in one piece). I understand there are lighter skis for going fast on the uphill, but getting used to skinny skis on the downhill I would say these absolutely are the best choice. The little bit of tip rocker is key, also the skis are a bit on the softer side of what most race skis have which has helped me gain confidence in turning and steering. However, they are definitely stiff enough to handle off-piste stuff that I have encountered so far. Furthermore the damp, easy-skiing feel of the Voile WSP seem to solidify my choice of going with them. I do want to race on these soon and am looking forward to testing them in spring/warmer snow conditions.
Comment on this review:

Need an opinion:
I'm between the Voile WSP and Objective (maybe BC version, could be convinced either way). Looking to do mostly fast touring, inbounds laps, fire roads, and some hut trips in CO, maybe one or two Wednesday night skimo races. I ski decently hard (not hucking cliffs but I'll hit the side kickers and spend lots of time in the trees) and am down to ski any terrain, but definitely more concerned with light and fast ups/long tours. I would probably lean towards the WSP only concern would be snapping them and tight turns, and the Objective is pretty sweet and hard to say no to. I'm about 5'6" 140-145ish, looking to pair them with dynafit PDG boots and speed turn bindings. Definitely on a budget as a college kid so this would be my only setup to do everything with.
Thanks!
Answer from Jeff
Drew, For all the things you want to do and skiing " decently Hard" , the Objective seems the way to go. In the 164 cm they are only 1 pound heavier. So it can be a causal racing ski too. Just my Opinion
Answer this question:

How many of the voile wasatch speed project 2016 model do you have left?

I'm on furlough due to the government melt down and cannot buy them rate now.

I have bindings for them.

I have aliens. If I shipped you the bindings, could you include a mount with the price? Just a question.

Hope you have more ski area uphilling. I dropped by the store in November after a trail run. Great store.
Answer from Trace Leches
Hey Andrew! Sorry to hear that man. We're really low, but send me an email at help@skimo.co and I can secure it for you until things get back up and running.
Answer this question:

I love these skis, but I also think it's important to recognize that the skinny rando-race ski is a rather specialized tool. I was perhaps a bit swayed by folks like Andy Sherpa, who do some pretty amazing skiing with rands-weight skis (e.g. http://slcsherpa.blogspot.com/2017/05/liberty-ridge-speed-attempt-707-car-to.html).

For my part, have found myself missing a somewhat wider ski (like 78 at least) whenever I ski them. It's just more fun and I guess worth the few extra hundred g on the way up. The light weight of the Wasatch Speed Project is amazing for the price, but unless you are actually racing, or immortal like Andy, I'd advise something like the Ultimate 78, the Trab Magico (or one ultra-light skis that are even wider, now on the market, if you have the money). For my part, I'll probably sell these as I find I just don't use them that much. Looking to replace with Trab Misticos or Dynafit Speed 90s most likely. (only about 200-300 g heavier / ski, and 90 rather than 63 mm at the waist).
Reply from John B
Eric, I own and regularly use a pair of Hagan Cirrus (now updated to the Hagan Ultra). I really like them and am impressed with their stability, carving/skidding/pivoting ability (I think the ability to pivot turns is due to the excellent rocker shape), and light weight. They feel totally great in a wide variety of situations, particularly in firm snow, wet snow, or faster soft snow conditions (couple of inches of fresh over hardpack). Great for fitness skiing and bigger objectives later in the season. I ski them with Aliens and Kreutspitze SCTT bindings. That might be another one to add to your potential list. I do agree with you that the skinny rando skis are just a little too skinny and squirrely for a regular ol' skier like myself.
Reply from Eric S
Good thoughts John B., As it turns out, I am enjoying my Speed Projects more now that I'm on TLT6 rather than TLT5. The forward lean angle on the TLT5 was just too much.

Looking forward to my new Misticos, though, which are on the way to me from Skimo!
Comment on this review:

I haven't ever skied another rando. ski so my review may be somewhat void. But ...

I have these set-up with Dynafit Speed Superlites and Scarpa Aliens. I have been skiing these for two months pretty regularly, mostly around the resort, in a fair mix of fresh cord., end-of-the-day cord., chundered off-piste, and a little pow. Overall, these little things do pretty dang well. The little bit of rocker is clutch. On the cord. they rip really well and they are definitely stiff enough to handle the lousy off-piste stuff you'll encounter racing. While I do feel like I'm ready to race them, I'm more so looking forward to running corn laps on these things this spring!

Again, I haven't skied any other rando. skis so I do wonder how they compare. The WSP definitely has some narrower specs. than most other rando. skis (Example: The Atomic Ultimate 65 has a 97 shovel; the WSP has an 84). Stiffness-wise, though, I wouldn't want anything stiffer than this (I'm 150 lbs., 5'11).

Overall, I'm pretty happy with these skis.
Comment on this review:

I've skied on these every day for the last week. I totally love these skis. Sure, for racing the weight isn't stellar, but if you're racing I believe you'll make up the time on the downhill. The rocker totally inspires confidence and it's really helping me get out of the quad burning back seat. They turn effortlessly (with rocker & upturned tail). They're stiffer than I thought they were going to be, making hard pack moguls no problem. The dimensions look like they're slim, but they're just as wide as my SkiTrab World Cups and ski like they are wider. The price is almost half of several of the Euro skis, plus the graphics are WAY cooler.
Comment on this review: