A metal shovel light enough for racing? ARVA says yes, it's possible, with the new Ultra. Weighing just 302 grams (10.7 ounces), this ISMF compliant digger features a carbon fiber shaft that easily snaps into a svelt aluminum blade. When disconnected, the parts are slim enough to stow easily in a race pack. If you're not quite comfortable carrying a kids' toy during a race, the ARVA Ultra gives you a more robust option. Either way, we're still hoping there are no burials during a race.

Update 2018/19: Arva realized the Ultra shovel was more than strong enough but as always, could be lighter. Weight savings cutouts have been implemented in low-stress areas in order to save weight even further.

Update 2020/21: The Ultra Shovel gets even lighter with a new color scheme. 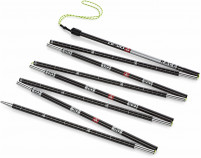 This shovel (in particular the shaft) is ridiculously light and quite compact. The carbon fiber shaft seems to be quite strong, but I wouldn't want to do be prying hard snow with it. You shouldn't be prying when digging anyhow, so that shouldn't be a major issue.

I've used the shovel a number of times to dig a snow pit, build snow walls, or dig out a flat spot for a tent and it's handled that quite well even in quite solid solid snow. That being said, I still prefer to bring a more robust shovel with me under most conditions. I'll really only take the Ultra out with me on big days with low avy hazard or days where I'm not planning on skiing any avy terrain anyhow.

Time will tell if it holds up, but so far I'm impressed!
Comment on this review: 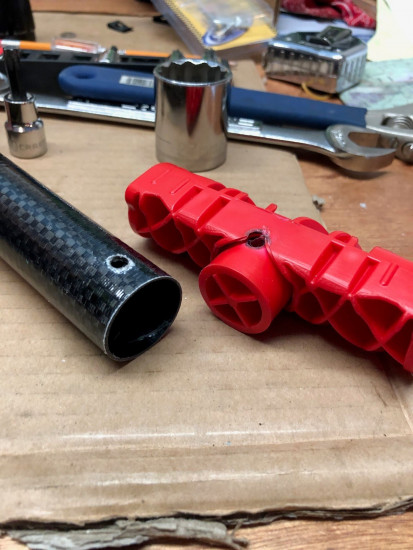 This is a great shovel, much more durable than I expected and obviously very light. Not the ideal digger for chopping ice or extreme abuse; but for emergency use I'd much rather have a metal blade than a plastic beach toy. For shoveling tent platforms, mountain chores or a light touring pack when I don't expect the shovel to come out; this is a sturdy companion that you will hardly notice.

It did fit in my UD Skimo 18 pack (size M/L) but due to the length of the handle it was somewhat tight. It was easy to modify the handle, I chopped about 3" off mine and now it disappears in the pack, hardly noticeable.
I'd recommend this shovel, great piece of ultralight gear.
Reply from Big Mike 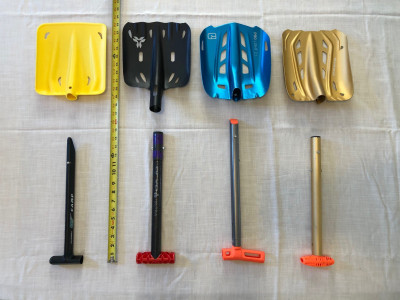 Will this fit into the Ultimate Direction skimo 18 pack compartment?
Answer from Trace Leches
Hey Mike! Indeed it will! It'll be kinda tight in the S/M but it still fits! It fits great in the M/L though! We went through this experiment once before actually! Find it here under the "Reviews" tab!
Answer from Mike K
I see. What recommended shovel for the S/M size that I got for Christmas?
Answer from Trace Leches
Hey Mike, sorry for the slow reply. I like the Mammut Alugator Light because of the small blade (slightly larger than this Ultra, but realistically it's about the same size) and collapsible handle.
Answer this question:

Overall: Five Stars for by far the lightest metal-bladed shovel. If your only goal is to meet the ISMF reg, then you can save about an ounce and a half (plus some $) by buying the CAMP Crest. And if you want a larger blade for moving unconsolidated winter snow, then the CAMP Plume might be a better choice with a relative weight penalty of less than four ounces. But the ARVA Ultra offers an amazing combination of a fully functional “real” shovel at rando race weight (or rather, lack thereof).

First, the first impressions out of the box: Although obviously small, this shovel seemed “real” enough that I was sure it had to be far over its spec weight, given the metal blade and sufficiently long shaft. But the spec is spot on, so it is indeed about half the weight of a typical compact shovel.

The shaft end is nicely plugged and inserts reliably into the shaft. But I noticed some looseness in the connection. This prompted me to check some of my other shovels, whose varying looseness I kind of noticed for the first time. Still though, something about the combination of the carbon fiber shaft and the loose fit concerned me more than on my other shovels. But after wrapping some tape around the base of the shaft, the fit is now just right: secure yet still very easy to assemble.

Second impressions, in use: The plastic “T” handle is fine for gloved hands (but might be too small for mittens). The “neck” on the blade entails a longer effective packing length, but it still fits fine in the small outer compartment of my original-generation Dynafit Broad Peak 28.

Third impressions, for long-term durability: The blade material seems relatively thin, and the neck weld is relatively short. For backcountry companion rescue with good technique (i.e., chop then lift, not pry!), I think the Ultra should be fine. But for snowpit work, well, you want a larger blade anyway, so somewhat of a moot point, as the Ultra’s sole intended purpose is emergency rescue.
Reply from clarkboulder
great review. appreciate the detail.
Comment on this review: