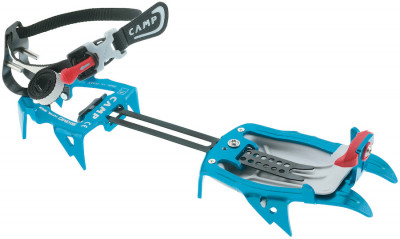 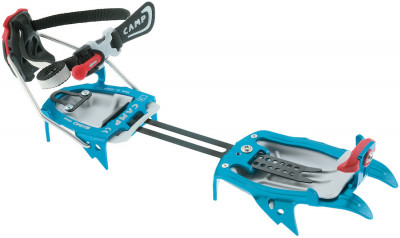 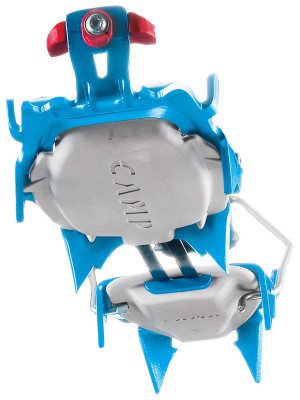 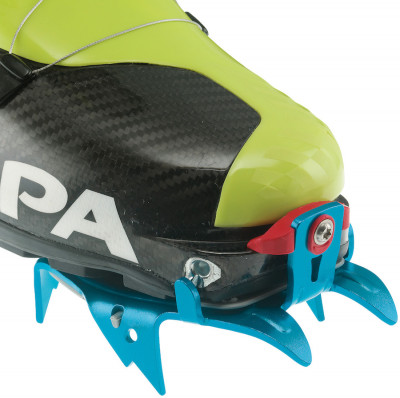 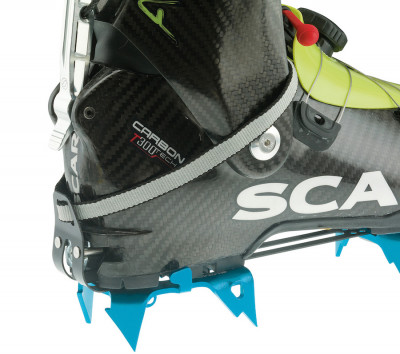 CAMP’s penchant for light ‘n fast gear is almost as geeky as ours. And we must say we're honored they chose Skimo blue for these awesome race crampons that were seemingly designed for our store (the Italians did admit they had us in mind). CAMP tasked some obsessive speed freaks with creating the fastest race crampon in the world. The plan is to further solidify podium finishes, topple records, and instill confidence in the mountains. Utilizing an all new T-Stop toe bail system that creates a larger target to corral your toe welt when your heart-rate is sky high, the Skimo Race Crampons are as fast as they are light. Speaking of weight, the toe and heel are crafted from a carefully treated 7075 Aluminum which makes them light and strong for years of racing, traversing, and spring missions. Choose between the pin-based Clip-In heel system (aka "Total Race") and the tried-n-true "automatic" heel-lever system to securely attach the crampons your boot. If you like racing or just don’t have time to go slow, the CAMP Skimo Race Crampons are some of the best in the business for quickly accessing difficult terrain. And boy do they look sharp!

Does the Dyneema linking strap make any difference for how the crampon fits? I'm thinking of using these with the La Sportiva Skorpius, and I'm wondering if I would need the linking strap or if it is only to save weight?
Answer from Tristan M
Hi Sally,

The Dyneema linking strap is primarily for weight savings. Both the traditional bar on the Camp Skimo Race Crampons or the Camp Skimo Tour Crampons will work just fine!
Answer this question:

Have used the Camp Race 290 (Dyneema) and the Petzl Leopard and now switched to these guys. I think they're currently the best option for racing. Super light, decent size points. Toe is fairly adjustable. The only caveat is you have to set it REALLY tight. Like way tighter than it feels like you should. And try running around in them on firm snow before racing. Seriously - adjust them well!
Comment on this review:

These are sweet, very lightweight and easy to attach. They fit really good with yellow Aliens 0.0 and 1.0. Previously I used Camp Race 290 crampons and even with the aluminum linking bars it was not possible to achieve secure fit, during every race they eventually failed. This is no longer the case with these blue wonders, I already completed three races without any issues, they do the job perfectly.
Comment on this review: 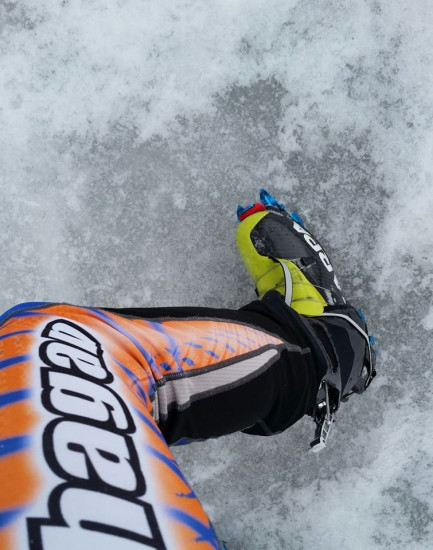 Five Stars for the “Clip-In” version aka “Skimo Total Race” set up with the optional-purchase Dyneema linking strap. I have not tried it though with the originally included metal linking bar. Additional bonus points for the included reasonably light yet protective pouch plus anti-balling pates (although since I have no use for either, I wish instead the Dyneema strap had been included).

This is my seventh pair of aluminum crampons over the years. The only pair not made by CAMP among those is the Leopard LeverLock FIL. The CAMP Skimo Total Race model with the Dyneema strap is lighter and more compact than the Leopard LLF, although by only an ounce per pair and some equally small margin, respectively.

The Leopard definitely has the edge on the CAMP for ease of both initial setup and attachment in the field: with the Leopard, initial adjustment took me only a couple minutes or so indoors, and attachment is just the traditional lever flip.

By contrast, although the new CAMP Skimo Total Race is a vast improvement for both factors compared to its predecessor CAMP Race 290, still takes some effort. First, I switched the front bumper to the lower of its two positions for my size 42 Scarpa Alien 3.0 boots (but with no other mods, unlike on the Race 290). Then I spent a lot of time indoors getting the Dyneema strap length dialed in exactly right. Unfortunately this turned out to be a total waste of time, as this really needs to be done on snow to get it sufficiently tight: even a setup that seemed tight inside worked its way loose almost immediately on snow/ice. (Definitely become familiar with the adjustment process first inside – essentially the same as doubling back your climbing harness – but don’t bother fine-tuning it until you’re on snow/ice.)

Fortunately, the adjustment is tool-less (unlike the CAMP Race 290), although also requires being gloveless. However, after a couple iterations of adjustment rounds and a couple hundred vertical of booting up a closed icy resort ski trail, they felt great with essentially zero play. Still requires some effort though to attach them because of how the rear attachment must be pulled back with enough flex to clear the pins over the heel. But removal is just as quick and easy as with any other crampon design, plus the buckle has the same clever pull design as on CAMP race packs.
Reply from Jonathan S
Whoops, cancel that review: this crampon simply does not work with the optional-purchase Dyneema linking strap. Period, or rather exclamation mark, to reflect the "excitement" of when it fails almost instantly in the field.
As reflected in my review, I spent a lot of time trying to get it dialed in just right, thinking after each iteration that I just needed to fine tune it more. Actually, the strap was slipping each time, given its inherently insecure design. I realized later that when I had thought it was secure, I really had just "lucked" out in traveling some terrain briefly that didn't entail any twisting.
CAMP spent months evaluating my pair (or at least waiting on issuing a refund) before giving up. Perhaps the strap might work with other crampon models, and perhaps this crampon model works fine with the included steel linking bar, but the combination of this crampon model with the Dyneema strap equals almost instant failure (which can be easily demonstrated indoors once you know what to look for).
Comment on this review: