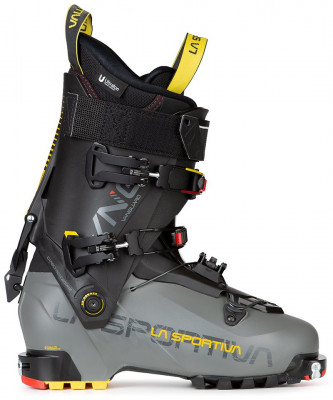 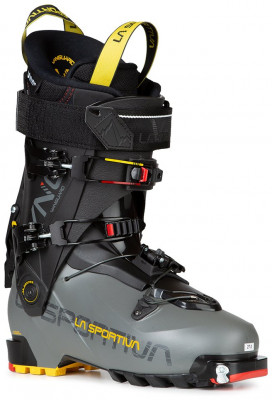 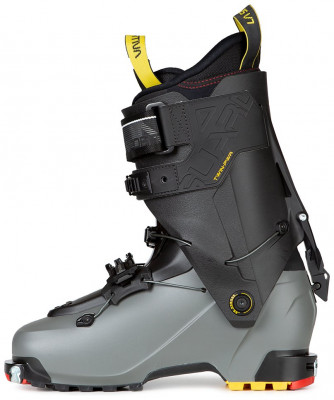 To the La Sportiva Vanguard, wide-open GS turns on a big face, and driving high-fat powder skis are in its nature. The rigid 130 flex will thrive on even your largest pow planks. However, it will surprise you on the way up with its generous 63 degrees of cuff rotation. Once you figure out the V-shape cuff and asymmetrical scissor closure system, booting up will be a breeze - even if they spend the night in your trunk. If you are concerned about your carbon footprint, the Pebax shell and cuff of the Vanguard are derived from Rnew 1100 castor oil seeds, which will have you skiing cold smoke feeling less guilty! The thermo-moldable Ultralon performance foam liners will help you dial in the fit, and keep you comfortable all day long. If you want to take your downhill to the next level, but need enough cuff rotation to handle a Wasatch skin track (see: steep), get yourself a pair of La Sportiva Vanguards. 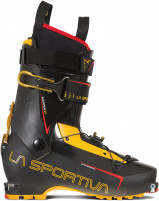 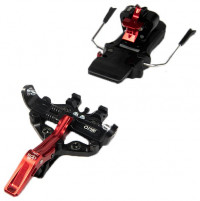 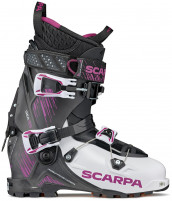 I’ve had two pairs of the Vanguards since they were released. Between the two pairs I’ve put over 90k’ of vertical gain in this winter. I purchased them because I’m a big fan of La Sportiva in general and they have a fairly wide last off the shelf in my size (102.5mm). Despite the wide last, I still had them blown out to 110mm.

Pros: they ski great, the stiffness is exactly what I needed/wanted. The liner is beefy and responds incredibly well to breaking in/heat molding. The ski/walk lever is super solid and locks in with authority, I feel really confident on the down. Range of motion for a 130ish flex boot is the best I’ve tried compared to the other options in this category, it exceeds my ankle mobility on the up.

Cons: Initial durability, on my fist pair the glue for the footbed failed in both boots after less than 3 days on them. Sportiva immediately warrantied them and I have not had any issues with the second pair the remainder of this season with >80k’ of vert and a lot of days on them. The ankle cable buckle broke on my first pair as well. Sportiva is now sending out a hard buckle replacement for the cable buckle. I have not weighed them side by side to compare the weight change, but recommend that SkimoCo stocks/includes these if they haven’t received them from Sportiva. Weight, Sportiva states 1370g for a 27 on their site. SkimoCo’s weight of 1511g for a 27.5 is accurate and 27/27.5 is the same BSL for these boots so that delta should not be as large.

Overall, the durability issues are the same as other new boots I’ve tried in the past and the warranty/replacement process with Sportiva was quick/easy. I highly recommend the boots if you’re looking for an alternative to the ZERO G pros everyone else is wearing that charges hard.
Comment on this review:

can you comment on the fit regarding medial malleolus. It almost lloks like there is extra room molded in but hard to tell from the pictures.
Answer from Ian C
Hi Steve, there is a bulge on the boot cuff to accommodate the lower cuff buckle cable, but the ankle area of the shell itself is average for these boots.
Answer this question:

Any chance you can get a weight for the 26? Also, any ideas on why measured weight is so much higher than advertised for these?
Answer from Jeremy L
Hi Taylor. I weighed the 26 at 1492 grams with the liner in. Not sure why the discrepancy between the manufacturer's and actual weight. Maybe wishful thinking lightens things up?
Answer this question:

The La Sportiva Vanguard is not compatible with GripWalk bindings. However, the Vanguard is ISO 9523 compliant, which means it will work with MNC bindings. If you have further questions, feel free to reach out to help@skimo.co!
Answer this question:

So, how is this boot for...truly...skinning up and then often coming down in a resort. With some basic off-piste bits thrown in?
Answer from Tristan M
Hi Jeff,

The Vanguard has a ton of cuff rotation for a boot in the freeride category. Great on the way up! Also, it will have no problem on hardpack, corduroy, or driving wider skis! It is not as stiff as a resort boot that is 130 flex, but it will give you plenty of power and control.
Answer this question:

Just making sure these boots are still made in Italy I'm fairly they are thanks
Answer from eric
David- These boots are made in Sportiva's Italian factory.
Answer this question:

General: This review is based on fit and flex testing at home. I have not skied it. But I did try it on beside several other boots. It is somewhere between the Lange and Radical as far as flex goes. A little more progressive than the radical, but overall stiffness is the same. The Lange is more boot than either. The radical is more responsive. The fit on la spo is all over the place IMO, this boot fits huge. Compared to my Scorpius I can easily go down a size. It is very wide and pretty high volume. The in-step can be cranked down pretty low like the Scorpius, but when totally backed off I would say it's still medium volume and not nearly as bad as the skorp. The liner quality looks better than both the radical and the Lange.

Walk: I would say it is again middle ground amongst beef boots. Walks better than the Lange, but not as good as the radical. The build quality on the vertical throw latch is quite high and confidence inspiring. Regardless of fit and funky tensioning systems, it is a highly engineered and well-built boot. The sole indoors feels very grippy and based off my experience with other la spo Boots, I suspect it's great.

Cons: It uses the effective but finicky forefoot tensioning system that the Scorpius uses for better or worse. You can be the judge on if you like that or not, but regardless of what you think, the ultra-thin cables and having to place them into the tiny holes to dial a fit is just not as simple and confidence inspiring as the Burly buckles on other beef boots, regardless of if you only have to set them once or twice. I also found placing the upper buckles into the walk slot which is the end of the buckle and then getting them to appropriate tension for downhill skiing is a process, a far cry from the single throw effectiveness of the radical. It was moderately challenging just with my fat fingers and I really would not want to do it when it's puking snow and things have potentially gotten iced. They also got rid of the trab quick step which is unfortunate because that was also an appeal for the boot at least to me personally. Also placing three boots side by side. The actual cuff height is the same. The vanguard is perhaps very subtly higher on my shin, but it's definitely within a centimeter or two of the radical and I did not feel it provided in advantage even though I have a pretty long tibia.

Overall, as I've said in other reviews, between these three boots I say get what fits. Lange is most high volume and most powerful, and walks the worst but still pretty good for a four buckle. The vanguard is kind of an in-between all three, but in my opinion is inferior to the other two if you can fit one of the others better mainly due to the overly complex tensioning system. The radical fits the smallest of the three but is still traditionally pretty wide and it has a fairly low instep in my opinion. However, I have found that putting in a different liner makes it way more comfortable around the ankle joint because most of my pressure there was related to the fact that the liner simply doesn't exist in that particular area. It walks the best of the three, but is the least progressive offering a very quick 0 to concrete wall type of stiffness. It's a pretty good time to be alive as far as the different types of fits and quality that are available in modern boots with way less compromise than in years past as far as ski ability to walkability.
Comment on this review:

Super curious to find out how this boot fits and skis compared to Sportiva Skorpius!
Answer from Tristan M
Hi Travis,

I had the opportunity to take some laps in this boot last spring! Here are my thoughts on the fit in comparison with the Skorpius:

The forefoot of the Vanguard is significantly wider than the Skorpius. Additionally, the Vanguard liner has very thick foam in the ankle pocket. Out of the box, it will feel tighter in this area than the Skorpius. I personally found it quite snug. However, a heat mold will change the fit significantly. The Skorpius is known for its lower instep height. I found the Vanguard’s instep to be comparable. Additionally, I found that both the Skorpius and Vanguard have pretty snug heel pockets. If you would like to chat in more detail about your specific fit situation, reach out to us at help@skimo.co!
Answer this question: