The Magico poles are hybrid adjustables that are stronger than most. Ski Trab integrated Kevlar into the coiled carbon fiber lower to add a second layer of strength where you need it most. The coiled design is meant to provide these poles some give before they catastrophically snap, like some fiber poles, and the dual construction offers the benefits of two ultralight and strong fibers. The upper shaft is 16mm of worry-free Ergal aluminum. They are combined with a geared snap-lock system that’s as reliable as you make it. The impressive design continues into the baskets, which are toothed to add extra grip and are flat in front so the tips aren’t pushed out of hard snow. A great all-rounder.

Update 2019/20: Ski Trab gave these poles a new coat of paint, but otherwise they remain the same. 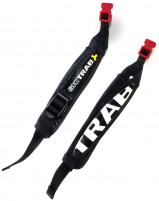 Hi, I finally purchased some Magico poles. I cannot get the straps to release. For that matter, I can't figure out how they would release and there are no instructions. What do I need to do or push to activate the release? Thanks
Answer from Tristan M
Hi Mark,

The Magico poles do not have intentionally releasable pole straps. you could certainly get them to come out with enough force, but you would inevitably break something inside the handle. If you have further questions, feel free to reach out to help@skimo.co!
Answer this question:

The Magico has a segmented adjustment so the absolute max length is 145cm, no? Comparing the Magico, Dynafit Speed Vario 2.0 & G3 Via, which is stiffest at their MAX length? Need to double pole frequently so stiffness is paramount. I see the Dynafit is not in stock. Cheers, Russell
Answer from Jeff
Russell, I did some flexing. The Magico goes go to 145cm and all others say STOP at that point. It was pretty close between the G3 and Magico, but the carbon lower of the Magico seems to break less then most other carbon lowers. I compared to the BD Traverse too for an Aluminium comparison. Carbon is a bit stiffer.
Answer from russell s
Jeff, Thanks for the feedback. I have the 2015 Black Diamond Pure Carbon. It is same as current Carbon Whippet. It is HELL FOR STOUT. None of the current crop of adj. poles come close in stiffness. I hope I'll get several more seasons out of them. Really want a pole which has max official length of 150-155 cm and is stiff.
Answer this question:

Do the Magico Poles have a quick release straps?
Thanks
Answer from Trace Leches
Hey Mark! The straps are quick-release but they have a ton of glue built into the release mechanism for some reason. So yes, they're technically quick release, but the glue needs to be broken in order for the release function to work. It's not terribly difficult to break the glue, but some have more than others.
Answer this question:

Are you carrying the Magico poles this season....do not see them.
Answer from jbo
Hi Gareth, yes we are expecting them in November.
Answer this question:

When will you be getting these in again?
Answer from Trace Leches
Hey Gareth! The plan is to stock up again, but it will be in a 17/18 season order that will likely be here around August or September! Keep your eyes open though, these poles are awesome!
Answer this question:

These are an excellent pair of poles which I've put through the ringer bushwhacking, on lengthy approaches and exits, and breakable crust etc. The pole grips are nice and soft and unlike many molded rubber pole grips they can slide easily between your pack and back and are easily maneuvered without getting caught on clothing or ski pack material and straps. The pole wrist straps are really light and thickly padded, they are easily removable with a quick release button on the top of the pole. The only downside I can see to this is if you like to manipulate your bindings with your pole handles the wrist strap could possibly pop out accidentally, otherwise it's a clever way to quickly place or remove the straps. The flicklock appears to be a smoothly operating strong camming wheel which can easily be tensioned while out, it's a sturdy brass screw that accepts a flat / straight edge. The upper shaft is sturdy aluminum and the lower is a lightweight carbon that appears to be stronger than any other carbon poles I've used (Dynafit Manaslus and Broad Peaks).
Comment on this review: