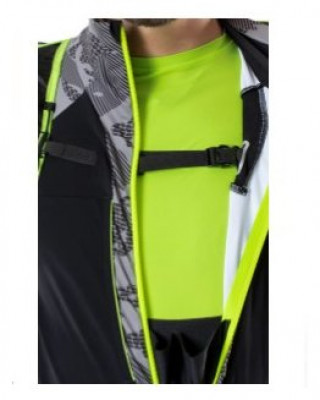 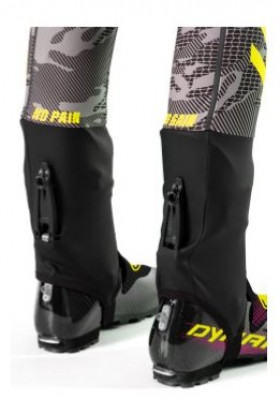 We want you to go fast, you want to go fast, the DNA 2 racing suit wants you to go fast. This athletic fitting race suit will quadruple your speed! Okay, maybe not, but you'll still look good going fast, and that's nothing to complain about. The DNA 2 suit is a technical and sleek piece of attire made to be extremely mobile and breathable. There are plenty of pockets placed on the upper torso of the suit for easy access to race-day essentials. Knowing you will want to track your progress and vitals, Dynafit put a slit in the material on the sleeve so you can watch your watch. The 4-way stretch material in the suit that includes reflective highlights down the legs shows that this suit was made with safety (and comfort) in mind. The real standout feature is the covert integration of your backpack's chest strap through the suit's fabric. This enables you to zip the suit open and closed to stash your skins without having the chest strap get in the way; no more fumbling with a buckle on every transition! There is also reinforced material below the calf that can be cut for quick access to your race boot's ski-walk lever. If you need any more convincing for how rad this suit is going to make you look and feel, the calves read, "NO PAIN, NO GAIN." Shamelessly flaunt your natural ability to be better than your competitors with the athletic DNA 2 Racing Suit. 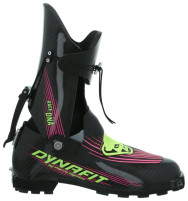 This is suit for man? or unisex?
I have 6 feet 2 inches and 194 lbs
XL is good size for me?
Answer from Teddy Young
This is the Men's/Unisex suit, and here's a link to the Women's race suit, which are you interested in? According to the Dynafit Men's apparel size chart, the XL size may be a good option for you! Unfortunately we're out of stock for this particular suit currently, but send us an email at "help@skimo.co" and we'll be happy to help you find the right suit for you!
Answer this question:

Thanks for the questions. I'm basically the exact same size as you & I think the medium would work well. You'll be going extra fast in no time. And yes, those cuffs will work with the Alien RS!
Answer from TJones
Thanks for the response Will!
Answer this question:

Five Stars because … any skimo race suit deserves Five Stars! Plus some other nice features too. Although of the half-a-dozen one-piece suits I’ve owned from almost as many brands, and also a whole bunch of separate tops & tights, they all have some pluses and minuses. (And like almost all Dynafit race clothing I’ve owned, this suit is almost totally different from everything else from Dynafit – do they retain a new designer or contractor for each new clothing item?)

First, to get the negatives out of the way, no hood, although that is a very rare feature these days.

For the neither-here-nor-there, the color scheme is edgy without being excessive outrageous – except for the absurd slogan on the calves, but fortunately that can be hard to see since it tends to fold up as it is positioned on the top of the rear boot cuff.

For the basics, typical nicely proportioned fit of race wear, although just remember the dual sizing, so I’m in a Size U.S. Small at 5’8” (in theory) and 145 lb (ditto), but the garment is also labeled a Euro Size 48 Medium. Dual-direction zipper has very smooth operation, and both pulls are easily grasped.

The integrated gaiters are very nicely designed, although you have to cut your own slot – but fortunately a little cutting outline is provided on the inside (with extras for the Dynafit side-throw), and the slot for a vertical lever can be cut with just one snip from the inside while folding the suit in on itself. Standard zippered pocket on the inside for your avy beacon (or key fob), with the usual dual kangaroo skin pockets. On the outside, perfectly sized pouch-style pockets, deep enough to be secure even for a phone (just don’t take a big digger!), yet not so big as to cause problems with rummaging around. And super extra bonus mesh pouch pocket on the back, slightly below the waist, perfect for stowing some extra gels. (Just don’t put anything mission critical in there, unless you’re wearing a jacket over it provide additional security for the pocket.)

Special features, the slits for a watch, at first I thought they were thumbholes! And that’s what I’ve ended up using them for, since they’re on the underside of the wrist, yet if I want to use the integrated HRM on my Garmin fenix 5x, I have to wear it on the top of my wrist. So as usual during cold wx I strap my watch to the outside of the suit. But those slits do work nicely as thumbholes, yet don’t bunch up with the temps warm up and you wear the suit as intended.

Chest slits for pack straps, those do look cool, but you have to cut them, which I couldn’t bear to do for a new suit in that prominent a location. And reflectivity, based on inside tests, all of the neon yellow/green is going to look so wild in other skiers’ headlamps that this suit will always be my choice for pre-dawn patrols!

[Picture from some rather thin October skiing.]
Comment on this review: