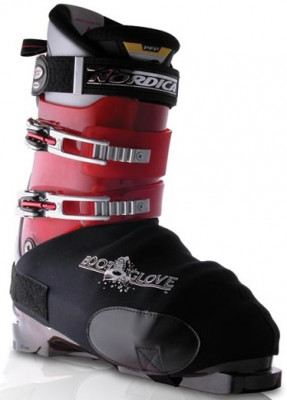 Light ski boots tend to be made with thinner plastic and liners. That means you have less material insulating you from the cold. Instead of going heavier for warmth, just slip on some hip boot gloves. These neoprene insulators have simple elastic Velcro straps that securely wrap around a ski boot to add warmth. They block the wind and trap air which acts as insulation. The Boot Gloves are made by Dry Guy and come in three sizes. Perfect for before and after races or while standing in snow to build anchors. Or just when it’s fricken cold out.

Rather useless other then protecting the boot from scratches . Once it gets wet, it freezes and then provides zero insultation value. How does it get wet . The snow melts form the heat coming off the boot .
Comment on this review:

I use these regularly on cold days in Colorado and Washington, including some hut caretaking. They are easy on/off, and pretty durable so far though the bottom webbing does wear a bit from snowmobile use and climbing around. I use a medium on both 25 s/lab x-alps and 25.5 pdg and the fit is good.

My only longevity issue so far is that the Velcro back strap is shedding a few long threads, but after a couple seasons of use, it isn’t too bad.
Comment on this review:

I have carbon race slippers that are size28.5 but they are narrow and low volume and the tip to tip BSL is only ~303. (La Sportiva Stratos evo) I don't want loose. Would a medium be better or stick with large? I see these serving double duty as a protector of the carbon on rocky scrambles and traverses and as a warm aid.
Answer from jbo
Hi clarkboulder, the medium should work great on those!
Answer this question:

For years I scoffed at these since they reminded me of the old bulky 1980s "boot muffs" (which would scoop up snow as you skied along with any decent amount of angulation), like so many other totally dorky alpine downhill accessories (e.g., the original Ski Tote).
Plus real Skimo Bros (TM) just suck it up & deal when it comes to cold toesies.
However, my only regret now is not buying these earlier: he increase in warmth is immediately noticeable!
And they work so well with skimo boots that if they came instead with the logo of a skimo-specific company you'd think they'd been designed from the ground-up for our sport.
I did though have trouble manipulating my Alien 3.0 Boa dial when my fingers were in relatively bulky handwear. However, a little slit from some scissors and I had the perfect little opening for the dial.
Reply from Brian H
Brilliant idea! (Need more words….)
Comment on this review:

These are always in my pack, along with puffy shorts, and always on the boots if it's below 0F. Very light and compact. Amazingly warm for the weight. Some snow can get stuffed in, but the are so easy to take on and off, it's easy to remove. I will often pull them out to sit on them if needed. I consider them essential safety gear to have in case of injury or need to sit/stand around.
Comment on this review:

I used these boot covers during a backcountry ski trip to the Selkirks in British Columbia. Temps were about -15 Fahrenheit (-26 C) with wind chill. I used these covers on my Hagan brand ski boots with a toe warmer and was quite pleased with how my feet did. Many people in our group complained of cold feet but me and my buddy who also had was wearing a pair did ok. Feet did get cold but not to the point of tissue damage or to the point where we had to call it and go back to the lodge early. I really really liked having these.
Comment on this review:

Used these on Denali and I still have all my toes. I was using them on top of Dynafit DyNA evos. We did multiple trips above 17,000 ft in -25 degree weather. They made the biggest difference booting in deeper snow. Only issue I had was sometimes snow got packed in under them. Worked great with tech bindings and automatic crampons.
Comment on this review:

On cold days, this is the best $30 you could ever spend. Super easy to use, they hold up really well, and boy do they make a difference in warmth. I've been using them with my Alien RS for the coldest days and my feet have been oh so comfy. #worthit #shouldhaveboughtyearsago
Comment on this review:

I forgot to mention that I used them with my aliens on Rainier, and I had no problems with my automatic crampons. They should work fine with strap on and new-matic ones as well. Every so often the sole strap will collect snow in wetter conditions. It’s not really much of a problem and nothing an occasional pole bang to the boot won’t correct.
Comment on this review:

I get cold feet....just ask JBO before any significant Skimo.co purchase. These definitely help. Simple, light, easy to put on and take off, and during the winter I always have them on or have them in my pack. In my experience, I think the stated sizing is more geared toward traditional alpine boots. I wear a size 25 in the aliens and tlt7. I originally bought the mediums, which were way too big, but fit perfectly for the same sized alpine boots. I’m not sure JBO’s boot size, but I recall he borrowed my mediums for a particularly cold skimo race, and they fit well on his larger boot. The smalls fit perfectly for my above mentioned backcountry boots.
Comment on this review:

I see you recommend the medium for a 23.5 mondo boot. I am skiing a Dynafit TLT6 in that size and am wondering if a small would be a better fit. The TLT6 is shorter than the same size Scarpa Gea and BD Shiva. Would you still recommend the medium?
Answer from jbo
Hi Lynn, the border cases are a bit of a tossup. You could certainly get away with a small on that boot. If you go with the larger size, it may be a touch loose at the bottom and there is a chance you need to trim a bit near the ankle joint to avoid impingement.
Answer this question:

hi, my wife has a 24.5 scarpa f1 womens, would you recommend the small or medium? i know the bsl on the f1 is a little shorter than others.
Answer from Trace Leches
Hey Anthony! I'd still go for the Medium! I wear a 24.5/25.0 race boot and use the Medium! There is a pretty solid amount of adjustment range on the gloves though so in theory you could get away with a small, but you'd end up with partial coverage which would pretty much defeat the purpose of trying to warm your feet up!
Answer this question:

I purchased these last Spring to use for cold starts on single and multi-day ski tours (camping). So far, I have only used them skinning and skiing on about half a dozen day tours with single digit to -10F temperatures paired with TLT6 27.5 mondo, 297mm BSL. The mediums fit fine and there is no interference with my tech bindings or automatic crampons. These keep my toes from going numb on cold outings. They are light, compact and easy to use. I've used them at the start of tours , all day, and at the end of tours when temperatures were plummetting. Yesterday was a perfect example. The trailhead was -10F in the morning. I hiked up into the sunshine and later removed them while ski touring in intense solar. Then I had skied down low into a frigid North aspect basin, transitioned and began skinning up. After 1000 vert of climbing without the boot gloves, I noticed my toes were on the edge of numb and the daylight was waning. I stopped, put on the boot gloves, an extra layer of clothes, and continued another 1000 vertical feet to the top. My toes felt comfortable within 5 minutes of donning the boot gloves on that last push to the top and all way down the 2k descent back to the trailhead as dusk approached. They have earned their right to make it into my ski pack!
Comment on this review:

Hi Guys, are you able to ship this product to New Zealand, (Dryguys Boot Gloves)
Answer from jbo
Hi Murray, sure can. You will have a few shipping options at checkout based on your location.
Answer this question:

Will these work for tech bindings for skinning and skiing? Will they stay fixed to the boot and be durable when booting on mixed terrain? Or will the fabric underneath get destroyed? Does length of automatic crampons have to be readjusted to fit boot with extra fabric of boot glove underneath? Do you recommend the medium for 287 and 297 BSL's?
Answer from jbo
Hi Scott, yes they work well with tech bindings and can handle booting. Strap underneath is webbing which lasts a good while, though isn't necessarily designed for rock encounters. Not much crampon interference underneath, possibly some in rear depending on the model, though you can wrap the glove strap on the outside of it for a secure fit. Go with medium, yes.
Answer this question: