Fish grow bigger when they eat other fish. X-Fish grow bigger when Movement bows to the demands of addicted skiers who want even more. The “race plus” line of skis from Movement might someday have the biggest Fish in the sea. For now, we are psyched to have an even more versatile tool in our arsenal. Expanding the waist of the highly-acclaimed (and highly useful) Gold Fish, the Big Fish will leave no snow un-skied. With slightly more waist and slightly more rocker, the ski may be slightly more addictive. The advanced carbon fiber wrapping process of the X-series make the lightweight ski rigid enough for the most demanding ski mountaineers. With a host of lengths to choose from, everyone is bound to catch a Big Fish-X that is right for them.

I have got these skis (174cm and 116-78-97) only recently and skied them for 5 days in a variety of conditions each time (with Dynafit TLT6 boots). They are definitely light on the up and feel more like a skimo race ski than a touring one.
As for the downhill performance, their shape (bigger shovel and narrower tail) makes them easy to float in powder, they were cutting well through breakable crust and wind slab, and skied reasonably well on groomed hard pack although there was some chatter. I would rate them 4.5 so far.
I switched to these skis from Atomic Backland UL 78 (175cm and 114-78-104) and while both are very similar in their performance the Big Fish does better in powder or deeper snow - they are easy to float even in forward leaning (more aggressive) position despite the narrow waist.
I have them mounted with Dynafit Speed Radical toes and Plum Race 170 heels as I like that combo for a variety of reasons.
Comment on this review:

How do these compare to the X-Alps generally? (Thinking 169) Would want to use for general monkeying around, light long missions - no racing.
Answer from eric
Aaron, This ski is much stiffer and more demanding than the X-ALp ski. If you are bigger or more aggressive skier than this would be great choice. Very precise and considering the stiffness, easy to initiate turns with. It skins and kick turns really well. Movements mounting point really makes the ski easy to maneuver in tight chutes and such.
Answer from AARON O
thanks, so 5'9" and 149 lbs, not my ski I don't think
Answer from Jonathan S
We're almost the same size and I absolutely love my 160cm pair.
Answer this question:

Hey SkiMo, what would you say the skin options are for these skis? The 77mm waste makes some of the skin by roll too narrow. Thanks
Answer from Trace Leches
Hey Buster, there are tons of options available, just gotta do a little bit of digging to find them. The Colltex PDG in 80mm works great on this ski if you want a mostly straight cut race skin. Otherwise the Ski Trab WC Race Roll is a great option in either 75mm or 95mm depending on how you want it to perform! The matching race skins from Movement are a great option well! Beyond those options you're looking at a full coverage skin in either bulk or a kit.
Answer this question:

What size of these should I get? I'm 6'1", 210 and switching from 20 year old tele gear to skimo setup to do some racing.
Answer from Trace Leches
Hey Matthew. Fantastic, you'll have a good time on these. I'd say it depends on how much racing you'll be doing. If you plan on using them for racing exclusively, then get the shortest length you feel comfortable on, but I'd advise the 168cm ski. The Big Fish is very easy and natural to kick-turn, so even though there's a bit of extra length, it won't be a whole lot different than a full-blown 160cm race ski, but will offer more flotation and a more stable running edge on the way down.

If you plan on using them for a few races a year, but will also be using this primarily as your touring ski, then the 174cm makes a lot of sense, especially for spring skiing.
Answer this question:

First impressions: skied three runs in storm conditions with several inches on top of refrozen spring ruts. Wow! Skis could hold a line in a longer radius turn and floated better than the Goldfish (which I also love). Both skis are 168cm and I'm 5'11, 168#.
Comment on this review:

I've skied these for the past few months mainly at the resort but so far I've been really impressed at how stable they are at speed and how well they hold an edge for a really light touring ski. The skis walk the fine line between race ski and touring ski, they'll ski better than a 160 length 65 mm waisted ski and they're only slightly heavier. The bases seem to be rock hard and fast and the top sheets are still in good condition. They replaced a pair of Dynafit Broad Peaks and these are substantially lighter and possibly a little bit stiffer. I haven't had these out off area yet but as spring conditions set up and I get a chance to take them out I'll update this review
Comment on this review:

Overall: Five Stars for barely more weight than many race skis yet with a relatively substantial 77mm waist.

Background on product familiarity: I’ve used this ski so far for a single test outing, in the 160cm length, mounted with Dynafit Low Tech Race “1.0” (i.e., older version with the tripod heel three-screw mount), driven by Dynafit RC1 boots (size 26). I plan to use these for long outings in the late spring and early summer where I would have previously used my Hagan X-Race, Hagan Cirrus, or Trab Magico. Other skis I’ve previously used with a 70s waist width include the Trab Duo Sint Aero, Hagan X-Ultra, and some of the many incarnations of the Atomic 9.22/R:9 design.

First, the first impressions out of the wrapper: The sidecut depth is on the more curvy end of the spectrum. But the tip > tail differential is fairly high so should avoiding “hookiness” in potentially tricky snow. The tip has noticeable rocker / early rise, with a race-style skin notch that is angled to provide extra security. The tail is fairly flat.

Second impressions, in use: Edge hold was very impressive on moderately steep resort ice. None of that carbon chatter. The only unconsolidated conditions during my test outing were large heaps of damp loose granular, but I was still very impressed by how the slightly rockered tip easily plowed its way through. And overall, felt much more stable and secure that I would have expected from the 160cm length.

Third impressions, for long-term durability: I can’t pass judgment on that yet, but my old Movement Fish-X was still in almost perfect condition after almost half a million earned vertical feet. (My old Logic-X is also still in great shape, but far less usage.) The Big Fish-X also has a fairly beefy cross section (i.e., unlike some other lightweight skis that are very thin) and relatively thick edges.
Reply from Jonathan S

Update now with ~40,000' vertical: the smile in the attached picture pretty much says it all! My initial impressions of a stable and secure platform (despite the 160cm length) have been confirmed while on 45-degree corn that has not always been as soft as I would prefer. At the other end of the spectrum, the 77mm waist coped reasonably well when some new snow featured a mank line that was rapidly moving up in elevation throughout one morning. And for conditions in between, perfect!
Reply from Jonathan S 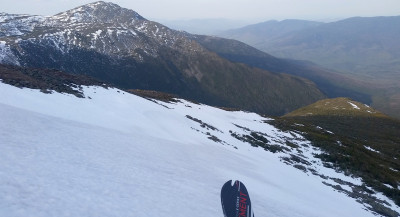 Checking back in now after ~134,000' vertical, this is one of those skis that I loved at first and since then have grown to love even more!
The only drawback is that I've mainly been reserving them for very long tours where they also have to spend some time of my pack, given that they're barely heavier than a race ski, and noticeably lighter than other ultralight skis in my quiver.
(Picture attached of an overnight hut tour this past May -- the lack of snow in the background provides a hint at how much time they had to spend on my pack!)
Yet they ski so well even in variable conditions, and they are so surprisingly stable even though I went with merely a 160cm, that they deserve to be skied far more often than I've been using them!
Comment on this review:

Hi, im between big bish and atomic ultimate 78, for 20%racing, 50% speed touring in the mountains and 30% big traverses with some off piste like Chamonix Zermatt..
-Any recomendation between both?
-big question is about size 160cm for the movement or 169? Im 1,72cm tall an73kg weight

-Last is cheked weight for ultimate 164?

Thanks a lot
Answer from jbo
Hi Gaby, tough call, both great skis. The 160 length Fish is probably too short for you. We have the Ultimate 164 at 1035g, which would be a good ski for your traverses, thought probably also still short. The 168 Big Fish would save you about 100g and give a better length for the downhill. It would be the best for the racing portion as well, given the lightness and mounting location marked for the toe pins.
Answer this question: