Colltex invented the adhesive climbing skin in the sixties, and they continue to produce amazing skins that are chosen by guides and companies such as Atomic, Movement, and Ski Trab. The Mix formula is a workhorse blend of 65% mohair and 35% nylon that gets you up the hill reliably. With the abrasion resistance of nylon and the glide of mohair, the Mix is a great all-around skin for every day touring.

Update 2018/19: Colltex started calling these skins Tödi after a massif in Switzerland. 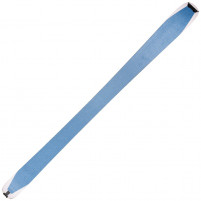 I have a pair of BD Helio 75 that are 171 cm long. Can I make these work in the 161-170 length? If not, do you have a recommendation?
Answer from eric
John- I tried this skin with a BD ski of same length and it was too short to work. Looks like if using colltex skins you need to be in their size range.
Answer from John S
Thanks for checking on that!
Answer this question:

Can this Colltex be stored glue to glue?
Answer from jbo
Hi Randy, yes, it can be. Note that Colltex recommends using the included netting since the self-adhesion can be pretty strong, especially when the skins are new. Love gloves also work to ease pulling the skins apart from themselves. As always, use a skin saver for long term storage.
Answer this question:

I have a pair of Scott superguide 105, 175 cm. What size coltex mix skins will work. Thxs
Answer from eric
Joe- We suggest buying your skin width based off your tail width. Then trim the center to fit perfectly.
Answer this question:

Hi ,
I am looking for a Colltex skin , that I believe is used for the custom skins on some of the Volkl skis, particularly the Volkl VTA 98 . I ski with a friend that loves the skins, but alas , I do not have the hole in the top of the ski to fit the custom . My question to you is , do you know if these are the same or very similar to the custom Volkl products? I know the custom Volkl skin is mohair mix. And, do I need to be concerned with a slight rocker with these skins? I have been backcountry skiing for many years ( telemark) , various skins. Most recently , BD glide lite mix , grips well , glides well , does not fold small , but the worst part, I am the only one in my group of skiers that has skin failure, really cold snow and snowing , or , really wet spring conditions ,they will not hold for laps , and must be eventually be strapped to the skis to climb SO needless to say , I am being very careful in selecting new ones. I am very careful , even stopped ripping the skins off so as not to hit a tree or snow unless it is the last lap. Also , take out a microwipe to dry the base, no help. Any ideas? The season has begun! Thanks
Answer from Trace Leches
Hey Fern! Not sure if these are the same skins that Volkl uses or not, but this is one of the "highest-tech" skins on the market and is waterproofed to the gills, which will help keep the glue dry and tacky throughout a long day. The Black Diamond skins are awesome and have very sticky glue, but there's not a whole lot in the way of waterproofing with those skins, so unless they're treated very carefully with waterproofing/glide agents, they have a tendency to soak through on long days.
Answer this question:

Thanks,
Melissa
Answer from Trace Leches
Hey Melissa! Totally possible that it'll work because each ski manufacturer measures their lengths a little bit differently and most skin manufacturers build a few cm's of wiggle room into the skin lengths (for example, the 161-170cm skin might actually be something like 159-172) so it could end up working. Probably equally as possible would be finding out that they're still too long and you'd have to end up trimming the skin to the appropriate length and then re-installing the tail strap. Not a terrible worst case scenario, but just know that it might end up happening. We should have more sizes in stock within the next few weeks.
Answer this question:

Would these work (end clips) with a split board?
Answer from jbo
No well Lorien. You could replace the tails but probably easier to get some splitboard specific skins.
Answer this question:

These are my first mixed skins and I'm impressed. For the money I freaking well should be impressed, but these really are worth the extra few bucks if you can afford it.

I trimmed mine with a sliding G3 tool that I like much better than the letter opener style so I can't comment on the one that's included, other than I like G3's better. It looks identical to BD's, which I hate using.

One of the first things I noticed: these things are sticky! Holy crap! With age and abuse this has tempered a little, but they're still noticeably stickier than my BDs and way stickier than my G3s. The attachment system is bomber, and works well. Glide is great and the feel just as grippy as my G3 nylons. Grip on my BD nylons is better, but glide is much worse. Decent technique will get the Colltexes up anything that other brands will get up.

Durability seems good, although I coddle them more than my cheaper nylon skins. After a season and a half they are still going strong and the glue is resisting balling quite well. Definitely top of the line skins, and probably worth the money. That said, if you have to go cheaper, don't think you'll be missing out on a life altering skinning experience either.
Comment on this review:

Overall: Five Stars for a climbing skin with typical Euro momix glide and atypically strong glue. My only caveat is that the laminate is so subtle as to render them more prone to “rats-nesting” when combined with the strong tack, although this is a concern only if you’re already in the habit of making a mess of your transitions on windy ridges.

Background on product familiarity: I have almost 43,000 vertical feet on a 2013-14 Movement-rebranded pair precut for the Movement Response-X and another nearly 44,000 vertical feet on the same version trimmed down slightly for the Hagan Y Flow. Previously, for (too?) many years I had been wedded to a certain line of purple and then orange skins, but my Manaslu skins in 2008 helped wean me away from that habit to a current assortment of various momix skins for all my touring setups.

First, the first impressions out of the box: If you’re accustomed to a certain orange (previously purple) skin, then these Euro skins will seem very different with their slippery plush, very subtle laminate, and glue that is . . . extremely tacky?!? And given that the glue on that ‘Merican brand has recently been moderating its tack, these skins might have the strongest glue on the market.

The metal tip loop is rather old school but with a twist – or more literally, some clever bends to enhance fit on a wider variety of ski tip shapes. The tail strap is laminated into the skin for zero drag on the snow, although the camming clip is a little bulky, with a continuously adjustable length.

I trimmed down one pair to a very precise edge using the very basic little BD “letter opener” tool, which appears to be identical to the Colltex-branded version. Some mohair debris did end up on the glue, but that might have been my own sloppiness at fault.

Second impressions, in use: The metal tip loop attaches mindlessly and securely to both the rounded-off tip of my Movement Response-X and the more pointed tip of my Hagan Y Flow, yet allows for clean rips without getting hung up.

The tail strap’s cam also attaches easily, and then allows for a secure grab for ripping. The cam’s length adjustment has just the right amount of tension for adjusting inside, but has too much resistance if you want to be adjusting it constantly in the field for the slight length changes that result from temperature, snow moisture, and repeated applications. But the tail attachment is mainly there as a backup, and as a grab for ripping, so a little looseness doesn’t cause any problems.

Overall, I liked the tip and tail attachment system so much that I never got around to my original plan of replacing it with a race-style setup on my Y Flow skis to take advantage of their notched tip.

The glue is so strong that on a tour with temps around 0F at my skin>ski transition and not much warmer over 2,000’ vertical below at my ski>skin transition, I skipped my usual habit of rewarming the skins inside my jacket on the descent. The tack was still excellent on subsequent laps, without even a hint of the cold temps that the skins were battling.

The only downside of that strong glue is that combined with the very subtle laminate (and without any “wimp strip” down the middle), the skins are more prone to “rats-nesting” than average. I probably lost only a few seconds on each transition with this. But if you’re already in the habit of making a mess of your transitions on windy ridges, then you should probably seek out some combination of a more “boardy” skin and/or more forgiving glue.

Glide is excellent. I’ve heard complaints that momix skins don’t grip quite as well as nylon skins. Perhaps true, but I’ve never noticed any differences, even for steeper-than optimal skintracks. (And if you’re constantly trying to take as steep a skintrack as possible, while using the highest heel elevator setting on touring bindings, then learn how to set – and love – a lower-angle and ultimately more efficient skintrack!)

Third impressions, for long-term durability: Not enough usage yet to pass judgment based on personal experience. But the tip loop is impressively bomber, and the tail attachment also looks durable. (I have an earlier incarnation of the tail attachment that is still in perfect condition after over 195,000 vertical feet.) As for the plush, my experience with other brands is that the momix fibers seem to last pretty much forever (unlike the noticeably fast wear rate of pure mohair). The thinner laminate might in theory be more prone to tearing if you like skinning through rock gardens, but I haven’t experienced any problems (although my skinning with these has been almost exclusively on snow).
Comment on this review: