Atomic changed the name, but not the singular purpose. The Backland UL 78 is a ski mountaineering weapon. The ski is capable of slicing and dicing on hard snow, while remaining playful in soft snow due to the lightly rockered tip. The double-carbon construction is reliable on the steeps and the ultra-light wood core helps you get it done. The Backland UL series features the same Step-Down sidewall that proved durable in the Ultimate line of mountaineering skis. The tip has been redesigned to help it cut through rough patches, but otherwise the ski remains a workhorse. The Backland UL 78 is a safe bet when you’re skiing not-so-safe lines.

Update 2019/20: A graphics update on the top sheet hints at features to come. Ski remains the same.

Update 2020/21: Atomic released an updated ski under the name "Backland UL 78", which you can find here.

I'm seriously looking at this ski in the 169 (I'm 5'10", 170lbs) for everything from Spring couloir missions to resort uphilling and wonder which skin is best. I've read the reviews for the Atomic skins and am not impressed. What else are folks using? Which skin should I get?
Thanks in advance,
Dan
Answer from Lbow
Dan, Probably the best thing to do is buy some skin material off the roll and some race tips. Then build yourself some skins cut for those skis. We like the Ski Trab material off the roll, but you can never go wrong with Pomoca too.
Answer from jbo
Hi Dan, quick note about the Atomic skins. There are two flavors, one with hybrid glue and one with traditional. Some folks aren't ready for hybrid glue since it's not quite as sticky; for them we recommend the traditional glue.
Answer this question: 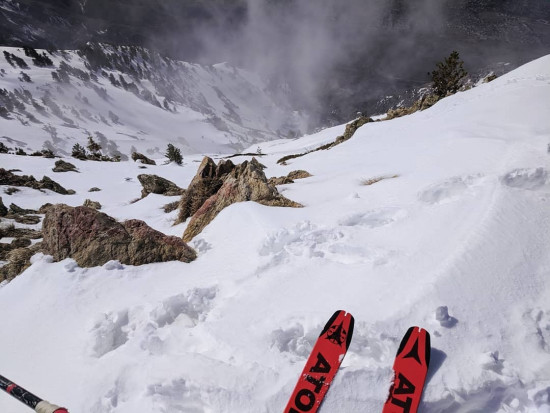 Absolutely adore these skis! Skin like a racer, ski big lines. They've been with me for 10k ft days on glaciers, couloirs in July, blue ice... This is my serious ski for serious mountains

Pro: The edge hold is great, the ski is extremely predictable.

Con: they're so light I forget I have them on my back and I have a little panic attack for a second
Comment on this review: 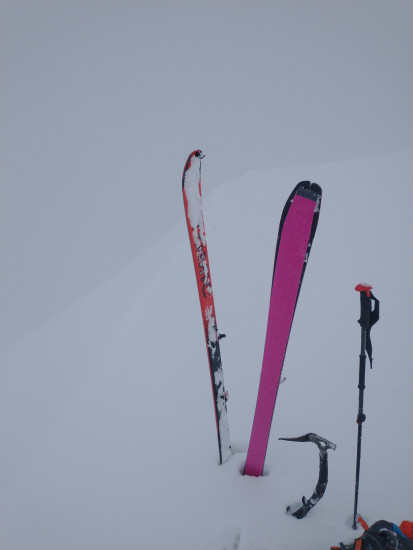 These skis are exactly what I wanted them to be: nimble on the up, fun and forgiving on the down.

I'm not the most experienced skier and my goal is to have long, enjoyable days in the mountains. My previous skis are longer and skinnier with a more traditional racing shape. They got the job done and were speedy and capable, but I really had to work my legs off on the downhill.

The Atomics make skiing downhill feel easy. I'm comfortably linking turns on terrain I wouldn't have touched a year ago. I think that they are perhaps not as fast as the longer skis on certain terrain like smooth downhills and skating road, but I'll take it. It's awesome to not be scared and exhausted when things get steeper.

(Caveat: I mounted the Atomics with race bindings that provide a neutral ramp angle compared to the +13mm of my long skis. I think this compliments the ski in reducing strain on my legs.)
Comment on this review:

I am a sidecountry/front country east coast skimo resort lapper and these are Goldilocks skis for this use. I use them with pdg boots and speed radical binders. A bit heavier then 161 skimo race skis but nearly as quick up and waaaaay more fun on down on iced-over dawn patrol groomers, east coast pow and typical iced up chunky junk. 85- 90% of the way to full bore alpine race kit but you know, skimo skis. Carve ‘em, slide ‘em, punch them into a waterbar- they handle it with ease. Great all-rounders!!! Especially at this price point.
Comment on this review:

I debated how to review these.....but I'll just say WOW!

In summary: They punch well above their weight, hold a fantastic edge, allow for varied turn shapes, and are forgettable when you carry them on your pack!

A couple more details: I'm 5-10, $1.65 and went with the 169, which is a little shorter than my normal lightweight Spring/Summer set-up (Current K2 Wayback 88 in 174cm). Mounted them with a Ski Trab Gara Titan Race binding, currently skied with Fischer Travers.

I used these throughout this late spring and summer here in the PNW on the usual trade routes and some lesser known hike-to marathons and was simply blown away by how well they skied for a ski weighing only ~1kg and coming in shorter than my usual ski length. They were effortless to bring around on steep terrain and held a great edge. The turned up tail seems to really help here. Skied plenty of funky snow types as well and while they get kicked around a bit as they are a smaller ski, they do so in "dare I say" a highly predictable and manageable way. But also when cruising down relaxed slopes and hero corn, they were still a pretty energetic and fun ski that allowed me to vary turn shape and how hard i drove them from the tip. With a heavy pack, I'd probably be happy to size up, but even at 169 it wasn't exhausting, especially when realizing how fun they were to ski when the terrain was steeper. Obviously haven't had them in soft/unconsolidated, and would imagine they are much less effective, but with the reasonable rocker in the tip, I'm sure i could do it, but personally I prefer a long wide board when our wet/heavy comes back.

Full endorsement for PNW mountaineering season!
Comment on this review:

The graphics are made to simulate the HRNZ feature. I bet it will be added to next updates.
The 78 UL is part of my new setup, still waiting to taste it in deep.
It feels solid, I'd say a very good "classic" lightweight all mountain Atomic (around 1070 grams on 169) , moderate 1/6th tip rocker, quite stiff, with very uniform flex from tip to tail. Tip and tail very slightly higher than others, easy round tail. Full front and rear mounting boxes for all kind of bindings (wide or smallish).
I was looking for a ski for our "extreme" conditions (most times hard and iced snow).
The only thing I dislike are the graphics! Too dark and loud. I`d say the graphic designer hasn`t worked much on it... :D
Reply from jbo
Hi jim, you were right, Atomic added the HRZN feature to the 2020/21 version. Good call!

Thanks in advance!
Sam
Answer from Jeff
Sam, they are very comparable. After asking around it is hard to put a significant difference in how they perform. Both great skis. You can use sizing as a possible determining factor. If you prefer a longer ski or want a shorter ski for tight chutes.
Answer this question:

What did Atomic change from this vintage to the 2020 ski?
Answer from Jacob L
Hey Tom. The full product description won't go live until August 1st, and the updated ski won't be available for purchase until this fall. However, here is the partially finished product page for the updated Atomic Backland UL 78
Answer this question:

I have used these for almost every kind of fun: trips light, long, short, quick, slow, any kind of outing over several seasons. I've also loaned them to folks who swear they are the lightest funnest skis for kicking around everything from the backyard to the resort to the skin track to real ski mountaineering objectives, especially if you keep the length short. They edge well, plow through crud well enough and can float pretty well in soft snow, as long as you are not packing weight. They are fun and bouncy edge to edge, hold on ice, and the rocker is more noticeable than other Atomic and similar size skis I've used, and in a good way. I wish I had gotten my skins with a race tip/toggle and would change that if I could motivate. I think this would be the ski I'd feel most secure on whether skinning around the woods or dropping into a tight chute. I use with tlt 5s or 6s and dynafit low tech bindings.
Comment on this review:

Thanks,
Jared
Answer from Trace Leches
Hey Jared! It's mostly a core difference. The UL is a decent amount lighter than the standard Backland. Not sure if it's worth anything or not, but we've skied both versions plenty of times but there's a reason we only carry the UL version ;)
Answer this question:

I have skied these about 20 days in backcountry in various conditions in 175cm (114-78-104), with Dynafit TLT6 boots. Overall, I was very happy with the skis although I found the radius to be a little short for my liking. The skis ski well through crust and on firm or wind affected snow. I didn't ski anything super steep or icy so can't comment on that but they performed well on 40-45 degrees. They seem well built and quite durable.
I would have rated these 4.5 stars but I have recently switched to Movement Big Fish X so I am comparing to those -
it is a very similar on paper (174cm and 116-78-97) but the slight differences add up for me (a bit lighter, flowing better in deeper snow). See my review on that page.
Comment on this review:

Is there a weight limit on this ski? This seems like a good "race" ski for a 200lb + tall guy if run in the 169 length? Could it handle that?
Answer from Nate
Hi Aaron, I'm pretty close to your weight and have been skiing this ski on that length for the last year. It's been fantastic! It's quite a burly, durable construction for such a light ski. Definitely can work as a race ski for a big guy, but it's completely serviceable as a mountaineering ski and mission oriented touring ski, even at your size.
Answer from AARON O
Thanks Nate! In full disclosure, I am actually 150# and 5'9" but a guy I know is your size and looking for a race/light and fast ski and I thought this might be the ticket - good to know your experience has been a good one!
Answer this question:

Just checking here, but this 'step-down' sidewall - it's exactly the same as the new Salomon S/Lab X-alp right?
Answer from jbo
Hi Joseph, the Salomon X-Alp ski doesn't have a sidewall, but yes, the Atomic Backland UL does have a mini sidewall underfoot.
Answer this question: