Now that Groundhog's Day is in the rearview mirror (let's hope Punxsutawney Phil is right when he says more winter), it’s time for Skimo Co’s employee midseason gear review! Normally we’re still skiing powder in February but an unusually long dry spell here in the Wasatch has made the snow go from deep to dire. The only upside to this is that we’ve been able to test out the gear in a variety of conditions. Silver lining, folks! That said, here are a few pieces of thoroughly vetted gear that has been impressing our staff this season.

“I don’t know anyone who doesn’t like any of the Backland skis.”

I bought the Atomic Backland 95 at the start of the season in hopes of finding a do-it-all quiver of one ski, with an emphasis on ski mountaineering. This means slightly damper, easy to ski, more oomph, and able to handle a variety of conditions found on big mountaineering lines. And so far I’m happy to report that it’s done exactly that. It’s proven itself over and over this season thanks to a funky winter. I was happy to have the Backlands underfoot during a descent of Utah’s Little Pine Couloir in mixed bag snow conditions where I encountered chalky snow, hard pack, almost corn, and other crud. I pair it with the Dynafit Superlite 150s and Dalbello Quantum Free 130 but think it could do well with the SCARPA F1 LT as well. It really is a great everyday driver. You can’t go wrong with it.

"Whether on a long and technical ski mountaineering route - or just a morning dawn patrol - this helmet has you covered."

I was finally ready to ditch the old alpine helmet for a touring-specific lid. When it comes to ski helmets, dual certification is a personal requirement. The Scott Couloir ticks that box at a respectable weight, and comes in a circumference that accommodates my unreasonably large head. The Halo fit system cuts down on hotspots, which I have found great for occasions when you may have a helmet on all day. I have put the Scott Couloir through the wringer, and I love the versatility. It pairs well with a fleece hat for colder weather, or a trucker hat for those sunny days on the glacier.

I’ve also been enjoying the Ski Trab Titan Vario.2. Technically I bought this last season, but a year later, I’ve fully vetted them. In the spring of 2021, I decided to take the leap on a new setup. I was in the market for a quiver of one that saved on grams, but could still handle just about anything. I decided to give Ski Trab’s unique toe design a try via the Ski Trab Titan Vario.2.

Having put the Vario.2 through the paces, I am nothing but impressed. The zero-gapped design and semi-independent toe pins provide pretty incredible retention for a binding that comes in at only about 250g per foot. The riser options are more than enough for modern touring boots, and this binding has held up admirably despite a lot of hard use.

“This isn’t just a nice guidebook to have during a visit to the area. It is damn near essential.”

I just got back from a week-long trip to the area and each night was spent studying the guidebook trying to find the best place to tour based on snow conditions and park closures. Rogers Pass area is massive with lots of exposure, changing conditions, confusing restrictions, and complicated terrain. Needless to say, I can’t imagine doing this trip without Douglas Sproul’s books and maps. He certainly had his work cut out for him when he decided to make a guidebook of the area and while the first edition was good, the second edition is downright amazing. Using tons of high-quality photos and succinct descriptions, the book allows users to figure out where to tour without giving away every little secret. I think it’s the best book on our shelf, but I might also just be biased towards the area.

I’ve also been a big fan of the Dynafit Mercury gloves, especially for someone like myself who runs cold and is constantly scared of screaming barfies. The Mercurys have been on my hands at the start and end of nearly every tour this season unless it’s a really cold day. They’re lightweight and breathable enough to be comfy on the uphill, but also water-resistant and just warm enough for the down. There’s even the pull-out overmitt if you want to get a touch more heat and wind protection quickly without swapping gloves. Perhaps they’ll be too hot to keep on in the spring, but by that point, I’ll just stash them in a pocket and tour bare-handed. Problem solved.

“It’s reliable, it’s confident, and I can ski almost every ski in my quiver with it. It also walks reasonably well.”

Equally at home in the backcountry as it is on groomers, the La Sportiva Vega is the perfect tool for the skier who does both. It’s powerful enough for in bounds action but still walks well enough and won’t feel like it’s weighing you down when earning your turns. I pair the Vega with the Blizzard Zero G 95 and Dynafit Rotation 14. The boot is especially great for folks who are new to backcountry skiing. In a few seasons, they can upgrade to a lighter, dedicated setup if they want to split their quiver between resort and touring. Although, for me, this is actually my second pair since I just recently retired my old pair of Spectres. The two boots are essentially the same but with a few updates on the Vega. So after a quick punch or two, it felt like slipping on a revamped pair of old friends.

“The simplicity on this thing is what’s impressive.”

So nice I bought it twice. After throwing the ATK Kuluar 12 on my DPS Pagoda Tour 112 and being happy with them, it was a no-brainer to put another pair of Kuluars on my new Voile Hyper Chargers. I ski at about a 9 release value so either one works for me and provides full confidence, even when I took them in bounds on a rough day of resort skiing. Aside from the great retention, the design is great. The heels rotate nicely, it’s reasonably lightweight, and their quality construction leads me to believe they’ll last a long time!

“They’re a no frills, no fuss pant. I bought them to keep warm for cold days in the backcountry because I tend to be cold. But I also have yet to overheat in them.”

This isn’t the first time these pants have shown up in our mideason gear review. Last year, Eric praised the Karpos Express 200 Evo Pant for their warm-but-not-too-warm capabilities. I feel the same way. They breathe well so no big worries of being uncomfortably hot in winter conditions. Otherwise, they’re a fairly straightforward pant - stylish, slightly snug but not restrictive at all, and quality construction. I personally opted for the men's version because the square fit of the hips worked better for me but the women's version is the same material and design, just with a tapered fit in the hips.

“I’m able to make use of the space so much more efficiently. It’s a very intentional pack.”

In my first outing I ended up using the various carry functions for my poles, ice axe, and skis, and they were all convenient and reliable. The brain, strap pockets, water bottle sleeves, and backdoor zip access all made it very easy to sort out my stuff, while the shape and structure suited my frame well. Looking forward to putting this bag through the wringer!

“It’s the best piece of touring gear I’ve ever purchased.”

That’s a bit of a bold statement but it’s true. This merino wool top is perfect for efficient touring on normal to cold days. Don't over think it - just throw it over a base layer and you’re good to go. The massive skin pockets are great for stashing water, snacks, and even large skins for 100 underfoot skis. Like wearing a race suit, there’s no need to fuss with your pack. Mild Euro-style makes it fashionable but not obnoxious. Full disclaimer: for wet snow and/or warm conditions, this may not be the best option. But for cold, dry snow east of the Cascades, this thing is unbeatable. It’s rare I have to put on a shell or any other layer while touring. And yes, this also appeared in last year’s gear review. Maybe we sound like a broken record, but I am convinced Ortovox struck gold with this jacket.

“It’s a great layer to bring on most tours and nice to wear afterward too.”

Adorned with the Skimo Co logo, this season’s stretchy custom employee shop jacket was an easy choice. It’s a technical piece that works for most skiers in most situations due to its hybrid construction of impressively weather-resistant and stretchy breathable materials. And in true Skimo Co fashion, it is minimalist in its design with only two zipper pockets for skins, a main zip, and a hood cinch. The rest is stretchy, lightweight material made to go fast! Did I mention it's stretchy? 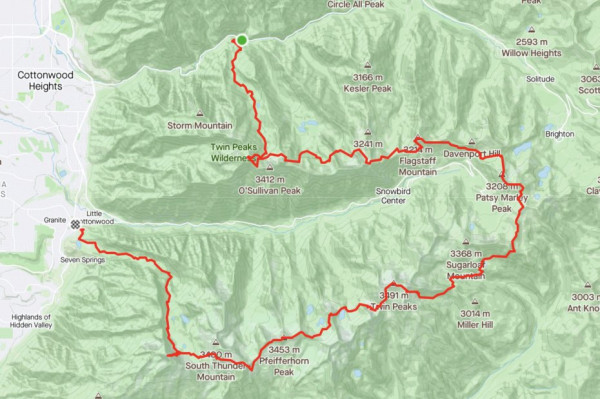 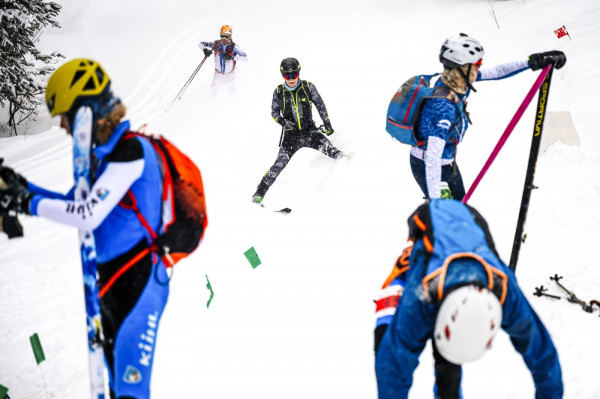