Tuckerman Ravine sits on the eastern side of New Hampshire's Mount Washington and is home to some of New England's most iconic ski lines, from the infamous Headwall to the perennial favorite Hillman's Highway. It's also a glacially-carved cirque -- a remnant of the last ice age, when a thick sheet of ice pushed down from Washington's summit along with thousands of tons of glacial debris, creating the steep-sided steep-skiing paradise we know today. Skiers flocking to Tuckerman Ravine every spring would be right to look at Black Diamond's Cirque 84, a versatile mountaineering ski with a preference for steep and firm. Taking its cue from BD's previous offerings in the mid-fat category, the Cirque 84 uses a paulownia wood core and a hybrid sidewall/cap construction to provide a powerful and stable feel underfoot, but at a much lower weight and with a handy tip notch for quicker transitions. Whether you're dropping into a steep face at corn o'clock, or setting off on the Ortler Traverse, get a pair of Cirques on your feet and get ready to be impressed. 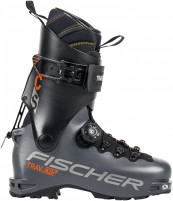 I just found a pair of these used at a good price (178 length). Do you have any precut skins with a tip notch attachment that you would recommend to go with them?
Answer from Emmett I
Hi,

We don't have any for this ski at the moment - check out our off-the-roll skins and some race tip attachments. Building skins from scratch is actually quite simple!
Answer this question:

I purchased a pair of these skis last year and paired them with the Scarpa Alien 1.0 boots. I feel like I'm constantly fighting to stay out of the back seat on this setup. I understand that a lightweight ski and boot setup like this will not hold up as well as stiffer and heavier alternatives, but should I be feeling so unstable on these? Or maybe it's the boots? Or maybe I should remount the bindings to move them forward a bit?

Any thoughts would be appreciated.
Answer from Tristan M
Hi Joey,

There are a lot of potential variable at play here. Binding delta, the forward lean in your Alien 1.0 boots, position on the ski etc. All have an effect. Shoot us an email to help@skimo.co with your boot, binding, and ski combo, and we can get into the weeds on potential solutions.
Answer this question:

What about a comparison of the Cirque to the Voile Objective?
Answer from Brett S
Hey Travis, the Objective is an incredibly easy-going ski and quite playful for what it is. The Cirque 84 is stiffer and would be the better option for consequential terrain where edge hold is paramount. For a breakdown of the specs between the two, please click here.
Answer this question:

How does this ski compared with Blizzard Zero G 85? I want to use it for PNW longer days, like for volcanos.
Answer from Ian C
Hi Lili, two great skis you are comparing here! Both are lightweight, high-performance mountaineering skis with excellent edge hold. The biggest difference is the Cirque 84 will be quicker and more forgiving, while the Zero G 85 will be a bit stiffer. As such, the Blizzards may be a tad more suited towards big turns at faster speeds on volcanoes, but both would be a delight for PNW mountaineering!
Answer this question:

Hi Skimo Co! Would you say that this ski has a pretty similar feel to the K2 Wayback? Thanks for all your help!
Answer from jbo
Hi Henry, not quite. I would say the Cirque is more playful and maybe a bit less damp. It skis "lighter" if that makes sense.
Answer this question:

Would someone hazard a comparison between these and Atomic Backland 85 UL? in a 172/171? Last ski in the category was a Voile Objective...
Answer from eric
Chris-The 2 skis are very similar but the Atomic might be slightly better in various turn shapes. Where the BD has a more distinct turn shape that it likes . Both skis will have more edge hold in hard snow than the Voile but not giving up soft snow performance.
Answer from Chris C
OK thanks! The UL 85 certainly seems like a great all around little ski.
Answer this question:

I previously owned the Blizzard Zero G 85's, in the 185cm length. Those were my resort dawn patrol -> rip fresh cordoruy ski. And my spring/summer glacier rip steep corn ski. I liked them because they were stiff, light, and came in a "real" length.
The Cirque 84 is made by Blizzard, and is near identical dimensions, but it's a very different ski. The Cirque is *much* softer than the Zero G. It's a more forgiving ski, doesn't need to same level of speed to make it work, but it also won't do big turns the same way.
My Cirques are the 171cm, a lot shorter, because for me the Cirques are about cutting weight, long traverses in soft snow, skinning for skinning's sake, etc.
Comment on this review: 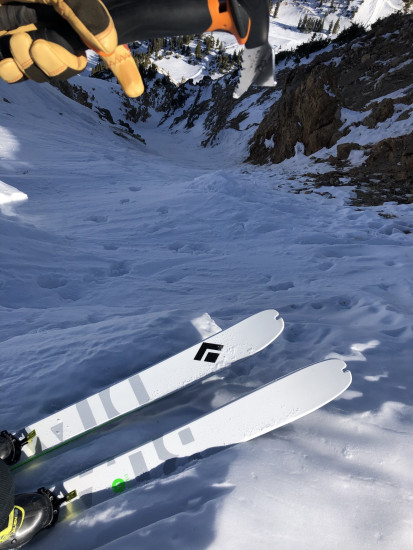 Having skied on the Cirque 84's for nearly a season and a half, I have been very impressed. The two previous skis that BD has made that would compare to this ski (Helio 88 and Helio 76) were mediocre at best. Most of all, the 76 and 88 were both way too heavy for their respective sizes. Not so with the Cirque 84.

This ski feels really damp and stable for its size and weight, and in my experience their durability has been average if not better than average. Downhill performance is impressive too, as I usually do not enjoy skis this weight and size. They are excellent in firm snow, corn, and shallow powder, and have adequate performance in deeper powder and crud (what I would expect from a ski like this).

I only have two subjective gripes, the first is that I wish more skis like this were made in a slightly longer length, between 173 and 177 would be ideal, and that the graphics are boring and ugly.

That said, I would quickly recommend these skis to anyone looking for a dedicated ski mountaineering tool, who wants a mix of reliable, easy skiability in varied conditions, and low weight.
Comment on this review: 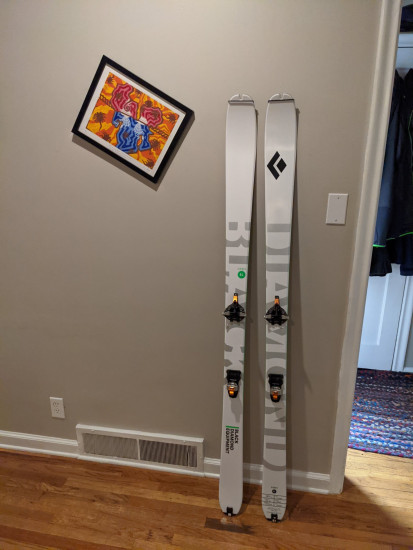 I bought a pair of Cirque84's to replace an older pair of Atomic Backland 78's. I find this size of ski to be perfect for spring missions, in-bounds fitness laps, and long walks in the woods, and I have not been disappointed by BD's new cirque line.

This is a "high utility" ski that offers predictability in variable conditions, good on-edge performance, and nimble movement. It is remarkably easy to pivot and jump turn with, and it is easy to handle in variable conditions. I wanted a ski that weighed a little less than the Backlands and floated a little more, and that's exactly what these are.

The ski isn't without limitations (there's a reason why we still have powder skis, right?) and it does feel a little nervous at speed - that being said, I've had it in 6" of fresh, where I found the rockered tip more than adequate at planing above the snow.

At just under 1kg, this ski is fantastic for long missions. I ski mine with a pair of Scarpa Alien RS boots, and the combination is phenomenal - responsive, fun to ski, and capable of performing well in a variety of conditions.
Comment on this review: 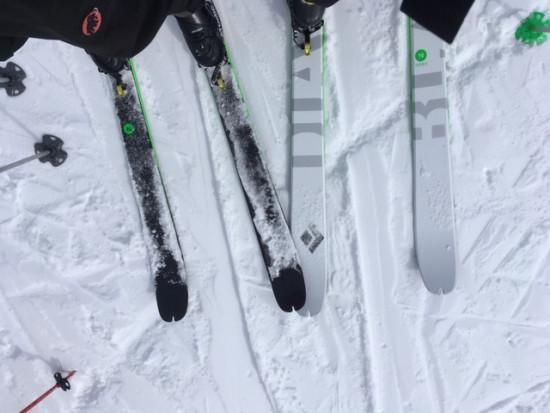 While Black Diamond may be much better known for their Wasatch-romping, wide-bodied powder skis, it would be a mistake to write off this climbing-world giant when it comes to skinny mountaineering skis. With the new Cirque ski line for 2020, BD has finally proved that all their years of interrogating steep-skiing luminaries such as Andrew Maclean for their ski-testing feedback didn't go to waste and that their designers have what it takes to compete with the Euro brands in the low-/mid-fat categories. Testing the new Cirque skis last spring, I was especially impressed with the mixture of precision and ferocity that the Cirque 84 demonstrated in mixed conditions, ranging from unyielding windboard to sludgy, unconsolidated mank. The ski took little input to pivot or tack around, even when paired with skimo race boots, but could hold a line traversing or straight-lining without difficulty. There's an effective balance of rocker/early rise in the tip that likes to rise up and plane out of the snow with little effort, mated to a relatively aggressive camber profile that wants to whip around from edge to edge. The tail is supportive, but not crazy stiff; you can definitely pilot the ski out of the backseat if that is your cup o' tea, much as you would with a "race-plus" ski such as the Movement Race Pro 85, but the ski can also reward a more forward/front-seat position á la Blizzard Zero G 85.

You could go up a size for that Blizzard-esque, straight-down-the-fall-line vibe, and to pair with bigger touring boots and more powerful technique; or down a size if you just can't quit your racer sensibilities and want to mount closer to pin-line and run race boots. For this season I chose to size down on the ski to give it more of a race-ski-ish feel and to match the spiritual center of my quiver, the Movement Gold Fish/Race Pro 71. I'll be using the Cirque 84 in a 171cm paired with Kreuzspitze/Ski Trab hybrid race binding, Colltex mohair skins and Alien 1.1 boots for much of my "day to day" touring up high this winter. Looking forward to putting the ski through its paces and seeing if it deserves a place among the mid-fat pantheon.
Comment on this review: