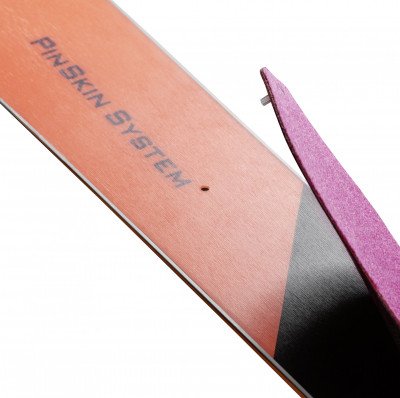 Dynafit's newest entry into the elite world of the sub-1000-gram ski is the Blacklight Pro, which they claim is made especially for "professional mountaineers." Whether you make a life, or a living, out of your time in thin air and wind-scoured snow, the Black Light Pro could be the ski that takes you to the next level of professional development. Coming in at only 200 grams heavier than many skimo race skis, but with the width and rocker to float confidently in dense powder and chalky couloirs, the Blacklight Pro puts an end to the idea that low-fat skis can't be versatile. A generous 116mm tip width (172cm length) and snappy 18.5m turn radius might tempt you to ski the Blacklight Pro as you would your powder boards, but when the good conditions stop and refrozen mank comes into view, don't be alarmed -- the unidirectional carbon layup and snappy paulownia core will keep your edging on-point and your hop-turning predictable. Early adopters will be interested in Dynafit's new Pin-Skin System, exclusive to the Blacklight Pro, which uses a small-diameter hole in the base of the ski as a rear skin fix. Instead of a traditional tail clip, which is heavy and bulky by comparison, the proprietary skin from Dynafit will include a small pin at the rear of the plush that inserts into the pinhole attachment -- making the skin as light and packable as a race skin, but with the added security of affixing to the ski base. Whether long ski tours have taken over your weeks or just your weekends, the Blacklight Pro is the ski to take along. 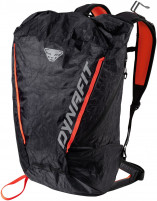 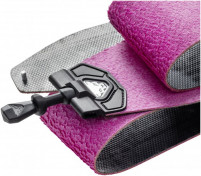 How do Blacklight Pro compare to Movement Race Pro 85 and what length would you recommend in either of those? I'm 186 cm / 74 kg. Thank you!
Answer from Cole P
Hello Karl, thanks for reaching out. The Movement Race Pro is a very popular ski but is considerably less stiff than the Blacklight Pro which makes the Movement more compliment and forgiving. The Blacklight Pro is a stiff mountaineering ski that requires an upper-intermediate to an advanced skier to make the most of it. Overall the Movement Race pro is a little more well-rounded and the Blacklight Pro will feel more sturdy and confident on steep terrain. For the lengths, I would recommend going with the 177cm/178cm if you are looking for an everyday mid 80's ski. If you are looking for an objective/mountaineering ski I would recommend going with the 169cm/172cm lengths.
Answer from Karl
Thanks Cole P, that's very much the answer I expected. What about Dynafit Carbonio 76 vs. Blacklight Pro? Sorry about all those questions I've been posting recently, don't mean to be a pain, just have some "tough" decisions to be made soon.
Answer this question:

How does this ski compare to the Movement Alp Tracks 85 or 89? The weights are nearly the same. I'd like to use it for extended tours and ski mountaineering.
Answer from Jeffrey
Ben, The Alp Tracks 85 is the more compatible ski. Think of the Alp Tracks 89 as the lightest All-mountain ski there is. With more overall width, especially in the tip, it will ski powder quite well. So if your extended tours include pow, it would be the best.
For long tours and mountaineering, either the Blacklight Pro and 85 will provide miles of smiles. The one most notable characteristic of the Pro is that it felt incredibly damp for such a light Carbon ski. That and its narrower and lighter profile will be the best for distance.
Answer this question:

Trying to decide between these and the Movement Race Pro 77 as a hard pack/spring mission ski after my beloved Alp Tracks 84s imploded. Specs seem very similar - any compelling reasons to choose one over the other? Are the Blacklights more durable?
Answer from Tristan M
Hi Oscar,

Between the two skis, durability will not be significantly different. The differentiating factors will be weight and ski characteristics. The Race Pro 77 will save you some grams. However, think of this ski as a race ski with larger dimensions. It will be less forgiving than the Blacklight Pro in more variable conditions. Additionally, the Blacklight Pro will have more float in that occasional spring storm. Both skis will excel on hardpack.
Answer this question:

Hi, I'm 6'2", 180 lbs and wondering if I should get the 172 or 178. These are my skinniest ski yet, and the shortest ski I have is 184 (Dynafit Denali). I want to use them for long trips, big objectives and couloirs (and I'm sure day tours). Going to put the Trab Vario.2 on them. Struggling with the size choice, as 172 feels so short, but I realize that may just be the name of the game... Thanks!
Answer from Zak M
Hey Nathan, I would suggest going with the 178cm length. If you're used to 184cm the 178cm should still give you a bit better control and versatility when it comes to performing jump turns while not feeling like super short toothpicks.
Answer this question:

Without being able to test most skis due to where I live I’m hoping someone with experience could compare these to the Black Diamond Cirque skis (78 or 84). Very interested in these or the cirques!
Answer from eric
Logan- The Blacklights have a little bigger shovel and float a little better in soft snow. Also the Blacklights will be a more powerful, stable ski. The BD Cirque 84 is a little softer, easier to turn ski, but still descent edge hold.
Answer this question:

How are these compared to the Dynafit Carbonio 76?
Answer from Julieana
Hey John, the core construction is different between the two. The blacklight pro is a really damp, really stiff ski. Super powerful and a lot of fun! It'll definitely feel more aggressive than the Carbonio 76.
Answer this question:

I'm looking for a lightweight set up for spring tours, resort training laps and races such as the Grand Traverse (at a relatively casual pace). What are your thoughts on the new Dynafit Blacklight Pro vs the Salomon X-Alp. I'm 6'0", thinking 170 or 172cm.
Answer from Zak M
Hey Tom, Dynafit markets the new Blacklight Pro as a ski for "professional mountaineers." While this is not to say that the everyday skier can't handle its characteristics, it is a tempting ski with a weight verse performance ratio that is extremely good. Overall the X-Alp will be a slightly quicker turning ski and a slightly more forgiving one at that. Both skis would be a good candidate as a lightweight fitness ski with the Blacklight Pro being the shining star for overall performance.
Answer this question:

What do you think comparing this to the new backland UL 78? Backland is a bit lighter, for mountaineering where some soft snow but also at times bulletproof...
Answer from Teddy Young
Thanks for reaching out, we really enjoyed the Blacklight Pro during the on-snow demo back in the pre-COVID times! I'd say that the Blacklight Pro is a bit damper and stiffer, and has a longer turn radius. It can also accept being driven by a more powerful boot! In comparison, the Backland UL 78 might be described as docile, quicker/easier to turn, and overall more playful!
Answer this question:

These are pretty awesome. I ended up with a 172cm instead of a 178 which affected my usage a bit. Once I realized they were essentially like a bigger, much more capable race ski, I really got the best out of them.

Of course, they won't charge through crud like a Beast ski but for ski mountaineering, they are great. They're very light, very snappy and responsive, and burly enough that you can ski a bit faster than you would on a pure race ski. Pair them with a race binding and you've got something you really could actually race in. I have often found myself grabbing my TLT8/Blacklight combo rather than my PDG/PDG race gear for training sessions and spring ski mountaineering.

These are just a bit more fun to ski in corn or a bit of pow with barely any weight cost.

My only complaint is Dynafit doesn't make a version that's 100 underfoot for mid-winter pow skiing!
Reply from Jeffrey
Eric and all Blacklight enthusiasts.
21/22 Dynafit is delivering the Blacklight 95 for an ultralight Powder ski.
Comment on this review: