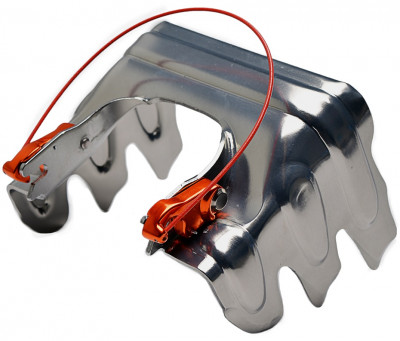 In addition to being a fantastic accessory to the ZED and ION bindings, the G3 ION ski crampons could be called the universal crampon due to their second, 'direct to ski' mounting option. Of course, if you use it with the ION, it's even easier-- just slide the included receptors under the toe pieces and screw them in. With its unique corded attachment system, the ION ski crampons can be installed or removed easily with one hand. G3 wanted to prove that they always think of everything, so the crampon features a humped profile to allow your boot to drive it into the snow even while using your risers. Last but not least, it’s shiny! Look good and grip even better with the G3 ION ski crampons.

I have Völkl BMT 94's. Any chance they'd work with the 85 crampons or should I just stick to the 95s?
Answer from jbo
Hi wtofd, definitely the 95s. Ski crampons aren't bendable like brakes.
Answer this question:

Will the G3 Ion Crampon work with NTN Freeride bindings?

Alan
Answer from Jeff
Alan, These come with a mounting kit that will work with almost any binding. BUT, the NTN system takes up all the real estate under the boot and I don't see that it will work .
Answer this question:

Any chance these would work with Fritschi Tecton Bindings? (everyone is out of stock for the Fristchi crampon, so I need a backup solution)
Answer from Jeff
Mel, NO, Both these and the Fritschi crampons are very unique and wildly different from the Dynafit styles.
Skimo Does have the Tecton crampon in 90 and 100mm in stock here. Fritschi crampons
Answer this question:

Any idea if the 105 size would fit the Salomon QST 106?
Answer from Nate
Hi Parker, I just took some measurements and while it will be close, I think you'll have enough clearance for it to work nicely.
Answer this question:

This is a bit of a long shot, but here goes...
Is the G3 crampon compatible with the Kreuspitze telemark plate? I noticed that the the connections look very similar, and it would be super good luck if they could be mounted straight on to the telemark plate without the need for the G3 bracket. Do you have both to hand???

The reason for my interest in this idea apart from simplicity, weight saving and less hole drilling, is a desire to have the pivot point of the crampon as far forward as possible. The kreuspitze plate already takes up valuable space behind the binding toe, and I have concerns that using a dynafit style crampon mounted behind the plate will mean that the boot will not force the crampon down enough, especially on mid to high riser settings.

Can you offer any advice on the most suitable (effective) crampon system that would work with the kreuspitze telemark plate?

Thanks
Answer from Nate
Hi Rob, I gave it a shot to see if it would work, but it is not compatible. The Dynafit crampon mount would actually be further ahead on this system than the G3 would have been anyway. The Dynafit crampon attaches to the back of the toe piece. This is closer to the front of the binding system than the spring attachments where you were hoping the G3 would attach.
Answer this question:

I have ION LTs. Will these work ok with the new Scarpa F-1 boots?

looking at the 105 mm crampon size for my Wailer 99s.
Thanks
Answer from jbo
Hi Raymond, yes they work no problem when used with ION bindings. The issue with different boots pops up with other bindings that have lower toe pins.
Answer this question: 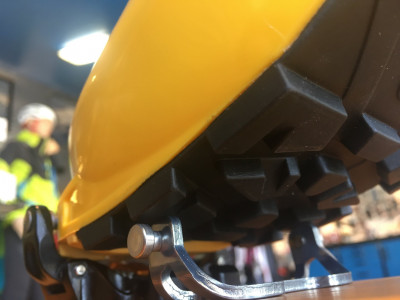 Hey David, thanks for reaching out! I tested the crampon adapter on the Backland binding with a La Soprtiva Syborg Boot (race boot, the rubber tread isn't very tall) and wasn't able to get enough clearance for the boot to land on even the tallest riser without hitting the crampon mount. The Backland is designed to work with a Dynafit style crampon though, so that's definitely what I'd recommend.
Answer from Trace Leches 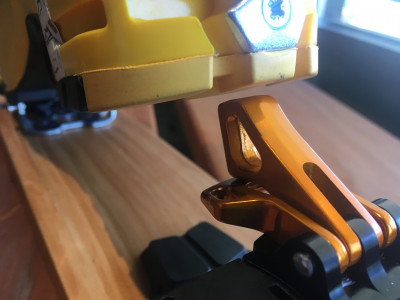 The highest Backland riser is TALL and the Syborg still didn't quite land on it with the crampon adapter underneath it.
Answer this question:

I love the concept. However be forewarned, the G3 adaptor does not fit all tech bindings. The crampon attachment prongs sat up so high it interfered with my TLT superlight / boot connection. Bummer, because I think it is a clever idea.
Reply to this comment:

I like the quick release design of these crampons. Much easier to use without stepping out of the binding and seem to come with no risk of accidentally releasing. They feel quite similar to my Dynafits as far bite goes.
Comment on this review:

I have a question about the g3 ion ski crampon. My ski (FACTION ct3) is 108 at the waist. Is there a chance that the 105 will work form me or will I need to get the 130 for sure.
Answer from jbo
Hi Steve, I don't have that ski to test, but there is roughly 4mm of wiggle room on these. It depends on how big your foot is since the further the toe moves from center the wider the crampon has to be. The 105s will be close on this setup, it might rub a little.
Answer this question: