The Traction Pattern bases of the Voile Hyper Vector BC allow the adventurous skier to quickly dispatch with long, flat approaches and rolling terrain with much more efficiency than using traditional climbing skins. This is due to the time saved on transitions as well as superior glide over climbing skins. When employed in the right areas, the Hyper Vector BC is the ski that will take you further and allow you to find the areas where you won’t be competing with others for tracks. Perfect for those true adventurers with big plans over vast terrain, the scaled version of the Hyper Vector is made with the same modern lightweight core. It also boasts Voile’s legendary durability so you don’t have to worry about your gear out there. The Hyper Vector BC will take you further than ever before.

I'm impressed with this ski - the scales work well on the up, and it turns well on the down, even carves. Ski likes late-season hardpack. Definitely improved since the old "baby blue" version - a bit softer, with longer tails. I was actually able to climb all the way to top of Alta's Supreme lift, without using skins even once!
Comment on this review:

Looks like you are sitting in the backyard playground dropping the green mountain corn crud! Was looking for a good variable snow ski with scales that would allow me to safely ride anything from the back bowls to the notch chutes as well as be able to hit tucks, ammo, gulf. Is this my well rounded buddy?
Answer from Brett S
Thanks for your question, Greg. For what you've described, the Hyper Vector BC sounds like the ski for you! Please let us know if you have any other questions.
Answer this question: 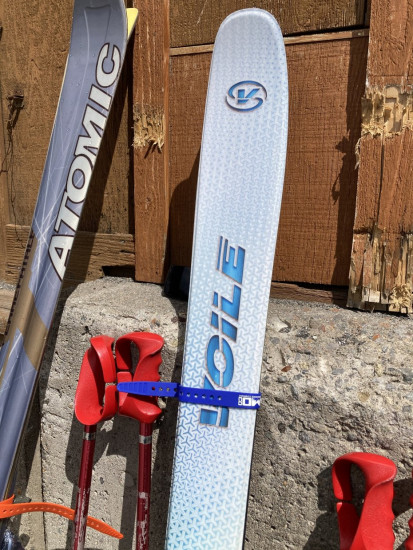 I have 5 days of spring skiing on the Ultra Vector BCs - two days of touring and three days downhill skiing. Teamed with Dynsfit TLT8 boots and G3 ZED 9 bindings, they have been great in both applications. The fishscale bases climb really well; as well as my Fischer 88 XC skis. They make spring touring fun by avoiding the drag from having to skin everywhere. At the resort, they are fun in the spring snow. They carve right through mash potato snow. They’re not as happy on icy morning slopes, but they’re still solid and predictable.

I’m looking forward to taking these on overnight tours. Their light weight and capability to tame most conditions should make for loads of fun. I’ve been a committed tele skier for 40 years. These skis are are practically as light as my 3-pin set up and much less work.
Comment on this review:

The Voile Hyper Vector has a relatively forgiving construction as well as tip and tail rocker. This means that it "skis shorter" than other skis of an equivalent length. At 5'10". I think the 164cm might be a little short for you. The 171cm length will provide more stability at speed, but should still come around easily for those tight New England Trees! For availability on that length, reach out to us at help@skimo.co.
Answer this question:

I am an aggressive 6' skier whose weight fluctuates between 145 to 155 lbs. I have never used a scaled downhill ski, so I am wondering if my weight would be enough to flatten the skis' camber so I can get sufficient grip when ascending. I am used to skiing longer skis, but was considering the 171 cm model. This would be a purely backcountry / sidecountry ski for me. Any input or advice would be much appreciated.
Answer from Julieana
Hi Jack, yes you'll be able to flatten the skis for ascending no problem! If you end up on steeper ascents you can also use skins with these skis. If you're looking for a nimble, lightweight ski that's great for traveling mellower terrain I think the 171cm length will be just fine for you.
Answer this question:

I am 6’ and 170lbs. What length would you recommend I purchase for Voile Hyper Vector BC?
Thank you for your help.
Answer from Cole P
Hey Mark, you could go with the 171cm or the 177cm, just depending on what you're after in the ski. If you want something more stable with better flotation, go with the longer length. If you want something a bit more "nimble" and better for tighter spaces, go for the shorter length. Please let us know if you have any other questions!
Answer from Mark P
Cole
I purchased Atomic Backland Carbon boots from Skimo Co last year. Will they work with Voile Hypervector BC?
Answer from Cole P
Hey Mark, the Atomic Backland Carbons will work great for the Voile Hypervector BC.
Answer this question:

This may have been answered with Bob's question above. Ski length suggestions?
I'm 5'8" (172cm) and 155lbs. New to backcountry touring.
Was looking at the Hyper Vector BC with a 171cm length. This length would make them about mid-forehead. 164cm seems a bit short, but maybe not. But, I'm open to suggestions.
I can see a benefit to the fish scales to save almost constant skinning on and off.
Will be primarily skiing the dry powder and rolling hills of Idaho, rare using lift assist and resort use. Rare steep climb, but one never knows.
Answer from Patrick C
Gary,

Thanks for reaching out! The 171cm seems very appropriate for your application. Benefits to the shorter skis would be more maneuverability in tight trees or shoots and a little more grip from the fish scale pattern. Given that you are talking about open areas at low angles the 171cm will give more float and better glide so I would lean in that direction. Hope this helps!
Answer this question:

The 164cm will be spot on. It will be an easier turning ski in the trees, tight couloirs and make for easier kick turns on the skin track. Without too much early rise and just a bit of tail rocker the Hyper Vector will ski like a longer ski compared to some other Voile's that have more rocker in the tip and tail. Happy skiing!

Similar question to Dan's. What length in this ski for 200 lb guy, 6’3”, who will use this for skiing tight trails and trees across rolling wooded terrain of fairly mild slope? Expect variable conditions. Most my skis are in the ~183 range, including Voile Hyper V6. Could I get away with 177 cm length -- or should I stick with the 184 length for this setup? Thanks!
Answer from TSB
Hey JT XXII, the Hyper Vector gains a little bit of running length/effective edge over a V6 of the same size, so bumping down to the 177cm wouldn't be a huge disadvantage in terms of overall feel. By going a little shorter, you also gain the ability to maneuver more quickly in tight trees, both in terms of going down and skinning up (shorter skis are easier to kick-turn). I'm about your same size and have found the 177cm to be plenty of ski (my review is below). I actually think it's comparable to the old baby-blue Vector ski in a 180cm due to a little more tip rocker and more torsional rigidity.
Answer this question:

Hello, any intel on what Voile will be doing for their 2020 hyper series for tele bindings? I saw the current ones arent tele safe.
Answer from jbo
Hi Curt, nothing specific, sorry! It's still officially "mount at your own risk" with tele bindings.
Answer this question: 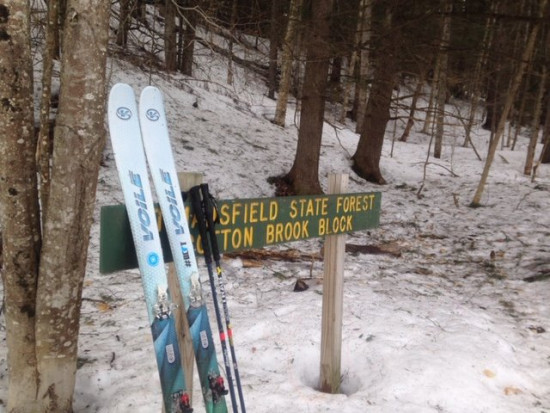 What's to say about Voile's scaled skis that hasn't already been covered, either by the tele sites, the backcountry mags, or various internet bloggers (pundits)? Well, for one thing, if you are a backcountry skier and you do anything other than lapping uber-cold powder (skins required), or scary mountaineering exploits where your skis are on the pack most of the time, a pair of "BC" version Voiles will serve you quite well. Whether it's the nordic kick and glide and superlight performance you can get from the Objectives, hut-touring and powder bliss on the Vector, or low angle glade lapping on the V6, all of the scaled Voiles have been super fun and effective for me. Each flavor is slightly different, but they're all excellent. That said, the Hyper Vector BC is certainly my favorite of the bunch because they're A) the stiffest, B) the lightest (for the girth -- Objectives still have the edge for pure rando weight savings), and C) the best in hard snow. Actually, really the *only* ski that's been good in hard snow, since the V6 is basically a powder ski and the Objectives definitely have a soft snow preference going (traded my standard-version Objectives for Movement Alp Tracks 84, and my BC's for Hyper Vector BC's). I do think the "Hyper" layup loses a bit of flex/feel to the original Vector of the 2013 era, but I actually like it better than the "Ultra" Vector that had a brief stint in the lineup. the ski still has plenty of rocker, enough camber to be satisfying to the nordic nerd in me and the often-remarked-on Voile characteristic of turning super easily. While my Objective BC's spent more time as a quiver-slotted XCD ski and choice for rolling, low-angle tours or approaches to lines, the gains in hard snow handling made the Hyper Vector an easy pick for most any tour this past winter. I bashed the skis through brush, took them to huts, broke trail in low-angle powder, left my skins at home in the slush, skated them on snowmobile tracks, and generally put them through the Northeastern wringer. Next year...same idea, but with race boots (this year:TLT7's).
Picture: late season, slushy and dirty down low, cream and corn up high -- Hyper Vectors for a 7.5 hr tour, skins on for only 1 climb (of 5 or so).
Reply from TSB
Greg, I think you’re spot-on with that assessment! I probably wouldn’t take this ski up high on Washington since it’s a bit wider than what I like using for more mountaineering-style applications, but for more below-tree line touring in the NE the Hyper Vector BC is dialed. For the “one ski to do it all” in the Northeast with a mountaineering/steeps/big vert focus, I’d nudge you toward something more like a Ski Tran Stelvio or Magico.2, which would
be a more confident edging platform and also take the abuse meted out by our unforgiving rocks a bit better.
Comment on this review:

Hey, just wondering how much resistance you feel from the scales while skiing? Also, just wondering what size You'd recommend? 171 or 177. 5'8" 140lbs
Answer from Jeff
Shane, that is a question that's as old as " Fish Scale " skis. How much resistance and how well they grip depends on the terrain and snow conditions you plan to use them. If you are doing rolling terrain ( not much steep climbs) and in mostly settled snow conditions, most people love them. When using in snow on either end, light powder or frozen old snow, they tend not to grip much. More to your question of resistance, there is not much. Most common complaint I have heard over the years is the noise they make on older/firm snow conditions.
Answer this question:

What length in this ski for 190 lb guy (in my underwear), 5’ 10”, who will use this for skiing tight trails and trees across rolling wooded terrain of fairly mild slope? Vermont. Eastern snow. Highly variable conditions. Mix of following existing skin tracks and making my own fresh tracks to explore new glades. Currently ski old Karhu Guide 175’s. Looking to update my touring setup. For true AT downhill I use Rossignol Sky 7’s in a 180 length. Thx for your input.
Answer from Trace Leches
Hey Dan! I think I would shoot for the 177cm length in this ski. 171cm seems a bit short and the longer 184cm seems unwieldy for your usage.
Answer this question: